A lot of people still get paid to sit in offices and do repetitive tasks. In recent years, however, employers have been pushing harder to find ways to outsource that work to machines.

Venture and growth investors are doing a lot to speed up the rise of these worker-bots. So far this year, they’ve poured hundreds of millions into developers of robotic process automation technology, the term to describe software used for performing a series of tasks previously carried out by humans.

Process automation funding activity spiked last week with a $225 million Series C round for one of the category leaders, New York-based UiPath. Sequoia Capital and Alphabet’s CapitalG led the financing, which brings total capital raised by the 13-year-old company to more than $400 million, with a most recent valuation of $3 billion.

A Crunchbase News analysis of funding for startups and growth companies involved in robotic process automation indicates this has been a busy year overall for the space, with more than $600 million in aggregate investment across at least seven sizable deals.

Below, we spotlight some of the largest 2018 rounds in the space:1 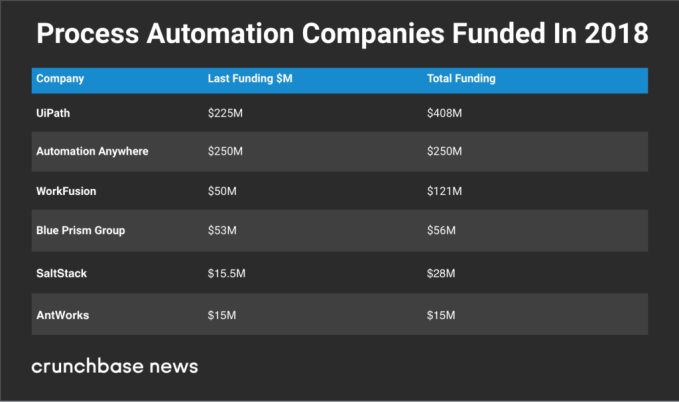 UiPath, for its part, has a grand vision and an impressive growth rate. Its broad goal, laid out to incoming employees, involves “liberating the human workforce from tedious, repetitive tasks.”

And employers are willing to pay handsomely to liberate their employees. UiPath said that in one 21-month period, it went from $1 million to $100 million in annual recurring revenue, an absolutely astounding growth rate for an enterprise software company.

The other big unicorn in the process automation space, Automation Anywhere, is also in rapid expansion mode. The company said customers have been using its tools across a broad range of industries for tasks including integrating data in electronic medical records, streamlining mortgage applications and completing complex purchase orders.

One might ask: What are employees to do all day now that the bots have freed them of their tiresome tasks? The general refrain from UiPath and others in the process automation space is that their software doesn’t eliminate jobs so much as it gives workers time to focus on higher-value projects.

That may be broadly true, but there is a significant body of employment trend forecasting that predicts widespread job losses stemming from this kind of automation. It could take the form of layoffs, or it might not. Companies may indeed transition bot-displaced existing employees to other, higher-value roles. Even if they do that, however, process automation could enable reduced hiring for future jobs.

That said, there’s plenty of funding and hiring happening at the handful of high-growth companies that could determine whether the rest of us have a job in our futures.