Apple’s announcement last week of a Watch with an FDA-approved ECG reader to track heart health looked to be the undoing of original ECG reader company AliveCor. But, to prove it still has a hearty pulse, AliveCor tells TechCrunch it is coming out with a “never-before-seen” 6-lead electrocardiogram (ECG), pending FDA approval.

In a care clinic, a patient typically has 12 leads, or stickers placed across their chest to pick up data from their heart. However, other ECG readers typically have one or two leads. The Apple Watch places a single lead system on the wrist. The 6-lead ECG reader is, in theory, more accurate because there are more sensors picking up more information, which could be critical in saving lives.

AliveCor’s and the Apple Watch’s current function is to pick up AFib — or the detection of an irregular heart beat. AliveCor announced earlier this month it had received FDA-approval to use its ECG readers to detect a rare but dangerous blood condition called hyperkalemia.

With 6-lead ECG readers, the AliveCor device could also pick up about 100 different diseases, according to CEO Vic Gundotra, who rattled off a bunch of long-worded maladies I can’t even begin to pronounce but he’s hoping his reader will soon be able to detect. 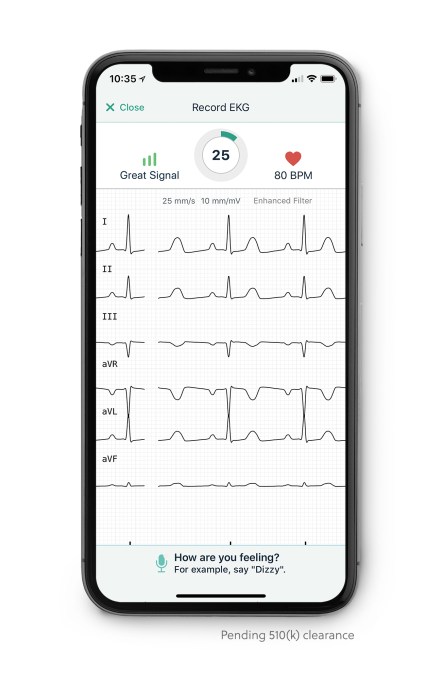 However, one important detection would be ST elevation — one of the key factors associated with the onset of a heart attack and which could get a person on their way to the hospital before they start displaying other physical symptoms.

Of course, Apple — which already holds 17 percent of the wearables market — could easily decide it, too, needs to add a 6-lead ECG reader to the Watch and beat AliveCor’s market yet again. But Gundotra shrugs at that suggestion.

“They could but we have some pretty good patents in the space,” he told TechCrunch, adding “Apple has done me a great service, actually. We’re a small company but you are talking to me, calling about this [because of their announcement].”

No formal name has been announced yet for the 6-lead product, but AliveCor will be working with the FDA on the regulatory pathway for it and hopes to bring it to over-the-counter consumers by 2019.