In the 1990s when the web was young, companies like Yahoo, created directories of web pages to help make them more discoverable. Hacera wants to bring that same idea to blockchain, and today it announced the launch of the Hacera Network Registry.

CEO Jonathan Levi says that blockchains being established today risk being isolated because people simply can’t find them. If you have a project like the IBM-Maersk supply chain blockchain announced last month, how does an interested party like a supplier or customs authority find it and ask to participate? Up until the creation of this registry, there was no easy way to search for projects.

Early participants include heavy hitters like Microsoft, Hitachi, Huawei, IBM, SAP and Oracle, who are linking to projects being created on their platforms. The registry supports projects based on major digital ledger communities including Hyperledger, Quorum, Cosmos, Ethereum and Corda. The Hacera Network Registry is built on Hyperledger Fabric, and the code is open source. (Levi was Risk Manager for Hyperledger Fabric 1.0.) 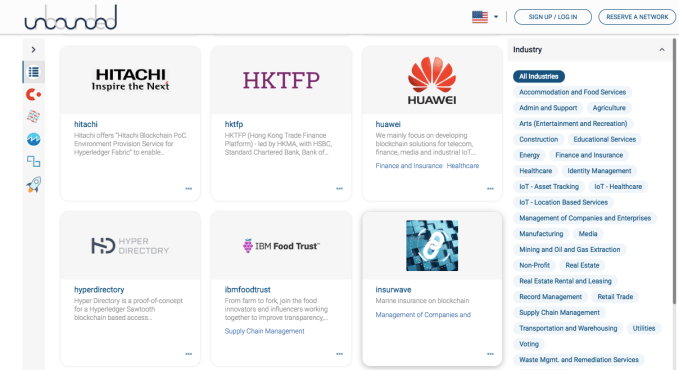 While early sponsors of the project include IBM and Hyperledger Fabric, Levi stressed the network is open to all. Blockchain projects can create information pages, not unlike a personal LinkedIn page, and Hacera verifies the data before adding it to the registry. There are currently more than 70 networks in the registry, and Hacera is hoping this is just the beginning.

Jerry Cuomo, VP of blockchain technologies at IBM, says for blockchain to grow it will require a way to register, lookup, join and transact across a variety of blockchain solutions. “As the number of blockchain consortiums, networks and applications continues to grow we need a means to list them and make them known to the world, in order to unleash the power of blockchain,” Cuomo told TechCrunch. Hacera is solving that problem.

This is exactly the kind of underlying infrastructure that the blockchain requires to expand as a technology. Cuomo certainly recognizes this.”We realized from the start that you cannot do blockchain on your own; you need a vibrant community and ecosystem of like-minded innovators who share the vision of helping to transform the way companies conduct business in the global economy,” he said.

Hacera understands that every cloud vendor wants people using their blockchain service. Yet they also see that to move the technology forward, there need to be some standard ways of conducting business, and they want to provide that layer. Levi has a broader vision for the network beyond pure discoverability. He hopes eventually to provide the means to share data through the registry.