Another year, another set of brand spankin’ new iPhones. But this year, little has been left to the imagination as leaks have continued to spring up over the course of the past few months.

Today, however, the new iPhone becomes official. Apple has introduced a new models of the premium iPhone, the iPhone XS, which comes in three finishes, gold, silver and space grey.

So let’s take a look at the details.

The new iPhone doesn’t look all that different from the iPhone X, but that is always the case with the “S” years. The phones come in gold, silver and space grey and are made with surgical grade steel, as well as a new glass formulation for durability.

The Apple team has also upgraded the dust and water resistance of the iPhone, bumping it to IP68 rated, with water resistance up to 2 meters deep for several minutes. Schiller added that the phone was tested in many liquids, including orange juice, tea, wine and beer.

The new display on the iPhone XS is a Super Retina OLED display, but it has 60 percent greater dynamic range than the previous generation. Displays come in two sizes — 5.8-inch and 6.5-inch — with 458 pixels per inch.

The bigger phone is called the iPhone XS Max.

Unfortunately, on both models, that notch is still hanging out at the top of the phone, but not without good reason. Housed in that sliver of bezel is an infrared camera, flood illuminator, ambient light sensor, proximity sensor, speaker, microphone, front camera, and dot projector. Much of this, of course, allows for FaceID to continue on this next gen of the iPhones. It has a faster secure enclave and faster algorithms have improved FaceID in the iPhone XS, with Phil Schiller saying it’s the most secure facial authentication in a smartphone ever.

Perhaps the biggest spec upgrade on the iPhone XS is the new A12 Bionic chip, the industry’s first 7nm chip with 6.9 billion transistors. It has a 6-core CPU, with two high-performance cores that are 15 percent faster and 40 percent lower power than the A11. There’s also a new 4-core GPU in the A12 that’s 50 percent faster with tessellation and multilayer rendering.

Plus, there is a new neural engine with an 8-core dedicated machine learning processor. 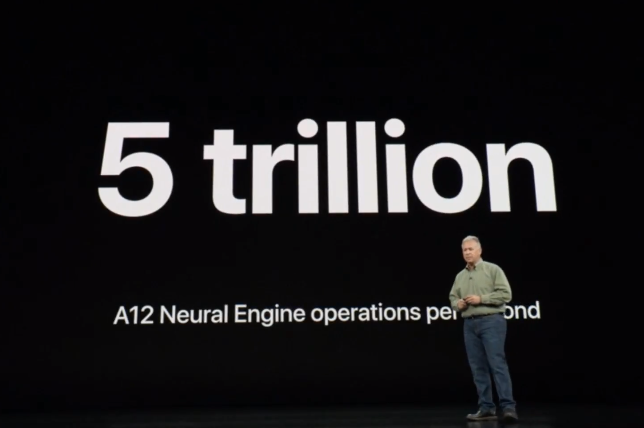 So how does that translate to real-world use? Well, the new iPhone XS is capable of 30 percent faster app opens thanks to that A12 Bionic chip.

As is standard with Apple, the company gave some other examples of how this processor will change the way we operate on our phones, including software upgrades from iOS 12 like AR, Memoji, and Siri shortcuts. Apple also did a demo from Bethesda showing off the A12 powering the new Elder Scrolls Blades game.

In the storage department, the iPhone XS comes with up to 512GB of storage.

The camera has always been a huge feature for the iPhone and this next generation is no exception. 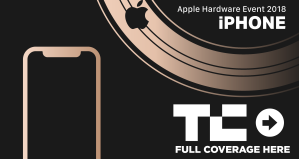 The XS features a 12-megapixel wide camera and 12-megapixel telephoto lens sensor as part of the ongoing dual-camera system on the iPhone. There are, however, new sensors in the wide camera offering a f.18 aperture, with a f.24 aperture on the telephoto lens. TrueTone flash has also been updated with an advanced flicker-detect system.

On the front side, you’ll find a 7-megapixel camera with f2.2 aperture and a faster sensor.

The A12 Bionic chip is helping out, and is now part of the image processing chain with the Image signal processor inside. This offers better facial ‘landmarking’ for red eye reduction and improved portrait mode.

Plus, Apple is introducing something called “Smart HDR.” As Panzarino noted in the live blog, “basically it shoots additional frames of highlight and shadow detail and then uses the Neural Engine to pick the best ones to combine into an HDR photo. This is more frames and theoretically more range represented in the photo than iPhone X.” 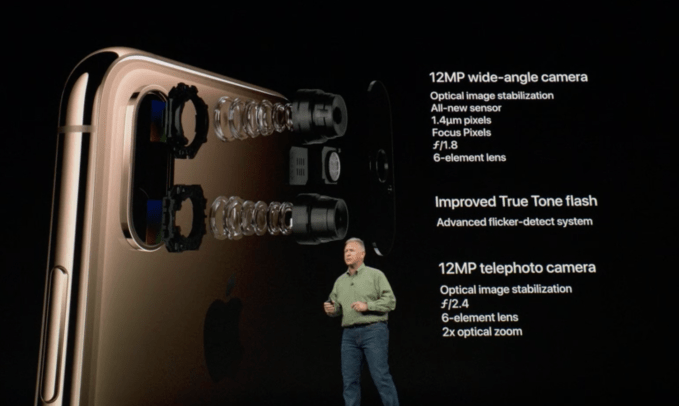 Apple has also improved ‘bokeh’ effect, which is the removal of focus or the addition of blur in the background of portrait mode photos. The improvements allow for smoother transitions from foreground to background and better bloom of background shapes.

In terms of video, the biggest and most obvious upgrade is that users can record full stereo audio.

For the first time, Apple is debuting dual-SIM support for the iPhone XS and iPhone XS Max. With the exception of China, this will be accomplished through eSIM (or, electronic SIM cards), which will give users the option for a physical SIM slot and a complimentary eSIM.

In China, the iPhone XS will be made with two physical SIM slots because Apple can’t do eSIM in that region.

Put plainly, dual-SIM support allows a user to have two phone numbers on a single phone, like a domestic phone number and an international carrier.

Pre-orders begin on Friday, September 14, and the products will ship (and be available in store) on September 21.