Much like smartphone manufacturers, drone companies have been adding to devices plenty of features over the past several years while making only modest improvements to battery life. But while your phone may boast “all-day” usage, a lot of the top drones only register flight times between 20-35 minutes.

Impossible Aerospace is looking to change up that equation, at least when it comes to commercial drones, with a dense design that is basically all battery. The company shared launch details of its US-1 drone today, and announced that it had closed a $9.4 million Series A from Bessemer Venture Partners, Eclipse Ventures and Airbus Ventures.

Its first product is a drone that can most notably stay airborne for about 120 minutes in optimal flying conditions, with a 75km (over 46 miles) straight-line range. It can carry 2.9 pounds of payload, but that drops the total flight time to 78 minutes. 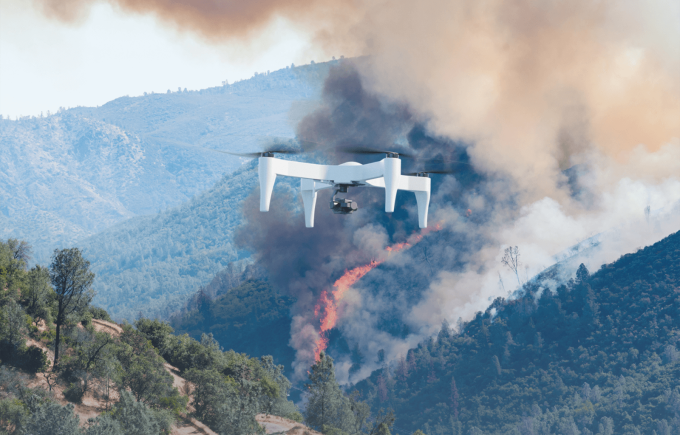 For commercial customers, the added flight time can dramatically free up use cases, changing the mindset of operation from mission-based to much more exploratory.

The company’s website has an almost comical X-ray diagram of the US-1’s battery makeup showcasing a design that just looks like a big “X” of battery cells. Around 70 percent of the 15-pound drone’s weight is lithium-ion batteries, the company tells me.

This is a design built for old-school drone pilots; in order to achieve their lengthy flight time they had to ditch some additional components, the most controversial choice probably being the lack of any onboard obstacle-avoidance sensors. “Every aircraft design is a compromise,” Impossible Aerospace CEO Spencer Gore told TechCrunch in an interview. “There’s nothing that’s harder than to figure out what features you will include for some users that hurts the performance for everybody else that’s not going to use them.”

Gore said there were certain features the startup knew it wanted to drill down with its first drone and that the company had an “exciting product roadmap” of designs that made some different choices.