In March, Walmart announced it was partnering with Handy to sell its in-home installation and assembly services in over 2,000 of its brick-and-mortar retail stores. Now, that partnership is expanding to Walmart’s e-commerce site, too. This week, Walmart began offering online shoppers the ability to add Handy services to their cart at checkout. This allows customers to order in-home installations for things like mounting TVs, or get help with assembling their furniture, among other things.

The news was first reported by Bloomberg on Wednesday, when Handy became available to online shoppers. However, the full rollout of Handy across Walmart’s e-commerce site will continue throughout September – meaning, if you don’t see the option now, you will fairly soon.

Founded in 2012, New York-based Handy lets anyone book household services like cleaners, plumbers, handyman services, and more. The company, which is backed by $110 million in VC funding, has grown over the years to over 80,000 service professionals on its platform, and has served over half a million customers over half a million bookings.

Being offered by Walmart both in stores, and now online, has been a big win for the services provider, as it greatly expands its ability to reach customers without having to spend on marketing. 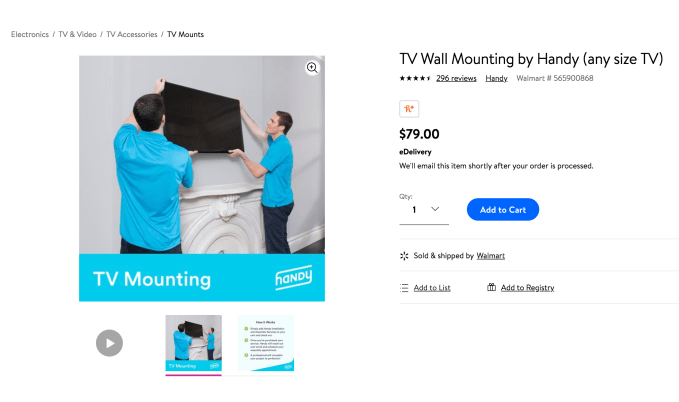 Via the Walmart.com U.S. website, Handy will be offered for indoor projects, including furniture assembly ($95), hanging TVs ($79), installing ACs ($90), and a number of others like hanging ceiling fans, installing garbage disposals, installing lighting, and more. Handy says the range of services may be expanded in the future. In addition, Walmart may choose to offer Handy’s full range of services at some point – which includes things like housecleaning and various handyman services.

Services are a critical area for online retailers, and one where Walmart’s chief rival Amazon has been ramping up over the years, following the official launch of its Home Services site in 2015. Since then, Amazon has been expanding its services business to include those that help customers set up their smart home, and, most recently, install home security systems like Amazon’s Cloud Cam, Ring doorbell, and others.

By enabling more customers to add smart home devices, Amazon also helps to boost its Amazon Echo / Alexa device business, too – as smart home control is one of the primary use cases. Over time, Amazon can monetize its Alexa home through subscriptions and skills purchases, voice ads, shopping, and more. 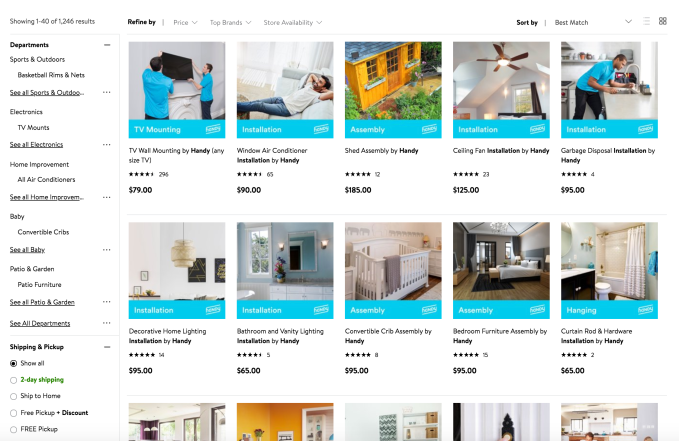 Adding services to e-commerce sites allows retailers to also generate more revenue from online shoppers, without having to stock more inventory. Customers benefit as well, since installation and assembly services were traditionally offered by the brick-and-mortar stores they once frequented, but were slower to arrive online.

IKEA is also venturing into this space – it acquired TaskRabbit in fall 2017, and then rolled out its own furniture assembly service earlier this year, both online and in stores.

Walmart, meanwhile, has a history of leveraging partnerships to venture into areas where it wants to challenge Amazon and others.

The Handy installation services will be available via Walmart’s website in the U.S. when the rollout completes in September.