What good is 3D? Does depth give you anything worthwhile in an interface that’s most likely flat anyway? Is “immersion” as a metric really worth that much?

Even as a ton of startups and big companies have invested in 3D-centric hardware and software, there has undoubtedly been some pushback on whether it’s all that necessary. I grappled with some of these questions when I played with the latest project from Looking Glass Factory, a desktop volumetric display that they see as so central to the company’s goals that they’ve just named it the Looking Glass.

My experience with it left me a bit perplexed with where the tech would end up, but god dammit was it cool anyway.

The display is beaming 45 views of an object, each at 60 frames per second delivering images that you can peer around and see multiple angles of. How it works is that the display is basically sending out a fan of perspectives which can be observed by multiple people from multiple perspectives. No matter what you initially hear about the technical details of how it all works, there is a certain degree of disbelief baked into seeing a volumetric display like this for the first time. It’s like… looking into a fishbowl of pixels. 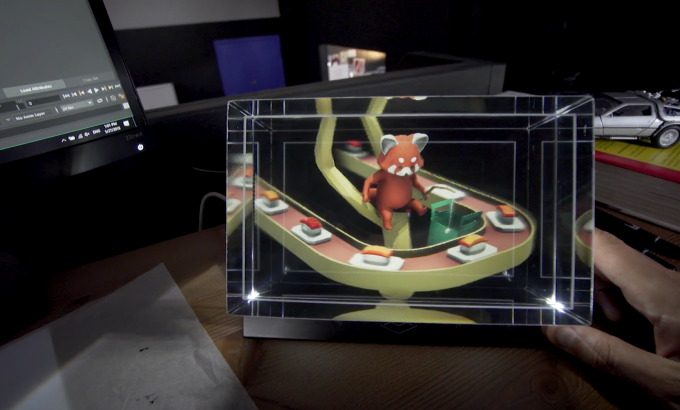 Looking Glass Factory has been around since 2015 and has already shipped quite a few products that broadly fit into the world of holograms, this one comes at a time where it has the chance to be a little bit more than a toy for designers and creative types. Rather than putting on a headset, the company argues, this product offers these people the chance to easily see what they’re working on and show it to other without tossing a headset around.

The display is a fascinating pairing for the recent buildup in platforms and stores for 3D digital assets. It’s easier than its ever been to build a 3D scan of something now that there are sophisticated camera arrays on devices like the iPhone X, similarly large tech cos are looking to buy into the AR/VR development process with 3D digital asset libraries that can be easily accessed.

I’m a bit torn on how far out I see the use cases for a volumetric display type like this actually extending, but this does specifically seem like a very intriguing tool for a 3D creator who’s building their own models and wants to see them visualized in a more immersive way. Is it solving an essential problem for them? I wouldn’t say so, but it’s such a weirdly interesting technology that I don’t doubt they’ll be able to move some units to an early adopter crowd that’s generally aching for this type of stuff. Most of these Kickstarter upstarts are peddling pipe dreams, but Looking Glass Factory has been working on this stuff for awhile and whether or not you actually do need it, they’ve got it.