What Robinhood did to democratize buying individual stocks, Titan wants to do for investing in a managed portfolio. Instead of being restricted to rich accredited investors willing to pour $5,000 or even $500,000 into a traditional hedge fund that charges 2 percent fees and 20 percent of profits, Titan lets anyone invest as little as $1,000 for just a 1 percent fee on assets while keeping all the profits. Titan picks the top 20 stocks based on data mined from the most prestigious hedge funds, then invests your money directly in those with personalized shorts based on your risk profile.

Titan has more $10 million under management after quietly spinning up five months ago, and this week the startup graduates from Y Combinator. Now Titan is ready to give upscale millennials a more sophisticated way to play the markets. 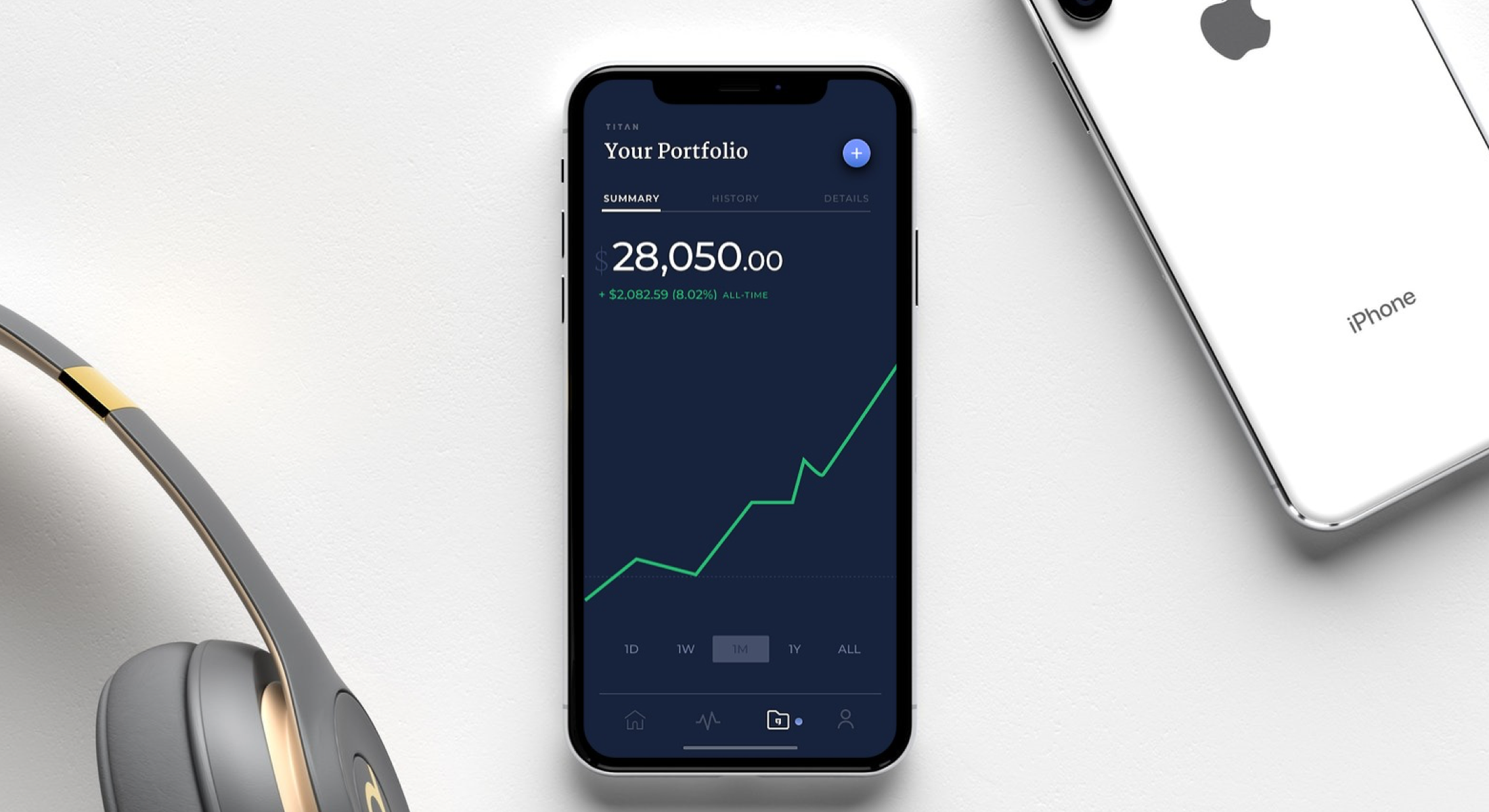 This startup is hot. It refused to disclose its funding, likely in hopes of not tipping off competitors and incumbents to the opportunity it’s chasing. But it’s the buzz of YC, with several partners already investing their own money through Titan. When you consider Stanford-educated free stock-trading app Robinhood’s stunning $5.6 billion valuation thanks to its disruption of E*Trade, it’s easy to imagine why investors are eager to back Titan’s attack on other financial vehicles.

“We’re all 28 to 30 years old,” says co-founder Clayton Gardner about his team. “We want to actively invest and participate in the market but most of us who don’t have experience have no idea what we’re doing.” Most younger investors end up turning to family, friends or Reddit for unreliable advice. But Titan lets them instantly buy the most reputable stocks without having to stay glued to market tickers, while using an app to cut out the costs of pricey brokers and Wall Street offices. 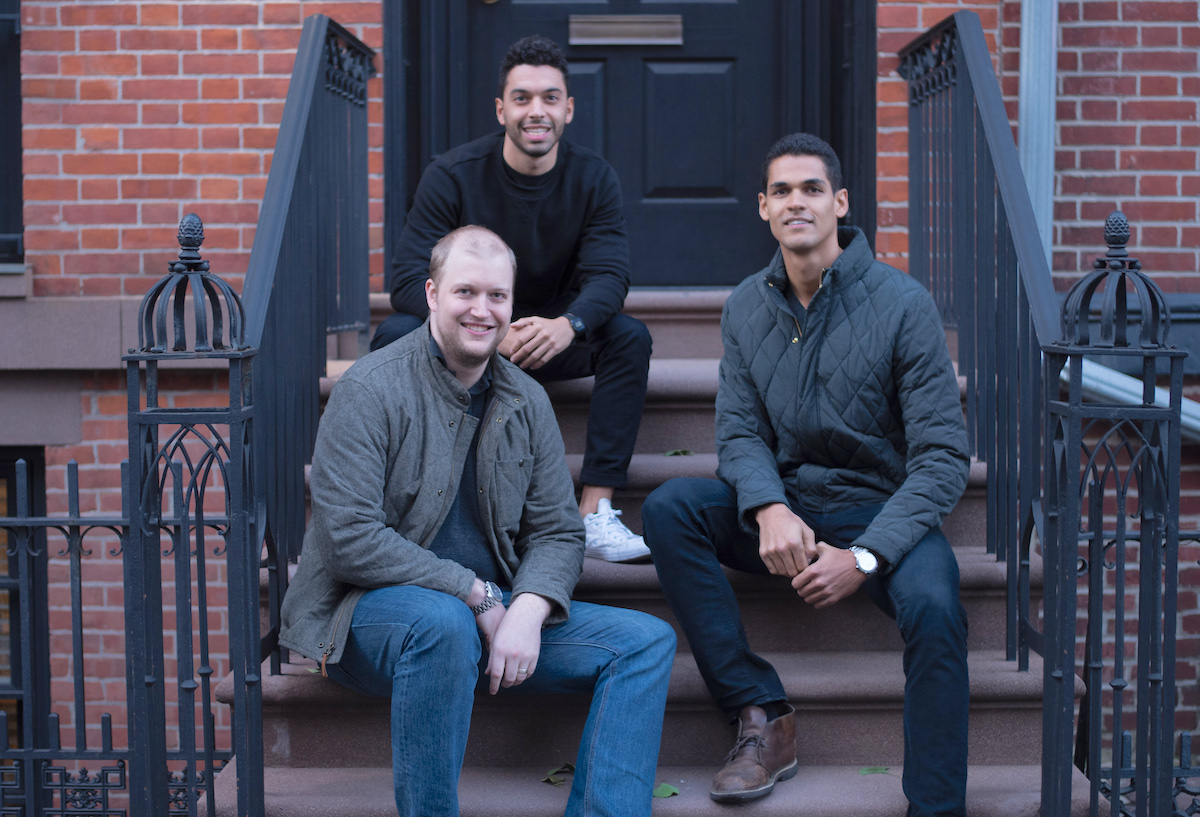 “We all came from the world of having worked at hedge funds and private equity firms like Goldman Sachs. We spent five years doing that and ultimately were very frustrated that the experiences and products we were building for wealthy people were completely inaccessible to people who weren’t rich or didn’t have a fancy suit,” Gardner recalls. “Instead of charging high fees, we can use software to bring the products directly to consumers.”

Titan wants to build BlackRock for a new generation, but its origin is much more traditional. Gardner and his co-founder Joe Percoco met on their first day of business school at UPenn’s Wharton (of course). Meanwhile, Titan’s third co-founder, Max Bernardy, was studying computer science at Stanford before earning a patent in hedge fund software and doing engineering at a few startups. The unfortunate fact is the world of finance is dominated by alumni from these schools. Titan will enjoy the classic privilege of industry connections as it tries to carve out a client base for a fresh product.

“We were frustrated that millennials only have two options for investing: buying and selling stocks themselves or investing in a market-weighted index,” says Gardner. “We’re building the third.” 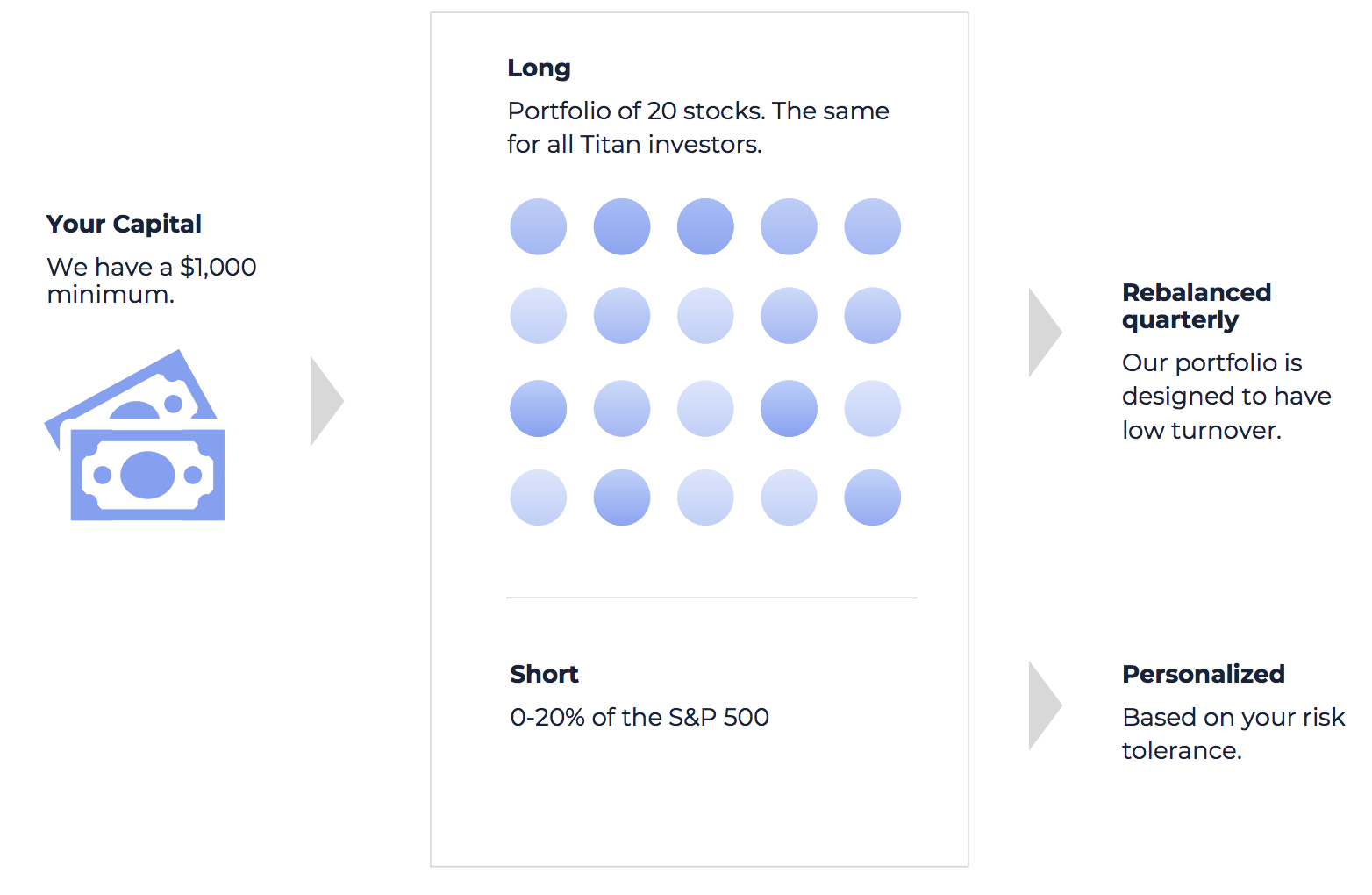 Titan’s first product isn’t technically a hedge fund, but it’s built like one. It piggybacks off the big hedgies that have to report their holdings. Titan uses its software to determine which are the top 20 stocks across these funds based on turnover, concentration and more. All users download the Titan iOS or Android app, fund their account and are automatically invested into fractional shares of the same 20 stocks.

Titan earns a 1 percent annual fee on what you invest. There is a minimum $1,000 investment, so some younger adults may be below the bar. “We’re targeting a more premium millennial for start. A lot of our early users are in the tech field and are already investing,” says Gardner.

For downside protection, Titan collects information about its users to assess their risk tolerance and hedge their investment by shorting the market index 0 to 20 percent so they’ll earn some if everything crashes. Rather than Titan controlling the assets itself, an industry favorite custodian called Apex keeps them secure. The app uses 256-bit encryption and SSL for data transfers, and funds are insured up to $500,000. 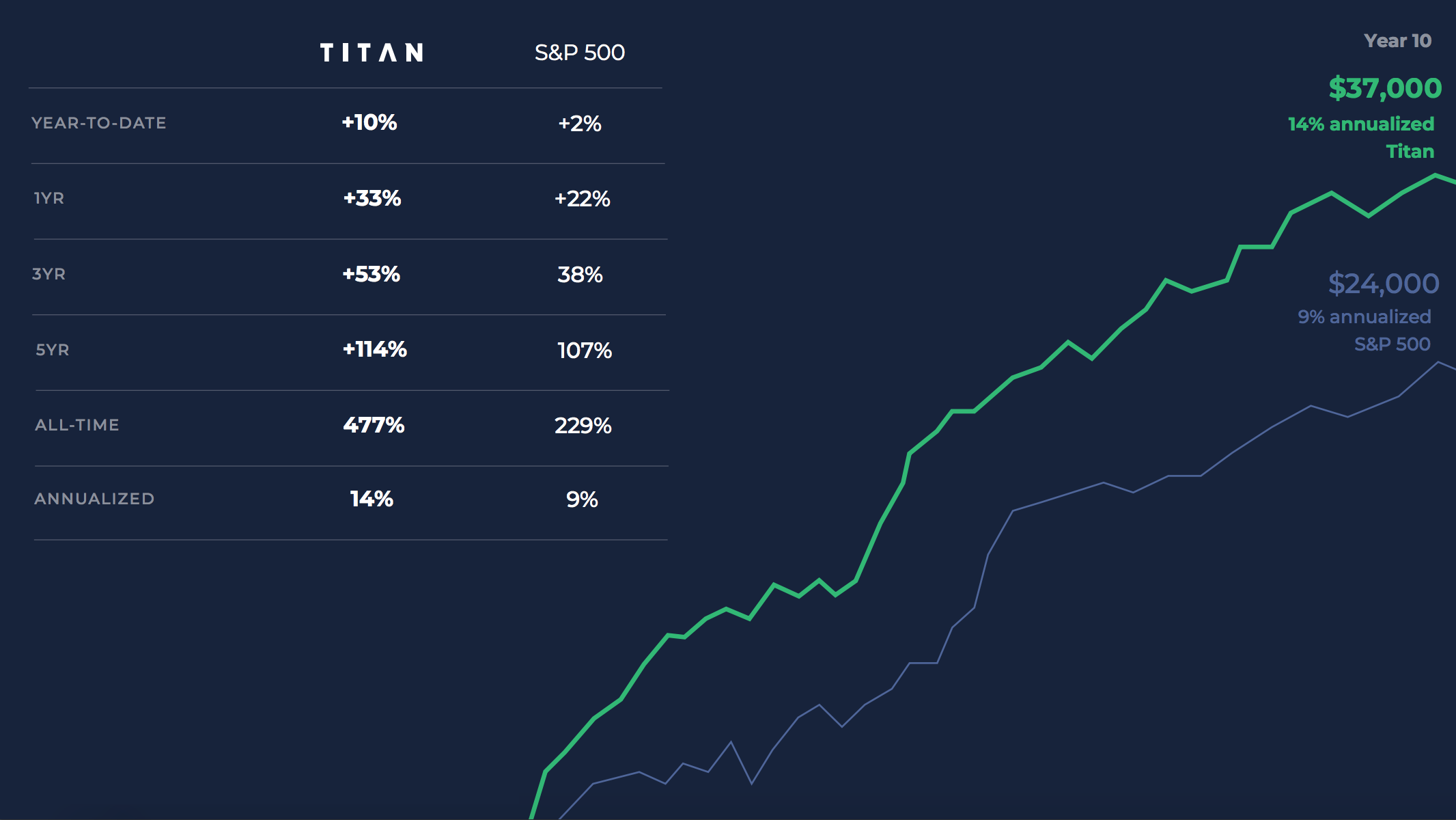 How have its bets and traction been doing? “We’ve been pleasantly surprised so far,” Gardner beams, noting Titan’s thousands of clients. It claims it’s up 10 percent year-to-date and up 33 percent in one year compared to the S&P 500’s 2 percent year-to-date and 22 percent in one year. Since users can pull out their funds in three to four business days, Titan is incentivized to properly manage the portfolio or clients will bail.

But beyond the demographic and business model, it’s the educational elements that set Titan apart. Users don’t have to hunt online for investment research. Titan compiles it into deep dives into top stocks like Amazon or Comcast, laying out investment theses for why you should want your money in “the everything store” or “a toll road for the Internet.” Through in-app videos, push notifications and reports, Titan tries to make its users smarter, not just richer.

With time and funding, “Eventually we hope to launch other financial products, including crypto, bonds, international equities, etc.,” Percoco tells me. That could put Titan on a collision course with Wealthfront, Coinbase and the recently crypto-equipped Robinhood, as well as direct competitors like asset managers BlackRock and JP Morgan. 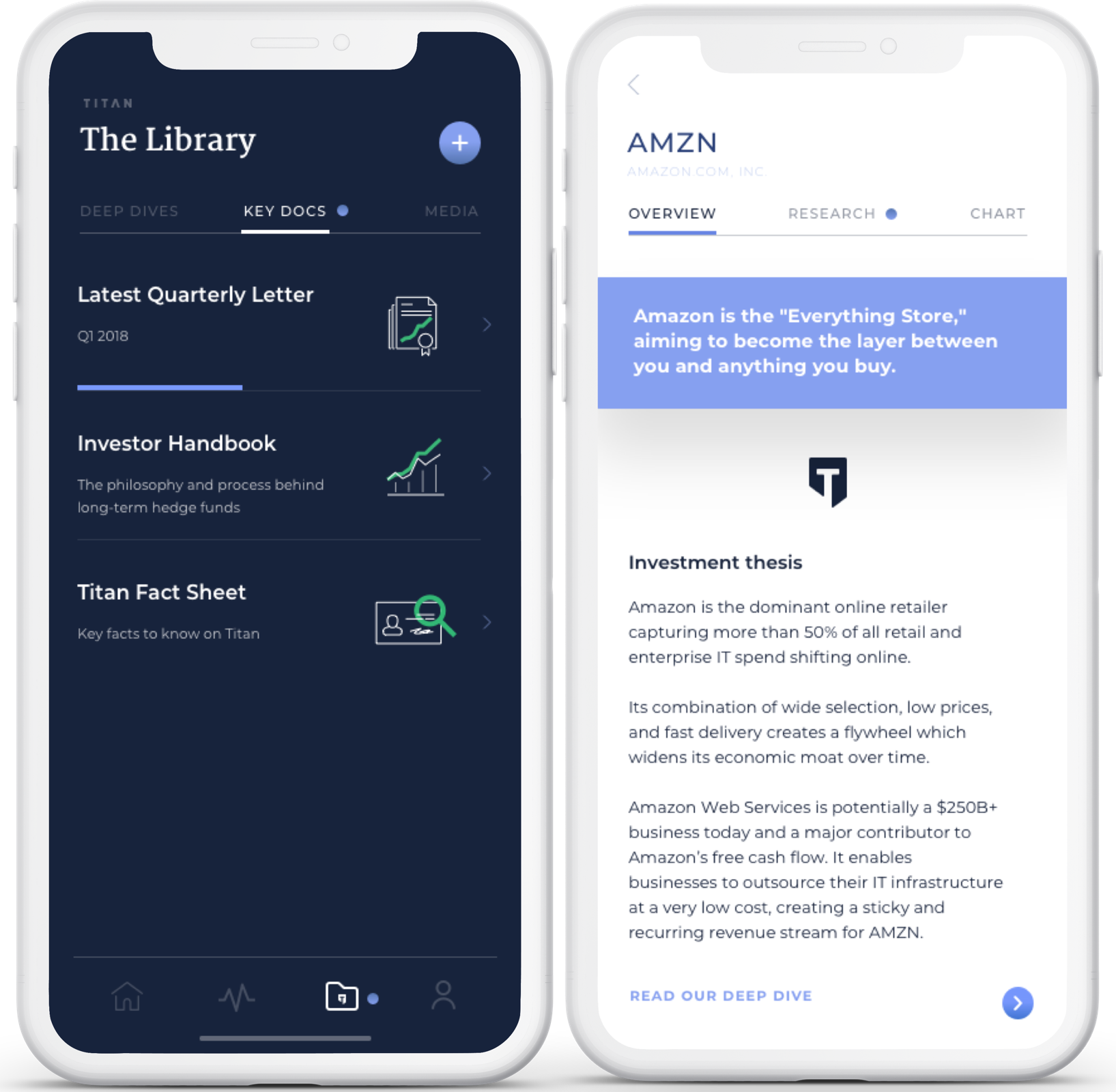 “If we fast-forward 10 to 20 years in the future, millennials will have inherited $10 trillion, and at this rate they’re not equipped to handle that money,” says Gardner. “Financial management isn’t something taught in school.”

Worryingly, when I ask what they see as the top threats to Titan, the co-founders exhibited some Ivy League hubris, with Gardner telling me, “Nothing that jumps out…” Back in reality, building software that reliably prints money is no easy feat. A security failure or big drop could crater the app’s brand. And if its education materials are too frothy, they could instill blind confidence in younger investors without the cash to sustain sizable losses. Competitors like Robinhood could try to swoop in an offer managed portfolios.

Hopefully if finance democratization tools like Titan and Robinhood succeed in helping the next generations gather wealth, a new crop of families will be able to afford the pricey tuitions that reared these startups’ teams. While automation might subsume labor’s wages and roll that capital up to corporate oligarchs, software like Titan could boost financial inclusion. To the already savvy, 1 percent might seem like a steep fee, but it buys the convenience to make the stock market more accessible.