The first program was launched in San Francisco in July 2017, and while the company has launched additional accelerator programs in Berlin and Tel Aviv (with plans for a Paris accelerator in the fall), it’s SAP’s San Francisco and New York programs that have a specific focus on women and founders of color, according to Vanessa Liu, a vice president in charge of the New York program.

“The first one launched last summer, with San Francisco that was in July. Berlin launched in the fall with Techstars as a partner, Tel Aviv launched with The Junction,” Liu said.

The partnerships with Techstars in Berlin and The Junction in Tel Aviv were designed solely to gain exposure to those markets, while the San Francisco and New York programs focused on diversity — as well as building out the SAP network among startups.

The Foundry accelerator programs are independent from the company’s $35 million Foundry fund, according to Liu. Companies that progress through the program give up no equity and receive no capital. Rather, the companies involved get access to the SAP network of partners and customers and the company’s various technical and support services, Liu said.

“This is more about how do you work together with SAP and customers like GE, Coca-Cola, and Stanley Black & Decker,” said Liu.

For the New York cohort that demoed their wares yesterday, eight of the nine companies that participated were also based in New York, with one group of founders making the trek up from Georgia for the program.

And while there’s been no instance yet where companies that graduate from the accelerator receive a capital commitment later from the Foundry fund, Liu did not rule out the possibility.

That Foundry fund typically will invest between a quarter of a million and one million dollars into companies focused on machine learning, big data and other enterprise software-related applications. Checks are typically $250,000 at the seed stage, increasing to $1 million as a company grows into a Series A investment.

In some ways, Liu said, the Foundry fund was a way for SAP to build on the work it had done with startups through its (now independent) Sapphire Ventures fund. That had been the vehicle SAP had previously used to connect with the startup world and early-stage tech companies and entrepreneurs.

“We’re definitely not the first to market,” said Liu. “But we’re looking at it not just only in making investments and thinking about how to do that but it’s also about cultivating investments and making sure that we do that right.”

For the Foundry accelerator programs in the U.S. doing it right means focusing on gender and racial diversity. The criteria for the program is that at least one C-suite executive and member of the founding team be female. And of the nine companies in the cohort, only two companies were admitted where women were not serving in the chief executive role, Liu said. 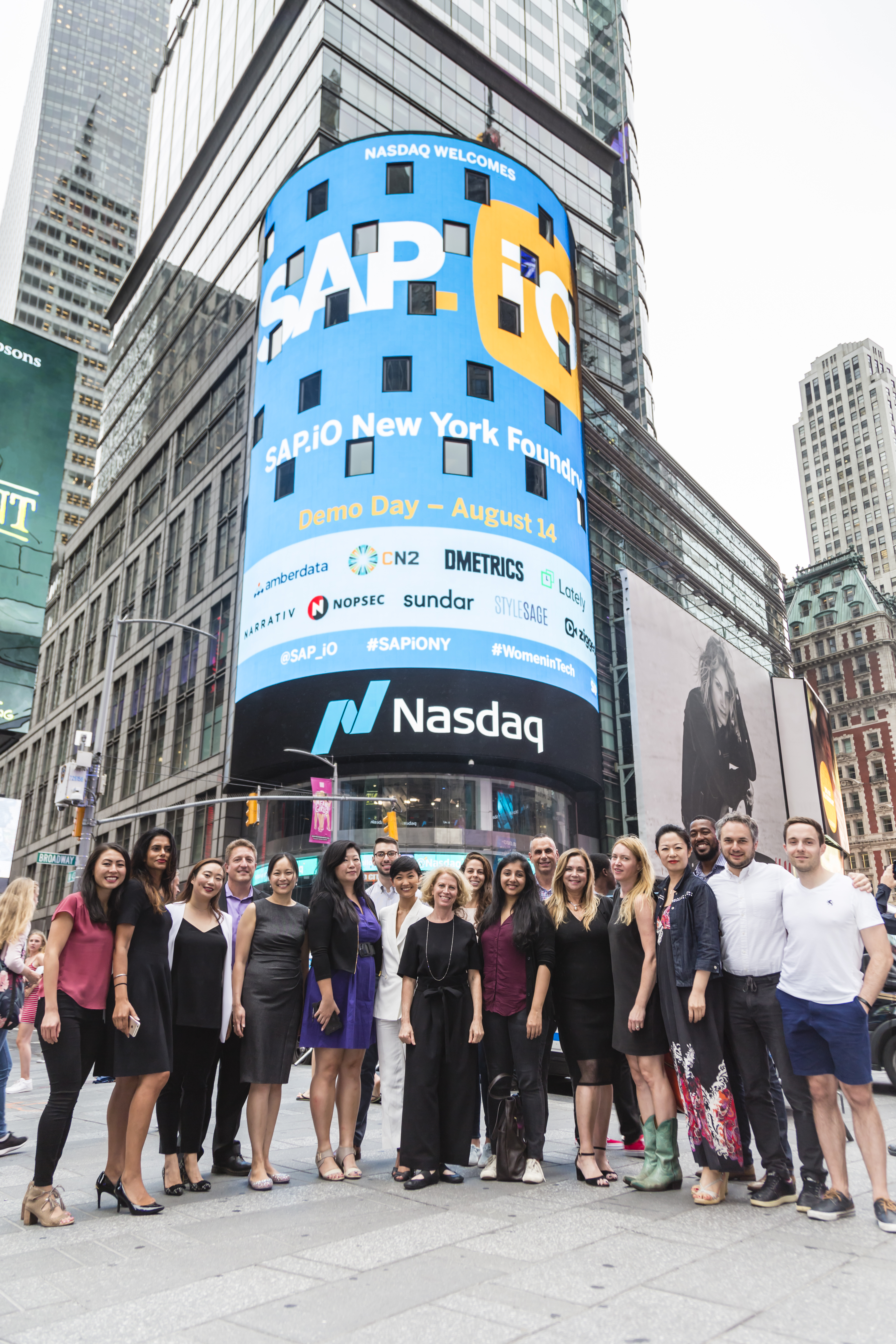 These are the executives and companies that went through the SAP.io Foundry Accelerator in New York:

Tongtong Gong, founder and COO of Amberdata, a provider of monitoring and analytics for blockchain infrastructure and smart contract applications.

Ariadna Quattoni and Paul Nemirovsky, founders of DMetrics, which enables non-developers to build machine learning algorithms to extract insights from any text, in mere hours, and with zero coding.

Lisa Xu, co-founder and CEO of Nopsec, a provider of threat prediction and cyber risk remediation solutions for enterprises to prevent security breaches.

Jade Huang, co-founder and CEO of StyleSage,  which enriches product listings with attributes and then maps those products to e-commerce sites.

Jag Gill, founder and CEO of Sundar, a software service connecting apparel brands and retailers with suppliers of textiles, raw materials and garments.