Last week, Santa Monica’s shared mobility device selection committee recommended the city move forward with Lyft and Uber-owned Jump as the two exclusive scooter operators in the city during the upcoming 16-month pilot program. The committee ranked Lyft and Jump highest due to their experience in the transportation space, staffing strategy, commitments to diversity and equity, fleet maintenance strategies and other elements. Similarly, the committee recommended both Lyft and Jump as bike-share providers in the city.

“The Lyft and Uber applications to operate e-scooter sharing programs in Santa Monica demonstrate the desperate lengths CO2 polluting companies will go to for the purpose of undermining clean energy competition,” a Bird spokesperson told TechCrunch. “We at Bird are dedicated to replacing car trips with clean energy trips and will continue to fight against car dependency alongside our loyal riders.”

Now, both Bird and Lime are asking their respective riders to speak out against the recommendations. Bird, which first launched in Santa Monica, has also emailed riders, asking them to tell the city council that they want to Bird to stay.

“In a closed-door meeting, a small city-appointed selection committee decided to recommend banning Bird from your city beginning in September,” Bird wrote in an email to customers. “This group inexplicably scored companies with no experience ever operating shared e-scooters higher than Bird who invented this model right here in Santa Monica.” 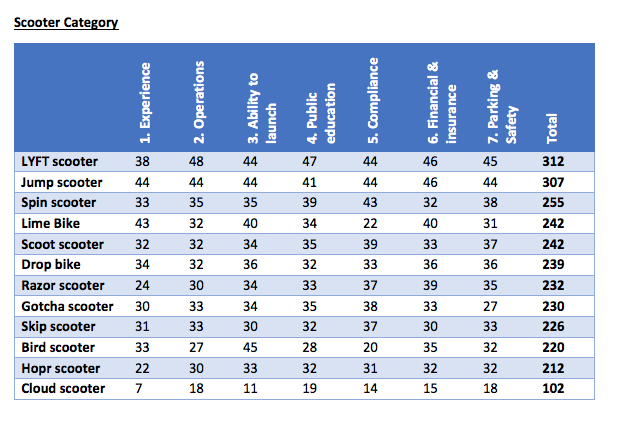 Lime says it’s worked collaboratively with the city to design a program tailored to the needs of the Santa Monica community since day one.

“It’s clear Santa Monica residents and visitors have enthusiastically embraced Lime, with over 180,000 unique riders choosing us as their affordable, zero-emission transportation option since we launched in April,” Lime CEO Toby Sun said in a statement to TechCrunch. “As the most experienced shared bike and scooter company in the United States, we are disappointed by the City’s current proposal because Santa Monica riders deserve access to best-in-class technology. We have on-the-ground experience operating shared scooters in Santa Monica and around the world, giving us the greatest readiness to fulfill the needs of residents without interruption when the pilot program begins.”

In addition to asking people to contact their city officials, Bird and Lime are hosting a rally later today at Santa Monica City hall. But given that most of these electric scooters are manufactured by the same provider and that the services are essentially the same, I’d be surprised if there’s much brand loyalty. Over in San Francisco, I personally miss having electric scooters, but I really don’t give a rat’s pajamas which services receive permits. That’s just to say, we’ll see if these efforts are effective.