The latest to partner with Flux is the U.K. food chain itsu, which sells Asian-inspired fast food. Under the deal — positioned as a trial for now — the food merchant will use Flux to power paperless receipts across all 72 of its U.K. stores. Customers paying with cards issued by Flux partner banks who have opted-in will receive digital itemised receipts directly into their banking apps when they shop at itsu.

Founded by former early employees at Revolut, the Flux platform bridges the gap between the itemised receipt data captured by a merchant’s point-of-sale (POS) system and what little information typically shows up on your bank statement or mobile banking app. Off the back of this, it can also power loyalty schemes and card-linked offers, as well as give merchants much deeper POS analytics via aggregated and anonymised data on consumer behaviour, such as which products are selling best in unique baskets.

On the banking side, it currently partners with challenger bank Starling, and has a closed trial with Monzo. After graduating from Barclay’s fintech accelerator, Flux also recently got added to Barclays via its Launchpad app, which is used by a subset of customers who want to get in on the bank’s latest innovations early.

On the merchant side, in addition to today’s announced itsu partnership, Flux works with EAT and pod in the U.K., and has an upcoming trial with Costa Coffee. 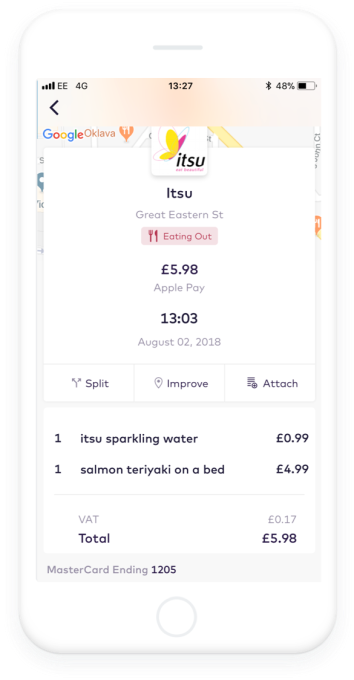 Asked how Flux is overcoming its chicken and egg problem, and how conversations with banks and merchants have changed over the last few months, Flux co-founder Veronique Barbosa says the startup faces the same challenge as any marketplace. However, she believes the company has built a solid foundation for what she dubs the “Flux Flywheel”, borrowing from Amazon’s Amazon Flywheel concept.

“For every bank we add on, we unlock the opportunity to provide Flux to those cardholders. With increasing access to cardholders, we can attract more retailers. With more retailers we can engage the banks, as their cardholders now have more places to use Flux. And so the cycle begins again,” explains Barbosa.

“We are now at the stage where in addition to our partnership with Starling Bank, for example, we’re integrated and live with one of the largest consumer banks in the U.K., Barclays, via their Launchpad app. On top of that we recently announced the largest coffee chain in the U.K. will trial Flux… We are having very different conversations now than we were even three months ago. The conversation has changed from why should I be interested in this to how could I tailor this for my business given the validation that inevitably comes with partnering with such familiar brands”.

However, despite the undoubted progress Flux has made, it is notable that a number of partnerships have launched as a trial only, suggesting both banks and merchants are being a little tentative in how they deploy the startup’s technology. Barbosa says that isn’t unusual, especially when deciding to invest in nascent technology from a relatively small startup.

“What we’re building is completely new as we’re liberating receipt level data at scale, and so it’s not unusual for our partners to want to test out the waters and describe our work together as a trial before entering a longer term commitment,” she says. “The main reason being, how do they know if their customers will love it? What’s exciting is we’ve now entered a phase where we’ve generated more than enough proof points to dispel that concern from the get go”.