Can a mobile app help to address the opioid crisis in the U.S.? That’s the goal behind FEND, an app that’s taking advantage of technology solutions like machine learning and gamification to increase young people’s understanding of opioids and to change their behaviors. It’s the first large-scale attempt at running a public health campaign in the U.S. on a mobile device in this manner. And it’s already seeing some early success thanks to its sponsorship of Vans’ Warped Tour and the endorsement of several participating bands and  artists.

Unlike traditional public health campaigns which use mass media, like billboards or TV ads to reach users, FEND [Full Energy No Drugs] personalizes its material for each user.

The FEND app encourages downloads by promising users – young people who otherwise wouldn’t bother with an educational anti-drug app – free swag they actually care about. For example: Vans Warped tour tickets, a trip to the Rock & Roll Hall of Fame, Vans shoes, access to acoustic sessions at the Warped Tour with bands like Waterparks and We the Kings; and in the future, if all goes well, a way to bring a concert produced by Warped Tour’s Kevin Lyman to their own hometown. 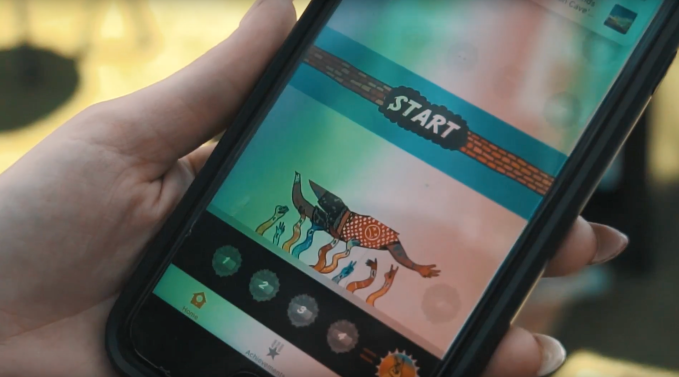 The idea for FEND comes from serial entrepreneur Steve Huff, a North Carolina native who has been living in Australia for the past eighteen years. During this time he has founded and headed a number of businesses, including automated publishing solution Typefi Systems; parenting information resource Sixty Second Parent; and sustainable energy non-profit, The Light Foundation, where he authored a report for the UN on the use of solar lighting in refugee camps, and ran a solar entrepreneurship program for teenage girls in Malawi.

“For me, it’s always important to combine innovation, entrepreneurship and some kind of social good,” Huff explained, as to his motivations around FEND.

The problem FEND aims to address is to make public health campaigns more effective by individualizing the conversation for each user, while also using the same sort of technology social apps leverage to addict their users.

The technology platform itself, iPug, uses gamification, rewards artificial intelligence, and personalization techniques to make the information shared in the app relevant to the end users, and retain them over time. It combines the evidence-based research it aims to share with technology, its own streetwear brand and – as the means of reaching the target audience – music.

While there are obviously a number of ways this platform could be used in public health education, the company is focused initially on an opioid educational campaign launched in partnership with the Preventum Initiative. 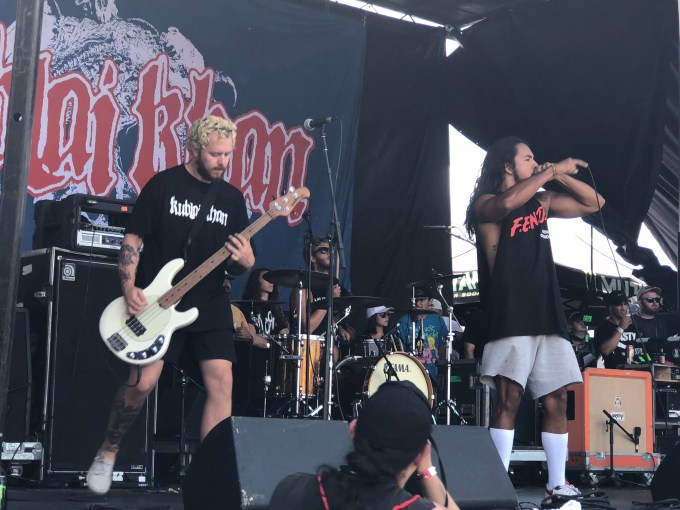 A large part of FEND’s following comes from its sponsorship of the final run of the Vans Warped Tour, where it has a booth and the support of many artists who mention FEND on stage, send out messages to fans, wear FEND merchandise, or even perform special sets for FEND.

For example, Waterparks, The Maine, We The Kings, The Interrupters, and others have spoken for FEND.

After the first 9,500 downloads, the company took a snapshot of user behavior and found its engagement rate was 80 percent. And 79 percent of the kids said they would be “very likely” to talk to a loved one or friend who might be using.

In the app, users are first presented with a baseline survey to get an understanding of how much they already know about opioids. Then across four modules, they learn more about the topic through videos, infographics, quizzes, motion graphics, and more, which combined address key topics like how to spot the signs of an opioid overdose, or how to talked to a loved one about their addiction, and other information about the drugs.

As users progress, the plan is to customize the app’s material to each person’s learning style – using the right material and approach, by taking advantage of machine learning to personalize the experience. Even if FEND falls short of being a success as measured by traditional app store metrics, it’s a whopper for public health campaign. And its results can be life-saving.

“We’re getting a lot of feedback from the kids, who said ‘I just downloaded this app to get free stuff. But I went to a party last week, and there was a kid in the corner. I went over and their lips were blue and their fingers were blue, and I checked their breathing. I knew they were overdosing, and I called 911. I put them in the recovery position, and the paramedics came, gave them Narcan and said I saved their life,'” Huff told us over the weekend, in a backstage interview at Warped Tour.

“[Some researchers are]* freaking out because they’re going to have the largest sample size for an opioid study in history,” Huff enthused.

(A prior study of opioid deaths included over 13,000 overdose cases. But many studies range in the hundreds, in terms of participants.)

The company now wants to bring FEND to schools, through deals with state governments.

“We’ve been talking to state governments,” Huff said, noting the feedback has been positive, but talks are in early phases – no deals have been signed. “Alabama was like, look, we have morgues where we’re putting bodies out under the trees because we don’t have enough space,” he continued. “This is way bigger than anybody knows.”

“2016 was the last time the CDC reported statistics on the opioid epidemic. And at that point, we were losing 60,000 people a year to overdoses due to the use of opioids and heroin. And 80 percent of heroin users in the U.S. got their start on prescription pills,” Huff added. [He’s citing these numbers from the CDC.]

The goal is to bring FEND to states for a pilot in five states for a period of 14 months, to further prove out the concept outside the progress made with the Warped Tour sponsorship.

The tech platform behind FEND, founded in late 2015, has raised $2 million in angel funding from Huff’s network of connections. The long-term goal is to offer the platform on a SaaS [software as a service] basis or through enterprise sales. It has also researched and aims to implement its own token economy on the Ethereum blockchain. This would allow other non-profits, celebs and movements the opportunity to run their own public health campaigns using the platform. These could be offered in their own white-labeled version of FEND app, focused on their own supported initiative.

For the bands involved, it could also allow those with smaller followings a way to be reimbursed in tokens for bringing their followers to FEND.

The bigger picture here is about taking advantage techniques common to tech companies drug companies, and others, and leverage them for public health campaigns instead, Huff also noted.

FEND is available on iOS and Android.

* The well-known research university requested its name to be removed from this article, until the research is completed. It’s probably the one you’re thinking, though.