Facebook has hit a wall. The social network succumbed to its uncoolness and public backlash over its handling of fake news, privacy and digital well-being to miss some of Wall Street’s estimates, showing mixed results in its Q2 2018 earnings. GDPR, Mark Zuckerberg’s testimony before Congress and more scandals appear to have contributed to Facebook’s weak user growth.

Facebook reached 2.23 billion monthly users, up just 1.54 percent, much slower than Q1’s 3.14 percent (where its growth rate has hovered for years). Facebook earned $13.23 billion in revenue, missing Thomson Reuters consensus estimates of $13.36 billion, but beat with $1.74 EPS compared to an estimated $1.72 EPS. 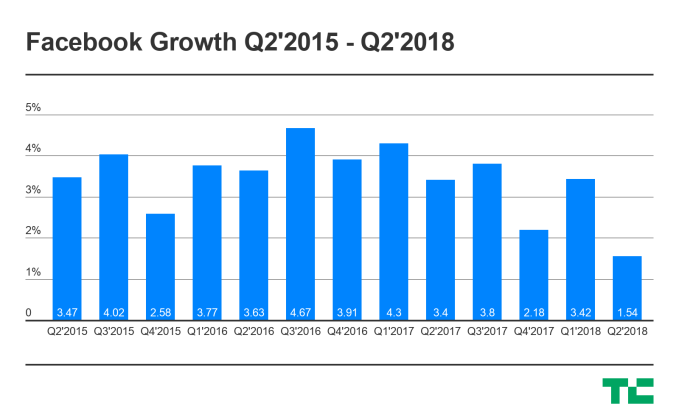 Daily active users hit 1.47 billion, up an especially low 1.44 percent percent compared to Q1’s 3.42 percent. For comparison, before now Facebook’s slowest quarter-over-quarter, daily user growth rate was 2.18 percent in Q4 2017. In an attempt to deflect attention from its weak user growth, Zuckerberg announced on the earnings call that 2.5 billion people use at least one of its apps: Facebook, Instagram, WhatsApp or Messenger.

2.5 billion people use at least one of Facebook’s apps

The stock market frowned on the slow growth rates, pushing Facebook’s share price down more than 21 percent in after-hours trading to around $170 per share. That’s down from $217.50 when the markets closed. Initially the share price dropped 7 percent on news of slow user growth, but then fell much further when Facebook announced revenue growth would slow significantly in upcoming quarters.

The share price descent comes despite Facebook earning $5.106 billion in profit and revenue being up 42 percent year-over-year. Zuckerberg noted in the earnings release that “Our community and business continue to grow quickly.” And while that’s true if you’re looking year-over-year, Q2 could break that trend. 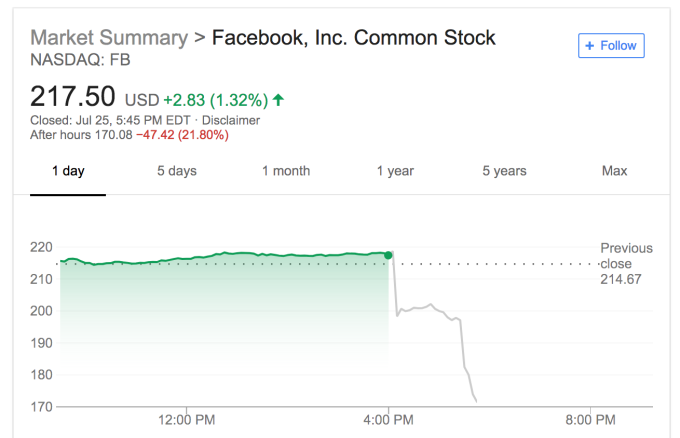 Facebook’s daily and monthly user counts were up 11 percent year-over-year, confirming that the momentum of its business is still overpowering its PR problems when you zoom out. And its DAU to MAU ratio held firm at 66 percent, indicating that users are still visiting the site often. But the question for today’s earnings call will be whether time spent on the site has decreased significantly, dragging down revenue with it. 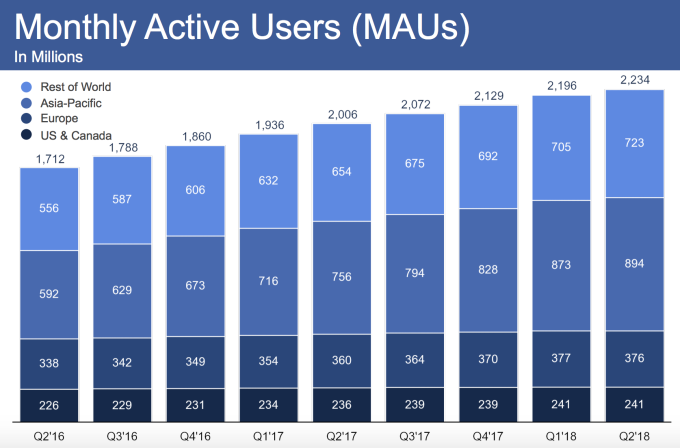 One tough spot for Facebook was that it got stuck at 241 million monthly U.S. and Canada users, the same count as last quarter. After failing to grow in that core market in Q4 2017, it appears that Facebook finally has hit saturation at home after 14 years. And in Europe, Facebook lost 1 million users, sinking to 376 million monthlies. That could be a sign that GDPR requirements and the annoying terms of service changes it had to get users to agree to deterred some from browsing. In fact, CFO David Wehner said the failure to grow in Europe was “due to the GDPR.”

Facebook still managed to boost its average revenue per user in all markets, growing from $23.59 to $25.91 in the U.S. and Canada, showing its targeting continues to improve and competition for ads is strong. But the fact that it’s stopped growing at home could weigh heavily on its share price. Facebook will have to continue to invent more ways to squeeze dollars out of its existing users.

The earnings call saw a worrying warning from Wehner, who said that after 42 percent year-over-year revenue growth this quarter, Facebook expected high single-digit drops each quarter to that metric over the next few quarters. “In terms of what’s driving the deceleration, it’s a combination of factors. First of all there’s currency that’s going from a tailwind to a modest headwind. Secondly, we’re going to be focusing on growing new experiences like Stories . . . and that’s going to have a negative impact on revenue growth. And we’re giving people who use the service more choice in terms of privacy.”

Looking back, the quarter saw Facebook clamp down on APIs for developers in hopes of preventing another Cambridge Analytica-style disaster. Its CEO faced tough days of questioning from Congress over the privacy problem, alleged bias against conservatives and its failure to protect the 2016 presidential election. Facebook has faced tough questioning from reporters about its approach to fake news and election interference. Facebook tried to redirect attention away from its troubles during its F8 conference that saw it announce plans for a dating feature.

But all the problems may be taking a toll on user engagement, leading to the revenue miss. Weak daily and monthly user growth should be a big concern, and will put even more pressure on Instagram to prop up the corporation.

This article has been updated to reflect announcements from the earnings call.