WeChat is used by hundreds of millions of Chinese people daily for services that stretch beyond chat to include mobile payments, bill paying, food delivery and more. Tencent, the company that operates WeChat, added mini programs last year and they effectively operate like apps that are attached to the service. That means that users bypass Google Play or Apple’s App Store and install them from WeChat.

Earlier this year, Tencent added support for games — “mini games” — and the Chinese firm recently said that more than one million mini programs have been created to date. Engagement is high, with some 500 million WeChat users interacting with at least one each month.

WeChat has become the key distribution channel in China and that’s why Google is embracing it with its first mini program — 猜画小歌, a game that roughly translates to “Guess My Sketch.” There’s no English announcement, but the details can be found in this post on Google’s Chinese blog, which includes the QR code to scan to get the game.

The app is a take on games like Zynga’s Draw Something, which puts players into teams to guess what the other is drawing. Google, however, is adding a twist. Each player teams up with an AI and then battles against their friends and their AIs. You can find an English version of the game online here. 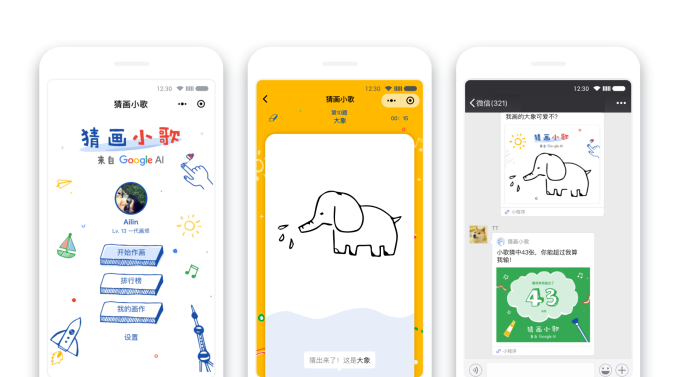 The main news here isn’t the game, of course, but that Google is embracing mini programs, which have been christened as a threat to the Google Play Store itself.

“When in China… play by local rules.” Google has taken that to heart this year.

The company recently introduced a Chinese version of its Files Go Android device management app, which saw it join forces with four third-party app stores in China in order to gain distribution. This sketching game has lower ambitions but, clearly, it’ll be a learning experience for Google that might prompt it to introduce more significant apps or services via WeChat in the future.

Indeed, Google has been cozying up to Tencent lately after inking a patent deal with the Chinese internet giant, investing in its close ally JD.com and combining on investment deals together, including biotech startup XtalPi.

That’s one side of a new initiative to be more involved in China, where it has been absent since 2010 after redirecting its Chinese search service to Hong Kong in the face of government pressure. In other moves, it has opened an AI lab in Beijing and a more modest office in Shenzhen, while it is bringing its startup demo day event to China for the first time with a Shanghai event in September.

Finally, in a touch of irony, Google’s embrace of WeChat’s “app store-killing” mini programs platform comes just hours before the EU is expected to levy a multibillion-euro penalty on it for abusing its dominant position on mobile via Android.

Google is quietly formulating a new strategy for China