Bitcoin itself crossed the $7,000 mark for the first time in the last month, an indication — but no sure sign — that it might be shaking off a summer slump that’s seen prices plunge below $6,000 on more than one occasion. Bitcoin is quickly moving back toward early June norms around $7,500, though may meet resistance at $7,750. In March, Bitcoin dipped below the $10,000 mark and it’s been unable to mount a rally back above that level in the months since. 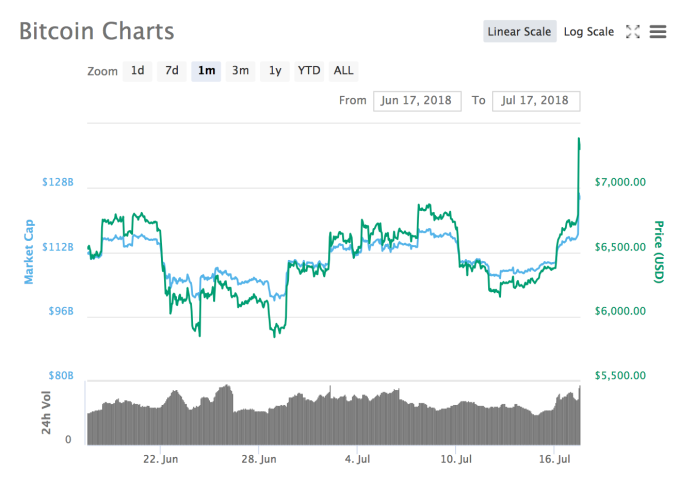 They may not last, but mid-July’s gains aren’t just a Bitcoin story. Out of the top 100 coins, 24 coins made double-digit gains in the last 24 hours, including 0x and Zcash, two coins recently tapped by Coinbase as potential assets that the platform is “exploring.” Big Bitcoin jumps normally lead the charge for altcoin growth, though seeing its peers so uniformly follow suit isn’t something you see every time the most prominent coin’s price shoots up.

So why is the price up? Potentially all or none of these reasons:

As with any price shift, headlines in one part of the world are just a single rumble among the many invisible international seismic signals sending coins up or down on a given day. As one reads the tea leaves, it’s worth remembering that correlation ≠ causation when it comes to big price moves. Still, that doesn’t mean you can’t enjoy the tea.

Why is Bitcoin’s price down to two-month lows?

Disclosure: The author holds a very small position in some cryptocurrencies, mostly because it seemed like a fun idea back in 2013 and then she forgot about it. Regrettably, it is not enough for a Lambo.