Skype’s redesign launched last year was met with mixed reviews, but the company is forging ahead by rolling out a number of its new features to other platforms, including the desktop. Microsoft today is launching Skype version 8.0 that will replace version 7.0 (aka Skype classic), the latter which will no longer function after September 1, 2018. The new release introduces a variety of features, including HD video and screen-sharing in calls, support for @mentions in chats, a chat media gallery, file and media sharing up to 300 MB, and more. It will also add several more features this summer, including most notably, supported for encrypted audio calls, texts, and file sharing as well as built-in call recording.

The 8.0 release follows on the update to Skype desktop that rolled out last fall, largely focusing on upgrading the visual elements of new design, like the color-coding in chat messages and “reaction” emojis. This release also included the chat media gallery and file sharing support, which are touted as new today, but may have already hit your desktop.

Although Skype still has some 300 million monthly users, it no longer appears to be growing. While once a must-have app for communication, Skype has faced increased competition over the years from the likes of Apple’s FaceTime, and other apps for texting and calls, like Messenger and WhatsApp, among others, plus new communication apps for business, like Slack. To better compete, Microsoft gave Skype a facelift starting last year, which introduced a number of social features seemingly aimed at a younger user base, including its own take on Stories. 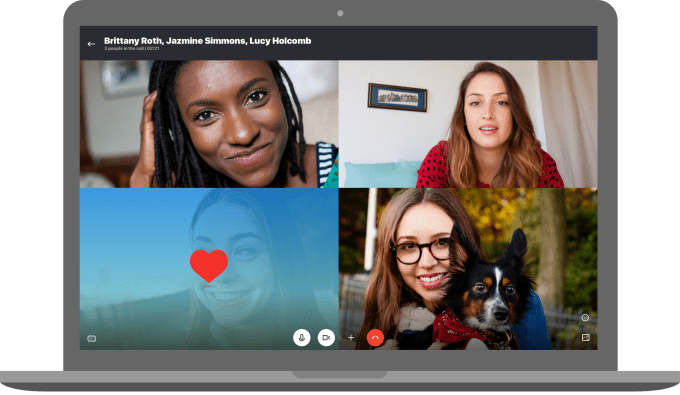 Today’s desktop release focuses again on consumer-friendly features, with the added support of HD (1080px video) video calls which can include up to 24 people, as well as the Twitter-inspired @mentions.

Later this summer, Microsoft says Skype will add support for profile invites (to invite friends to join you on Skype), read receipts for messages, group links for chats and calls, and other features.

The most significant of the forthcoming additions includes an end-to-end encrypted experience where Skype audio calls, text messages, and shared files like images, audio and video, and secured with the industry standard Signal Protocol. Messages and notifications in these conversations will also be hidden in the chat list to keep the communication private.

And, at long last, Skype is adding built-in call recording. Many Skype users today use third-party add-ons in order to record calls – something that should have prompted Skype to react years ago by making this a native option. The calls will be recorded in the cloud and everyone in the call will be notified the call is being recorded, for privacy’s sake and for legal reasons. The recorded calls will additionally include everyone’s video and screen shares, Microsoft notes.

Skype version 7.0 will continue to work until the cut off date, Microsoft says. (If you’re not sure which version you’re on, here’s how to check on Windows, Mac and Linux desktops.) Afterwards, you’ll need to update to version 8.0 if you want to keep using Skype.