Netflix is testing a new way to promote its original shows – right on the login screen. A company spokesperson confirmed the streaming service is currently experimenting with a different login screen experience which replaces the black background behind users’ names and profile thumbnails with full-screen photos promoting a Netflix Original series or special, like “BoJack Horseman,” “Orange is the New Black,” “Dark,” “My Next Guest…”, “13 Reasons Why,” and several others.

We first noticed the change on a TV connected to a Roku media player and on a Fire TV, but Netflix says the test is running “for TV,” which means those on other TV platforms may see the promoted shows as well. (Our Roku TV, however, had the same black background on the login screen, we should note.)

Every time you return to the Netflix login screen, it will have refreshed the photo that’s displayed. After cycling in and out of the Netflix app several times on our TV, we found the image selection to be fairly random – sometimes the promoted show would repeat a couple of times before a new show hopped in to take its place. 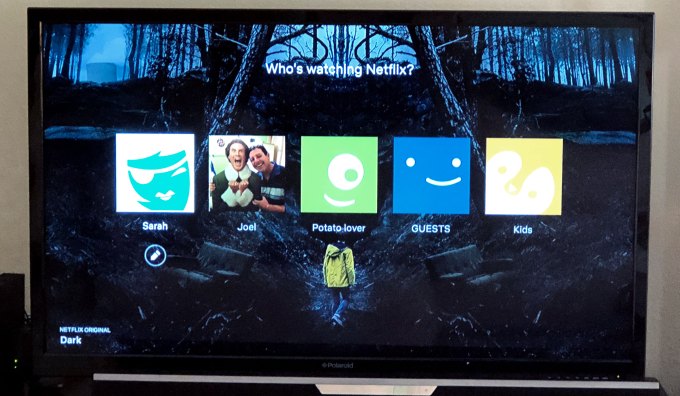 Netflix will likely decide whether or not to move forward with the change to the login screen based on how well this new promotional effort works to actually increases viewership of its originals.

While it makes sense to better utilize this space, I’m not sold on having ads for adult-oriented shows appearing on the same login screen that’s used by a child. The ads themselves (so far) have not been inappropriate, but it doesn’t seem like a good fit for multi-person households and families. For example, I now have to explain to a school-ager why they can’t watch that funny-looking cartoon, “BoJack Horseman.” Meanwhile, when I was logging in to watch more grown-up fare, I saw an ad for the new “Trolls” kids’ show. Uh, okay.

That said, this is still a much less intrusive way to advertise Netflix shows, compared with putting promos at the beginning of a show, like HBO does.

Netflix continually experiments with different ways to showcase its original programming, some of which eventually roll out to the wider user base – like the screensavers that launched last year, or the newer Stories-inspired mobile previews which arrived this spring.

The company is expected to spend up to $13 billion on original programing this year, so it makes sense that it wants to highlight top shows to users in the hopes of getting them hooked on content that they can’t get elsewhere. Retaining users is especially important given all the changes to the increasingly competitive streaming media space as of late, including the rise of live TV services, the AT&T-Time Warner merger, and Disney’s forthcoming Netflix competitor. Netflix is smart to double-down on its best asset: Originals.

The new test of promos on the login screen is only showing to a small percentage of users, Netflix says. That means you may not see them yourself, even if logging in to Netflix on a TV.

Image credits: Me. Photos are from my own Netflix account. My daughter likes to rename her account silly things, in case you’re wondering. Side note: I miss having real profile images instead of these stupid drawings. Why can’t we pick from characters on Netflix shows? That would be a fun way to promote the original series. After all, BuzzFeed has long since proven that people do like relating themselves to fictional characters, thanks to those “which character are you?” quizzes.