Elon Musk seems not only intent on burning all the goodwill he earned for trying to help last week’s Thai cave rescue, but rolling around in its ashes, too. In a series of extraordinarily offensive, now deleted tweets, the SpaceX and Tesla CEO called a British diver who participated in last week’s dangerous rescue mission a “pedo guy,” adding in another tweet “bet ya a signed dollar it’s true.” (Update: Vern Unsworth, the diver, said to reporters at the cave site that he is considering legal action against Musk. James Anderson, a partner at investment firm Baillie Gifford, one of Tesla’s biggest shareholders, also told the Guardian “I intend to convey my–predictable I trust–feelings to the company tomorrow.”) 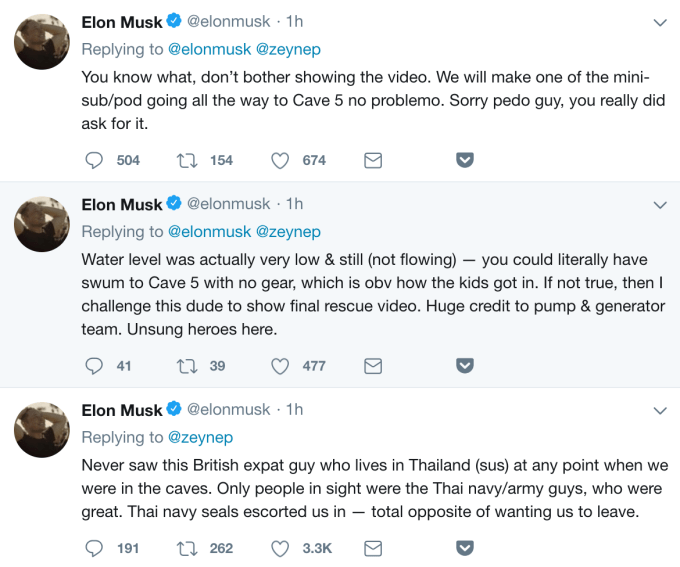 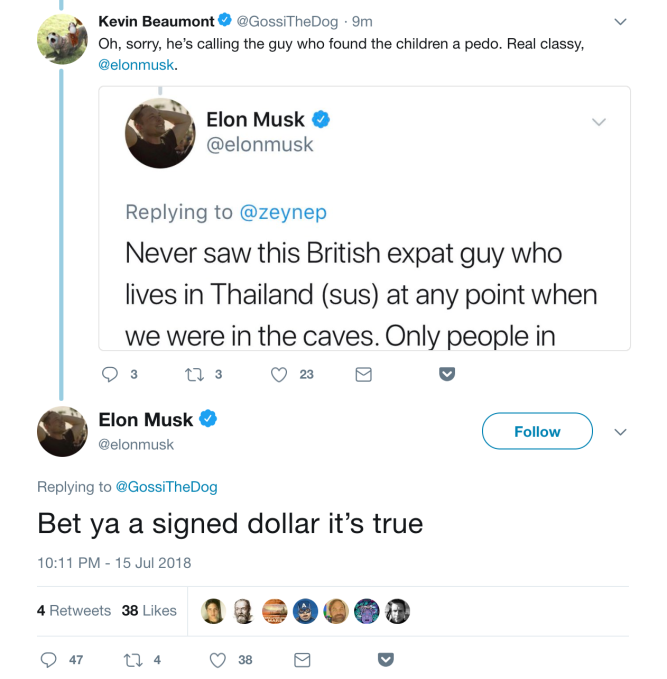 Musk’s tantrum was triggered by an interview Unsworth gave CNN International last Friday, in which he called the small submarine Musk had SpaceX engineers build a “PR stunt” and said Musk could stick it “where it hurts.” Though the submarine was intended to help the 12 boys stranded with their soccer coach navigate flooded cave passageways, Unsworth, who helped plan the rescue operation and recruited other cave diving experts, said it “had absolutely no chance of working.”

Unworth added that Musk “had no conception of what the cave passage was like. The submarine, I believe, was about 5 foot 6 long, rigid, so it wouldn’t have gone round corners or round any obstacles. It wouldn’t hadn’t have made the first 50 meters into the cave from the dive start point.” When the reporter mentioned that Musk had gone into the cave on Tuesday, Unsworth said he was “asked to leave very quickly. And so he should have been.”

The rescue mission, made even more challenging by monsoon season, claimed the life of a Thai Navy SEAL before all boys were saved last week.

This is not the first time that Musk has clashed with a member of the cave rescue team. As confirmation came in that the last group of boys and their coach had been freed on July 10, the head of the rescue mission, Narongsak Osatanakorn, told reporters that “although [Musk’s] technology is good and sophisticated it’s not practical for this mission.”

In response, Musk dismissed the credentials of Osatanakorn, who led the joint command center coordinating the operation and is former acting governor of Chiang Rai, the province where the cave is located. In a tweet he said Osatanakorn was “described inaccurately as ‘rescue chief’ ” and “is not the subject matter expert” (the Columbus Dispatch reports that Osatanakorn holds a Master’s degree from Ohio State University, where he studied geodetic engineering and surveying).

Though Musk’s tweet about Osatanakorn was sharply criticized, many still gave him credit for his efforts. After all, engineering a submarine in a few days to save a group of children is an impressive and laudable feat. While Musk is known for going on strange Twitter rants, however, his attack on Unsworth is in an entirely different stratosphere. In addition to defaming Unsworth in a particularly heinous way, the implication that a British diver would only go to Thailand, one of the world’s top diving destinations, for child sex tourism is problematic and arguably racist, as many have pointed out.

Elon Musk implying that British expats who live in Thailand are all kiddie fiddlers?
Erm… wow… isn’t that kind of a little bit racist?

Sure, Elon Musk calling a diver who help rescue 12 boys a ‘pedo’ just because he lives in Thailand is insulting, inflammatory and borderline libelous, but let’s not forget that it is also horrifically racist.

He didn’t just call the British rescuer in Thailand a pedophile. He called him a pedophile because he couldn’t imagine another reason for a white guy to be in Thailand. Which is a false assumption. Sometimes white guys visit Thailand to show off their useless submarines.

TechCrunch has contacted SpaceX for comment on Musk’s remarks. When asked if his tweets violate Twitter’s terms of service against defamatory content and harassment, a spokesperson sent this statement to TechCrunch: “Tweets and accounts are reviewed against the Twitter Rules and if a violation is found, action is taken.”