Homage, a Singapore-based startup that helps connect caregivers and organizations with care recipients and their families, has raised $4.15 million as it begins to eye overseas expansion.

The company was started in 2016 by Gillian Tee, a Singaporean who spent time working in the U.S., healthcare industry exec Lily Phang and former banker Tong Duong. Tee’s previous stints include founding Rocketrip, a travel startup backed by Y Combinator that has raised nearly $30 million, but she moved home after 15 years to be closer to her family.

The goal of Homage is to make it easier for caregivers and patients to connect, whilst also keeping their families updated.

“We’re realizing how much of a need there is for personalized one-on-one care,” Tee told TechCrunch in an interview. “A lot of what we do is actually non-medical, and it’s even more clear that we need to help people be mobile, be functional and have the choice to live with dignity as they age.” 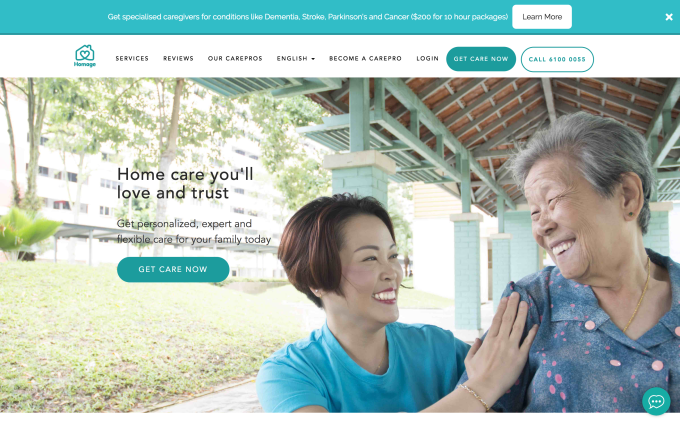 Tee, the Homage CEO, said the company is ramping up as it sees increased demand for its services.

Homage began focused on caregiving for the aging population, but it has since expanded to cover areas such as physiology, speech and occupational therapy — areas for post-stroke discharge. It also offers six different apps, which include two for caregivers, two for family members and two for partners, such as NGOs and other care agencies.

Tee said the plan is to use this new capital to push into other verticals and offer new services where there is demand from patients and caregivers, but Homage is also looking overseas for potential expansion for the first time.

“The focus is on Singapore but we’re looking at one other market in APAC,” she said. “We’re not quite decided on which one that’ll be [but] we see that across Asia this is something that’s very much needed.”

Along the way, Homage has also received praise from a very high level in Singapore: none other than Prime Minister Lee Hsien Loong.

On National Day Rally, August 20, 2017, the PM praised Homage for tapping the rise of on-demand apps like Uber and said he hopes that “more companies and government agencies will learn from Homage in using IT to improve lives.”