On Tuesday, news broke that Sequoia Capital has closed $6 billion out of what could end up being an $8 billion growth-stage fund with global scope. Crunchbase News covered that particular financing, but also found that Sequoia Capital is potentially raising billions more across funds focused on China, the U.S. and India, according to press reports and regulatory filings we examined.

Apart from the sheer size of its third “Global Growth” investment vehicle, there isn’t anything surprising about an old stalwart like Sequoia raising a big-dollar fund. But the fact that it’s unsurprising points to an important trend in venture capital fundraising. And it’s that trend we’ll explore today.

Here’s what we found: Older firms raise bigger funds, and appear to account for a majority of capital raised by U.S. venture firms.

According to the NVCA’s 2018 yearbook (PDF), first-time VC fund managers raised $3.4 billion across 36 new funds in 2017, record dollar volume since at least 2004. Also from the yearbook: 2017 set a record for the number of active VC investors, which hit all-time highs. (This being said, the number of “first round” investors has declined precipitously from prior maxima.)

The chart below shows what the explosion of new firms (and their funds) looks like over time, this time using funds data from Crunchbase. (And to learn a bit more about which numbers we’re using, check out the end of this article.) 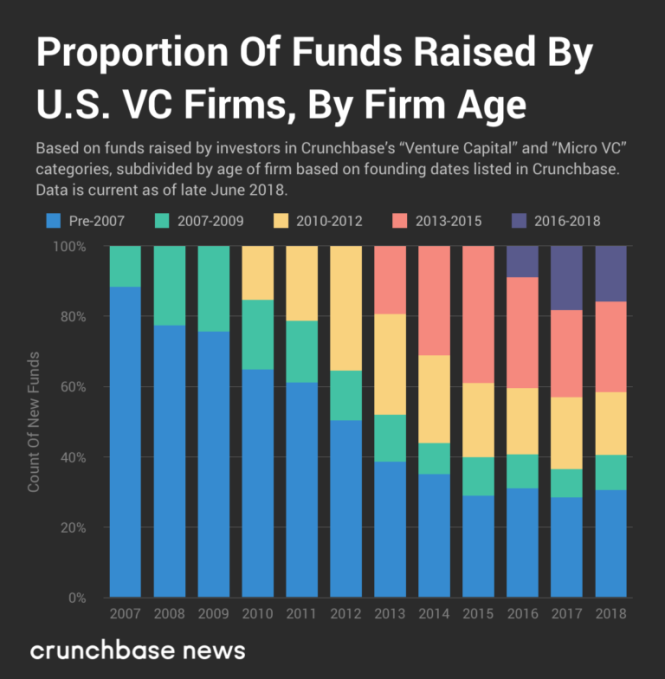 From 2014 through the first half of 2018, the number of funds raised by venture firms founded before 2007 averaged about 30 percent of new funds raised during that time.

This being said, as the chart below shows, older, “establishment” firms have raised the majority of LP dollars over the past decade. 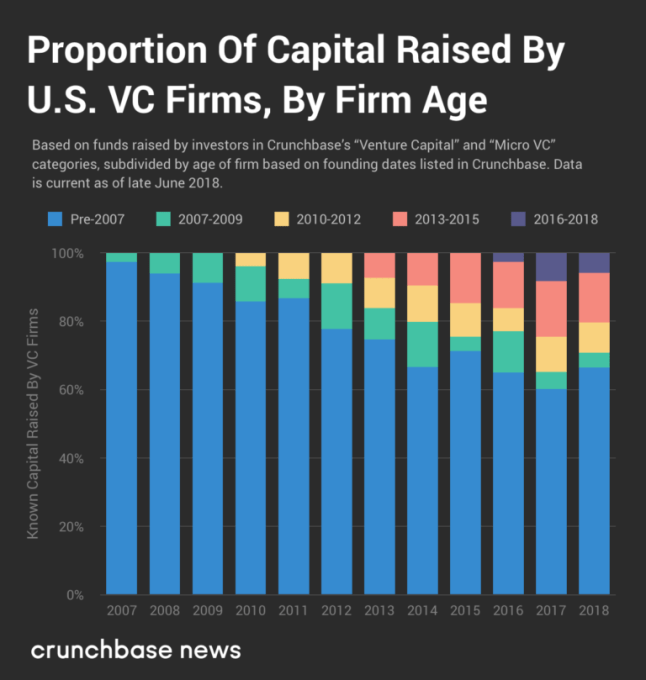 Although it isn’t pictured in the chart above, here are some other statistics to take away. Of all the money raised by firms in our data set between 2007 and the first half of 2018, 50 percent of that was raised by firms founded in 1999 or earlier.

A full third of the total capital was raised by firms founded before 1990. Many of the oldest firms — like New Enterprise Associates (founded in 1977), Accel (founded in 1983), IVP (founded in 1980) and Sequoia Capital (founded 1972) — raise a non-trivial chunk of the capital.

Why does this happen? Even though pre-2007 firms make up less of the total count of funds raised, they maintain dollar-raising dominance by raising bigger funds. And over the past decade, the size of those funds has gone up pretty significantly, as the chart below shows. 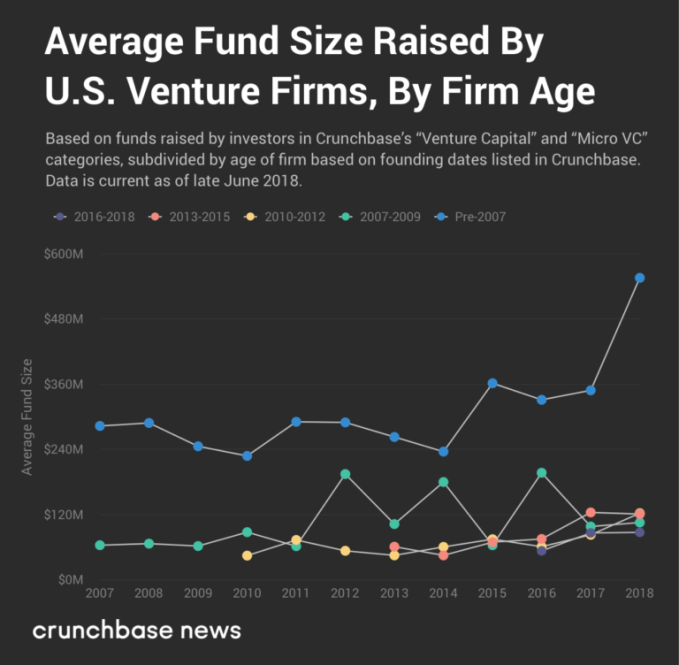 As an aside, the surges in average fund size for firms founded between 2007 and 2009 coincide with when Andreessen Horowitz raises new “Parallel” funds, which have weighed in at $1.5 billion apiece for the past three funds.

Part of the H1 2018 spike is no doubt attributable, at least in part, to Sequoia Capital’s Global Growth fund, but many other established venture firms raised big funds this year:

Based on SEC filings we’ve spotted and reported on, there’s a strong reason to believe that firms like SOSV, DCM Ventures, Foundry Group and others are collectively raising billions in dry powder that may come online within the next year or two. In other words, these old guard firms are likely to remain entrenched and push average fund size higher over time.

We’ve looked at inflating fund sizes, and the growing rounds they invest in, in the past. We’ve alluded to how these metrics reflect high and growing expectations for startups and their investors, but never quite explained why that was the case.

The average venture fund operates on a 10-year investment cycle, sometimes with an optional one- to two-year extension period. As entrepreneur Tomer Dean explained in an article for TechCrunch, to outperform the comparatively “safe” public stock market (which in the U.S. appreciates by roughly seven percent per year, on average), a VC firm should aim to return at least three times the capital initially invested in a fund. Over 10 years, that’s roughly a 12 percent rate of return.

This week, unpacking AT&T’s acquisition of AppNexus, venture investor Semil Shah wrote about the deal and potential economic challenges that even a “good” exit like AppNexus’s presents to modern venture funds. To paraphrase, if a venture capital firm owns 16 percent of a company that exits for $2 billion, it gets $320 million from the exit. Shah recounts a meeting with a seed VC, who told Shah that every investment in their firm has “a ‘RTF Magic Number,’ whereby each deal would be assigned a target exit value at which the fund would be made ‘whole’ in that sale — the idea is that you want every potential $B+ outcome to return the fund.” To, say, a fund that started with $150 million, a $320 million payout is great. For a $500 million fund, it’s kind of disappointing.

As funds get larger, so does the Return-The-Fund Magic Number, all things being equal. To compensate, investors commit proportionately more capital. And at least in some areas of the startup market — most conspicuously, in scooter startups — valuations have grown accordingly.

But if a venture investor needs to find deals that will return their fund not once, but three times, an already tall order gets taller over time.

The NVCA data we cited is provided to the NVCA by PitchBook.

For our charts, we used a slightly cleaned-up version of Crunchbase’s funds data, which we enriched and subdivided by the founding date of the U.S.-based “venture capital” and “micro VC” firms which raised those funds.

Crunchbase’s funds data is collected automatically via news stories and regulatory filings, and via data contributions from venture firms and Crunchbase users. As with any data set, it’s subject to gaps and inconsistencies.