Venmo today is officially introducing its own debit card in partnership with MasterCard, following beta tests of a Visa-branded debit card last year. The new card will allow Venmo users to pay anywhere MasterCard is accepted in the U.S., and will record transactions to the user’s Venmo account for easy splitting with friends. It can also be used at an ATM to withdraw funds from the Venmo’s account’s balance.

PayPal, which owns Venmo, declined to explain why the company shifted from working with Visa during the beta testing period to now MasterCard, only responding with a non-answer, saying that it “continues to have valuable partnerships with both companies.”

Because of the change, however, existing beta customers won’t be able to continue to use their Visa-branded Venmo cards – they’ll instead be invited to sign up for the new Venmo MasterCard, issued by The Bancorp Bank.

One benefit to moving to the new card is that it will no longer feature an ugly lump of dough on the front (get it? dough? groan…). The updated card does away with that joke, and comes in a choice of six colors including black or white, as well as selection of bright colors, like yellow, pink, blue or green.

The company explains it learned from beta customers that users preferred a “more simplified look” that also offers personalization options.

Younger, millennial customers are Venmo’s target market, and they do tend to care what their cards look like, with a preference for metal cards these days. But Venmo’s beta card missed the mark on style in a big way. Meanwhile, rival Square’s Cash card looks more upscale as a black card with users’ own laser-printed signature on the front. 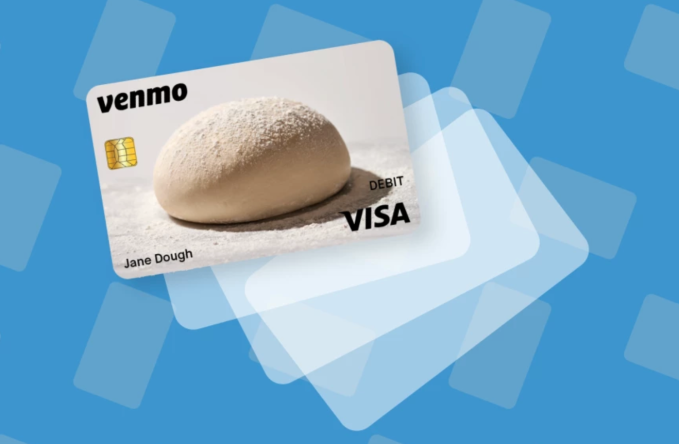 Of course, the main benefit to using a Venmo card is not how it looks – it’s that it makes splitting dinners, drinks and other purchases easier.

Instead of having to remember to charge your friends for whatever you paid for, the Venmo card purchases will show up in your account with the option to split with friends. (The card transactions default to private, but you’ll have the option to share them in your Venmo feed even if they’re not split.)

To take best advantage of this feature, you’ll want to turn the Reloads feature on which will automatically use your default funding source – that is, your bank account – to add money to your Venmo balance when you need to make a purchase.

Unlike the beta version of the card, the MasterCard-branded Venmo card can be used to withdraw up to $400 per day at ATMs displaying the MasterCard, Cirrus, PULSE, or MoneyPass acceptance marks. No fees apply for U.S. MoneyPass ATMs, while the others will charge a $2.50 ATM domestic withdrawal fee.

The card can also be managed from within the Venmo app, allowing users to activate their new card, reset their PIN, or even disable a lost or stolen card.

There are no fees for using the card for purchases, even if you get cash back at the point of sale. However, if a signature is required to get cash back at a bank, you’ll pay a $3.00 Over the Counter Domestic Withdrawal Fee, the company says.

While the card could take the place of a credit card in Venmo users’ wallets, it can’t replace your bank card – there’s no way to deposit cash or checks to your Venmo account, like you can do with a bank, and there’s no bill pay functionality.

The launch comes at a time when there’s a shift in how younger consumers are using payment cards and banking services. Many are turning to online banks, like Simple, Varo and Chime, and transfer money through peer-to-peer (p2p) payment apps like PayPal, Venmo and, now, the bank-backed app Zelle. Tech companies like Apple and Google are also getting into the p2p space, with their own services like Apple Pay Cash and Google Pay Send, for example.

Venmo says its new card is in limited release starting today. Beta customers will be invited to sign up, and others will need to fill out a form to reserve their spot.