Facebook’s kid-friendly messaging app, Messenger Kids, is expanding to its first countries outside the U.S. today, with launches in Canada and Peru. It’s also introducing French and Spanish versions of its app, and rolling out a handful of new features focused on promoting respect and empathy, including a “Messenger Kids Pledge” and something called “Kindness Stickers,” which are meant to inspire more positive emotions when communicating online.

The stickers say things like “MY BFF” or “Well Done!” or “Best Artist,” and are designed to be placed on shared photos. 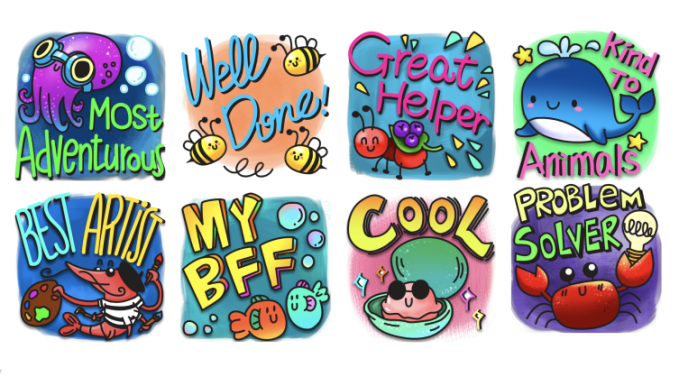 Also helpful is the new “Messenger Kids Pledge,” which is designed for both parents and children to read together, and includes some basic guidelines about how to be behave online. For example, it reminds everyone to “be kind when you communicate,” and to “be respectful,” explaining also that when someone doesn’t respond right away, they may just be too busy. “Be safe” and “have fun” are also a part of the guidelines.

This seems like a small addition, but it’s the kind of thing parents should already be doing with their kids when they introduce new technology – and many do not. Some parents don’t even know what apps kids are using, which has allowed those less secure apps to become hunting grounds for predators. 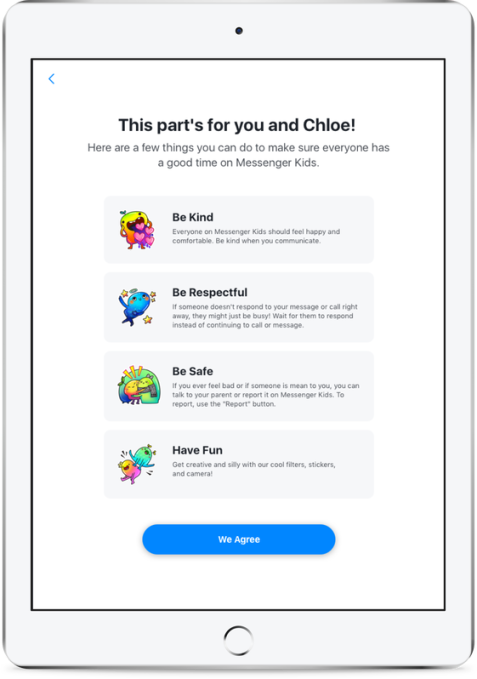 Messenger Kids works differently, as it requires parental involvement. Kids can’t add any friends without parental approval, and the app can be managed directly from parents’ Facebook.

While it’s understandable that people have a hard time trusting Facebook these days, there isn’t any viable alternative that allows kids to “practice” communicating or socializing online in a more controlled environment. Kids instead beg for apps aimed at adults and older teens, like Snapchat, Instagram, and Musical.ly – apps I personally won’t install for a “tween.”

Messenger Kids at least gives kids a way to privately socialize with approved people – kids whose parents you know and trust, and family members on Facebook. They’re at an age where you can still look over their shoulder, and correct bad behavior as it arises.

The alternative to using Messenger Kids is what a lot parents do – they refuse all social apps until kids reach a certain age, then throw them to the wolves on the internet. Is that really better?

Despite its sandboxed nature, kids like Messenger Kids because it has the features they actually want from the adult-oriented apps – like photo filters and stickers. (If the app would please add Facebook’s new lip-sync feature so I could stop hearing the begs for Musical.ly on a daily basis, I’d be much appreciative.)

Related to its push for kindness and respect, Messenger Kids will also soon roll out an interactive guide within its app called the “Appreciation Mission” which will encourage kids to discover and express appreciation for their friends and family. This will live in the “Mission” section of the app, where kids learn how to use features, like starting a video call or sending a photo.

Facebook says it consults with the Yale Center for Emotional Intelligence and a global group of advisors on the development of the features focused on these principles of social and emotional learning. (The Yale Center is a paid advisor.)

Come to think of it, a lot of adults could benefit from these sorts of features, too. Maybe Facebook and Twitter should add their own in-app kindness reminders, as well?

The app is a free download on iOS and Android.

Messenger Kids is a free, safer messaging and video chat app that provides more control for parents and more fun for kids.