The Michigan Central Station will house more than just Ford employees, though. The auto company says it will be a mixed-use facility with facilities for up to 5,000 office workers and space for shops, restaurants and maybe even residential housing.

Ford has a substantial undertaking before employees and businesses move into the building. The Michigan Central Station is nearly literally a shell of its former self.

The station was built in 1913 by the same firm responsible for New York’s Grand Central Terminal. In its day, the 21-story building stood proudly with marble floors under an arched 65-foot ceiling. It was the tallest train station in the world when its colossal bronze doors first opened to the public.

Since its closure in the ’80s the building sat empty, eventually losing nearly everything to looters and nature. The windows disappeared, graffiti covers much of the brickwork, and the ornamental ceiling is crumbling. Barbed-wire fence eventually encircled the structure, attempting to keep people out. But they don’t. The lure of the station is too strong. 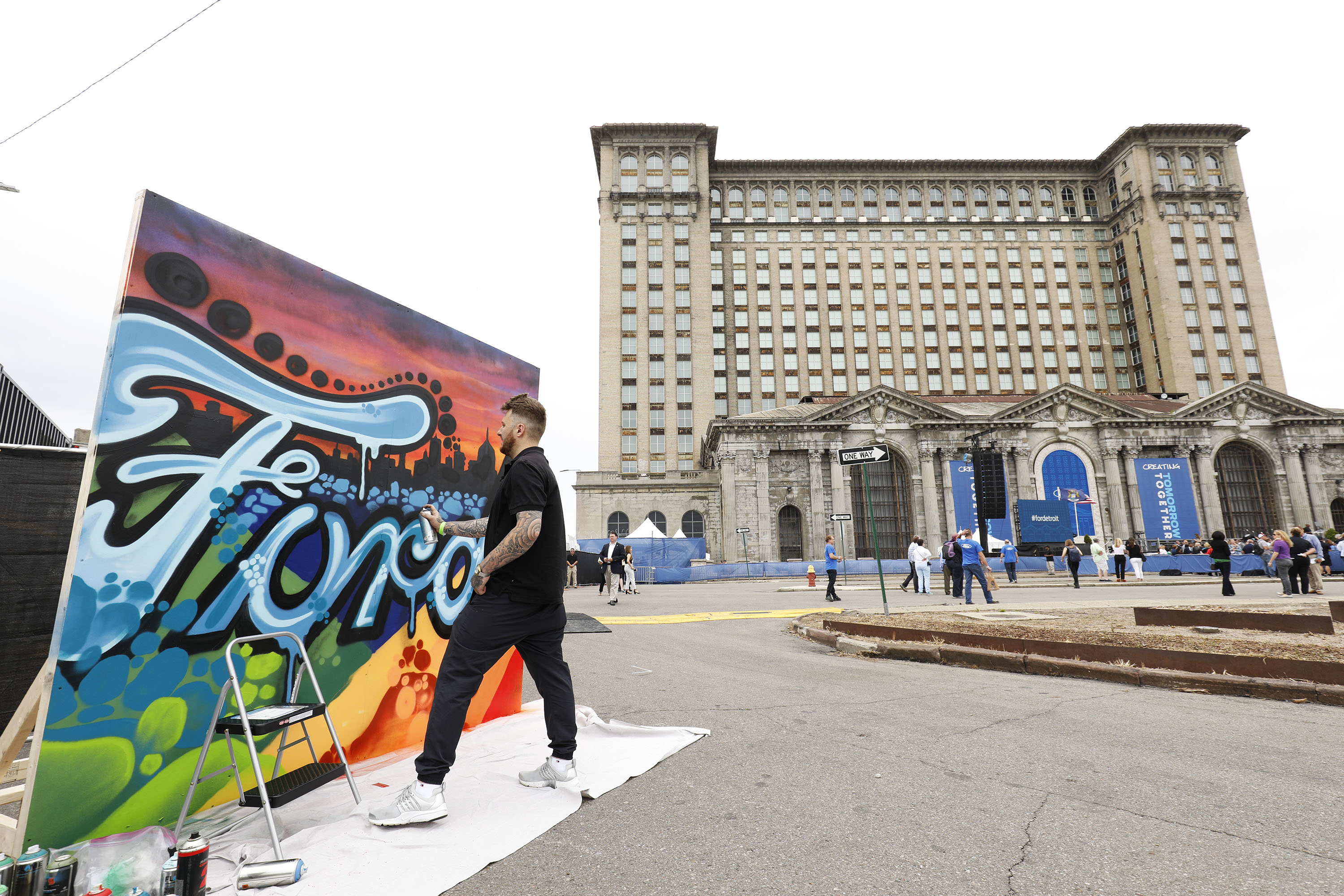 DETROIT, MI – JUNE 19: An artist spray paints a canvas at the historic, 105-year old Michigan Central train station prior to a Ford Motor Company press conference to formally announce their plans to renovate the building and turn it and Detroit’s Corktown neighborhood into a hub for Ford’s auto technology on June 19, 2018 in Detroit, Michigan. The project is expected to be completed by 2022 and will be the workplace for approximately 2500 Ford employees. (Photo by Bill Pugliano/Getty Images)

The Michigan Central Station is set to be the center of a large Ford campus centered around forward-looking automotive technology research and design. Ford sees 2,500 employees occupying the buildings by 2022. The focus is on the future of mobility including electric and autonomous vehicles, and everything from connected vehicles to roads and parking.

Ford held a large event today announcing its intentions for the campus and Michigan Central Station. CEO Jim Hackett points to the advancing revolution where, as he says, artificial intelligence and big data that will be even more disruptive than the industrial revolution.

“What Rouge was to Ford in the industrial age, Corktown can be for Ford in the information age,” said Ford President and CEO Jim Hackett said in a released statement. “It will be the proving ground where Ford and our partners design and test the services and solutions for the way people are going to live and get around tomorrow, creating a Southeast Michigan mobility corridor that spans west from Dearborn to Ann Arbor, and east to Detroit.”

The plan calls for Ford to occupy at least three buildings in the area as part of a mobility corridor Ford intends to build spanning Detroit to Ann Arbor to Ford’s home in Dearborn, Michigan. Ford says it will redesign its Dearborn campus alongside Corktown campus.

Hackett was clear on this point: The plans for the Corktown campus will not compete or replace Ford’s Dearborn campus. He stressed that it’s part of the same system.

“It’s actually one whole system,” Hackett said. “In fact, if anything it guarantees the future of Dearborn. Our Dearborn redesign [and] our Corktown revitalization are just steps in the strategy to keep moving forward.”

Ford largely operates outside the city of Detroit. The company’s headquarters, main development operations and Ford River Rouge Complex are located in the Detroit suburb of Dearborn. This move into Corktown is more than symbolic; it’s significant.

The big three automakers, along with countless automotive suppliers located in Michigan, are increasingly fighting with Silicon Valley for talent. Rightfully so, prospective employees are looking for employers that can offer a compelling work/life balance, with that, comes the place of employment. I’ve been through Ford’s Dearborn’s facilities. From an outsider’s perspective, some of these facilities feel like an aging office complex that could crush your soul at any moment.

Moving engineering teams into a Corktown campus will place these employees in the middle of a historic city on the upswing. By the time Ford moves employees into the facility by 2022, Corktown should be packed with upstart restaurants, bars and shops, ready to take the money of Ford engineers.

From Trains to Self-Driving Cars

The Detroit News explains how the deal unfolded. Along the way, the structure was inspected and deemed sound enough for redevelopment. Apparently since concrete encases the steel girders, the structure of the building has fared better than its ornamental adornments.

The station was in a state of decay before the last Amtrak train left the station in 1988 and was never an overwhelming success on its own. The station is located outside of the downtown core and relied on Detroit’s trolleys to bring riders to the station. The station also lacked a large parking facility, which became problematic after the rise of the automobile caused the trolley system to age and shut down.

The station’s interior is stunning even in its decayed state. The general waiting room reminds of a Roman bathhouse with soaring arched ceilings covered in Guastavino tile that speak to Detroit’s glorious past. Light pours through the tall windows and glass ceiling. Pillars are throughout the lobby. The arches continue in a lovely arcade that once housed shops and service stalls.

Space for 500 offices occupied the floors above the station, though the top floor of the station remained unfinished and unused through the building’s history.

The station lacked windows for years and nature did its best to reclaim the station. Water damage is visible everywhere. Tiles are falling off the arches, revealing the terra cotta backing. Stagnant water is found throughout the lower levels.

Historic Detroit states ridership peaked following World War 1 with 200 trains leaving the station daily but started to dwindle quickly in the 1950s. Amtrak took over the station from the bankrupt Penn Central in 1971, the year it was founded. The corporation spent $1 million updating the station but couldn’t save it, and the last train departed the station in 1988 heading to Chicago.

The year Amtrak unveiled the updated station, the building was added to the National Register of Historic Places. This designation didn’t increase riders, but it did save the building from being demolished after Amtrak moved out.

Since its closure, the building has traded hands several times with each owner unveiling grand plans for the building: a casino and hotel, a rail yard, an international trade center, even a police station.

The Moroun family purchased the building in 1992 and left it untouched until just a few years ago when it started landscaping the park in front of the station. The family then installed windows throughout the building. It’s unclear if this was to prepare the building for sale or other purposes.

The station sits just blocks from the former Tiger Stadium that was built in 1911 and torn down in 2008. It’s a mostly residential neighborhood, sitting just outside the downtown area. Corktown has yet to see the redevelopment boom found elsewhere in Detroit.

Though not ideal when the Michigan Central Station was built, its location is likely what brought Ford to the table. The area has easy access to major highways and is just far enough away from downtown Detroit to mostly avoid the traffic congestion. Real estate opportunities seem ample, too.

Last year Detroit enlisted the help of real estate mogul Dan Gilbert to help win Amazon’s bid for a second headquarters. It didn’t work out. The city of Detroit and State of Michigan reportedly offered Amazon a massive tax incentive but Amazon didn’t take the bait. The deal would have changed Detroit, but not necessarily for the better. Had Amazon picked Detroit, the city would have had to adjust physically and mentally to handle the supposed increase of 30,000 workers within the city limit.

Ford seems like a good fit for today’s Detroit. The company is restoring an eyesore and essentially extending the border of the downtown area. Instead of adding tens of thousands of workers like Amazon would, Ford is adding thousands of workers. The streets will get a bit more crowded, but not overwhelmed.

The area lacks a lot of the infrastructure needed for an Amazon-sized workforce. Public transportation is limited to a couple of short lines, and some suburban leaders are fighting their expansion. Parking is hard to come by and there’s a housing crunch in the downtown core. The roads are a mess and traffic congestion is getting worse. Ford’s campus, located outside the downtown areas, should avoid some of those challenges — besides the terrible roads.

This deal puts Ford back in Detroit 22 years after it sold the Renaissance Center to General Motors. Even though it’s early, Ford’s return to Detroit could prove to be as pivotal to Detroit’s future as when Dan Gilbert moved Quicken Loans downtown in 2010. Gilbert largely kickstarted Detroit’s revitalization by filling unused office space with Quicken Loans employees, but also buying up blocks of the city and convincing retailers and corporations to move downtown. It worked, and downtown Detroit in 2018 is a much different place than it was in 2008.

Questions still remain about the purchase of the Michigan Central Station. How much did Ford purchase the building for and what sort of tax incentives were offered to the auto maker and Moroun family? Will I ever be able to get a table at Slow’s BBQ again?