Tokyo-headquartered Rakuten, Japan’s answer to Amazon, is acquiring the Silicon Valley mobile ordering and pickup startup Curbside, the companies announced today. Terms of the all-cash deal were not disclosed, but Curbside had previously raised between $40 million and $50 million from investors including CVS, Index Ventures, Sutter Hull Ventures, AME Cloud Ventures, Qualcomm Ventures, Chicago Ventures, and others.

Founded in 2013 by former Apple engineers with backgrounds in location-based technology, Curbside was one of the early startups to capitalize on the idea that e-commerce’s expansion won’t entirely involve ship-to-home deliveries, but could also include the convenience of online ordering with a curbside pickup option at bricks-and-mortar retailers to speed things up.

The company first launched its own mobile shopping app with a limited set of partners, including a shopping center in San Jose and a handful of San Francisco Bay area Target stores. The Target test wrapped up some time ago, and Target instead launched its own Drive Up curbside pickup this year – possibly encouraged by the potential it saw through its tests with the third party.

Curbside then went on to power mobile orders and store pickup for CVS, which invested in the company as a strategic partner back in 2016.

The startup also developed an SDK for mobile app developers called ARRIVE that allows retailers to see when customers are arriving at their location for things like order pickup, mobile order ahead, and appointment checkin. CVS, Sephora, Chipotle, Nordstrom, Pizza Hut, Chevron, Boston Market, Westfield, HEB, and Yelp are listed on the Curbside website as ARRIVE customers.

For strategic partner CVS in particular, Curbside is available at thousands of locations across the U.S. for order ahead and pickup.

ARRIVE has since become the primary business for Curbside, and now contributes to the majority of its revenue. Curbside CEO Jaron Waldman says half of the top ten QSR’s (quick serve restaurants) are now using ARRIVE, as the restaurant side of the ARRIVE business has really taken off. These operations will continue as planned, Curbside says.

Across its customer base, Curbside has powered several million curbside pickups to date, and has over 8,000 U.S. locations, as well as some traction in non-U.S. markets, including Canada and India (Pizza Hut). 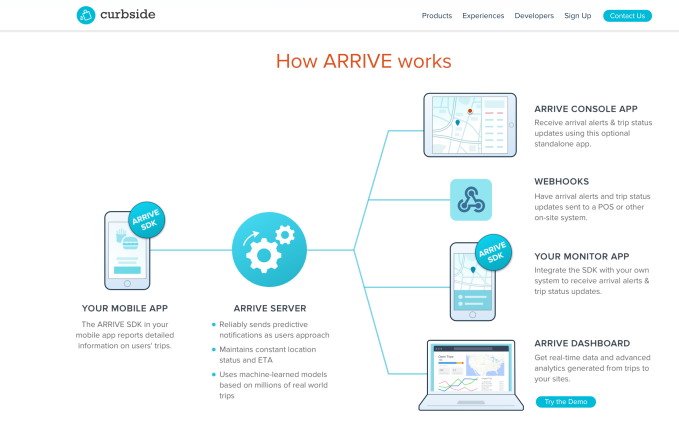 As for Rakuten, the acquisition opens up a lot of opportunities in terms of connecting retailers and merchants with customers, particularly in order ahead and pickup.

“There’s a shift happening in consumer behavior where people want to save time. They want to order ahead on their mobile device and have things ready when they get there – whether that’s in the store or curbside in front of the store,” explains Waldman. “ARRIVE works really well in both use cases…And we’re also helping [retailers] really measure the performance of the individual store,” he says. “The folks that have that physical world touch point needs to ensure that stores are performing the consumers are actually not waiting that long.”

Rakuten today reaches over 1 billion members worldwide, including those on its own Rakuten Ichiba online marketplace in Japan.

Those online merchants could potentially take advantage of the Curbside technology to offer the option of order pickup for their customers, alongside their existing delivery options.

These sorts of integrations may not be limited only to the marketplace itself, however. Rakuten also has other consumer touch points, like communications app Viber and eBates.com, where Curbside could also reach the consumer audience in various ways. And it has investments in companies like Pinterest, Lyft, Cabify, and others, where it could do the same. It also has a partnership with Walmart in Japan in online grocery, where Curbside pickup could get involved.

In fact, Waldman says there are at least half a dozen opportunities inside Rakuten it could now pursue. The question is really which ones will it go after first.

“I can say there’s a ton of interest to bring this technology to Japan,” he notes. “They already touch 100 million consumers in Japan – their registered users. We could hook up this really big ecosystem of consumers and merchants,” adds Waldman.

He’s also excited to broaden the Curbside offering thanks to Rakuten’s expanded resources.

“We don’t have an out of the box payment solution. There’s a lot lot in the Rakuten ecosystem that’s going to allow us to to broaden that offering, which means that we can add more value for for our merchants and our retail partners,” he says.

And as a part of Rakuten, Curbside can more quickly expand to global markets – something it had just begun doing with smaller launches in Canada and India.

“Rakuten was founded on the philosophy of empowering merchants to reach consumers in new ways. In 1997 it was selling on the internet. Today it’s mobile commerce. Curbside has a unique ability to surprise and delight consumers with fun and convenient ways to shop while empowering local merchants,” says Yaz Iida, President of Rakuten USA. “It fits into our unique philosophy and will be a piece of Rakuten’s ecosystem of internet services.”

Curbside’s 60-person team, for the time being, will remain in its Palo Alto offices, though it may later move to Rakuten’s offices in San Mateo. Waldman remain as Rakuten Curbside CEO.

The startup had raised between $40 million and $50 million, including its undisclosed investment by CVS in 2016. Before that, it had raised $34.5 million, according to Crunchbase.