As the developer community prepares for Apple to unveil its latest software efforts at the company’s WWDC keynote later this morning, there is a younger subset of student developers feverishly roaming about excited to see what they can build next, too.

WWDC is a pretty pricey affair at $1,599 per ticket. Like some other tech companies, Apple has opted to make it a bit easier for students to attend their conference. They’ve done so through a scholarship where younger developers can submit applications and, if selected, get into the event for free, with their lodging paid for as well.

The more than 350 scholarship recipients this year represented 42 countries and 34 languages. This year, those students got another added perk as their regular agenda was interrupted by a trip to Steve Jobs Theater on the Apple Park campus and a meet-and-greet with CEO Tim Cook. Later, the exec tweeted a video of what some of the students were working on, saying, “Nothing inspires us more than fresh ideas.” 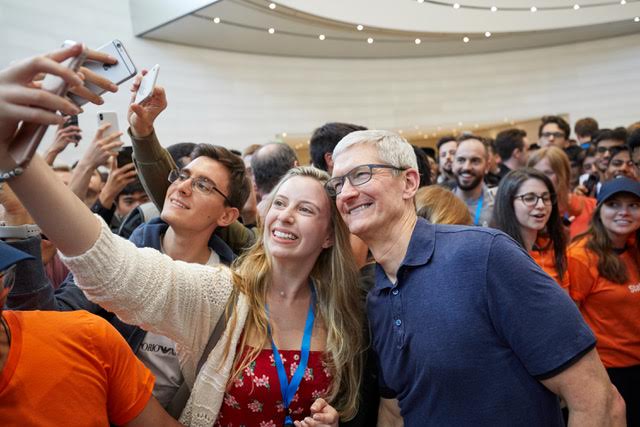 I had the chance to sit down with a few of these young attendees, the youngest of whom was 16 years old (though students as young as 13 could apply), and chat about some of the things they are building.

“This is my third year at WWDC,” Nathan Flurry, 19, told TechCrunch. “I grew up in a very rural community and I rarely ever left the town, so WWDC was like the first time I got to meet people who cared about the same thing I did.”

As part of the application, students had to build and submit an interactive Swift playground that could be experienced in a few minutes. Flurry built a visual programming language powered by Apple Pencil interactions.

So… I built a rudimentary visual programming language that assembles to Swift and lets you create everything entirely with an Apple Pencil using #OCR + #CoreML. I highly suggest you check out the playground and then the standalone app! https://t.co/gaphvyNIWp pic.twitter.com/uzm4cIF5t8

Another student I chatted with, Joseph Lou, 16, submitted a project for the scholarship that was aiming to recreate the system which the late Stephen Hawking used to communicate. “The app that I built for this scholarship was actually my first app and it was also my first time working with Swift,” Lou said.

It was clear that all of these exceedingly bright teens were also working on some pretty big projects of their own. Gabrielle Ecanow, 18, is working on an app called Study Buddy that allows students to coordinate tutoring and studying. Roland Horváth, 17, has built several apps, the latest of which is Try Not to Smile, which plays a bunch of funny videos for users and utilizes the iPhone’s front camera to see how long they can make it without cracking a smile.

“I started programming when I was 12, and I just thought it would be super cool to build an iOS app,” Yerra told TechCrunch. “I’d say WWDC 2016 was a major breaking point because that’s when I actually met a couple of my best friends and we went on to build an app…”

Waiting in line with the squad at #WWDC18 #WWDCScholars pic.twitter.com/lt6gX9QOUM

As the group heads into the conference starting Monday, many of them are focused on using the opportunity to connect with other developers and see what they can build next.

“I come back for the connections,” Flurry said. “The keynote is great, I love being here and it’s cool to see it, but I really love being around all of the engineers and meeting other developers who share a passion.”