Following the success of the live mobile game show HQ Trivia, a team of serial entrepreneurs have begun testing the market to see if another game show concept can work, too. Their new game show-inspired app, Gravy, is meant to be a riff on the “Price is Right” combined with a QVC-style shopping experience. That is, the “contestants” compete for discounts of 30 to 70 percent off the products advertised, with a portion of the proceeds going to charity. In addition, through a side game, users can guess when the product – whose quantities are unknown – will sell out and at what price. Those who guess closest win a cash prize.

The startup was created by Mark McGuire, Brian Wiegand, and Craig Andler – the founding team behind Jellyfish.com, an older social shopping network that was acquired by Microsoft back in 2007, to help create Bing Shopping. They’ve also paired up on other projects, including NameProtect (before Jellyfish), printable coupons resource Hopster, social network Nextt, and e-commerce subscription retail site, Alice.com. These have either exited or shut down or both.

The team’s efforts imply a clear passion for working with brands, but getting consumers to connect with brands in new ways is far more difficult, as their track record shows.

The hope is that the excitement around seeing the product unveiled nightly – and knowing you’ll get a big discount if you buy – will become an entirely new ad unit of sorts, while keeping players engaged in a game-show like experience. 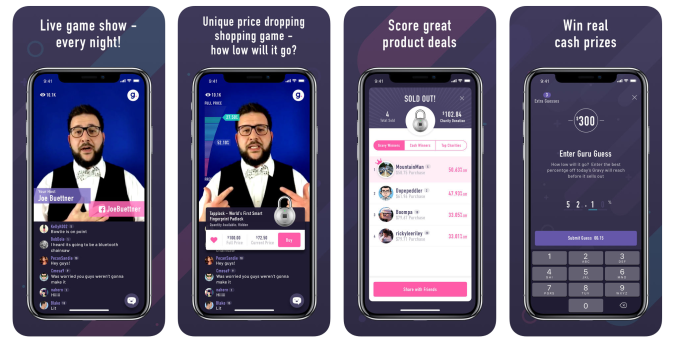 “One of the challenges with millennials is their short attention spans, and they don’t respond well to interruptive advertising,” explains Wiegand, of why the team wanted to build this startup. “I don’t think anyone’s really mastered how to monetize live video. So we came up with this opportunity to create this new ad unit where brands could tell their story, and – for seven or eight or nine minutes – create a live shopping event where millennials can tune in and hear that story but in a fun, gamified kind of manner,” he says.

Here’s how Gravy works. Every night, at 8:30 PM ET in the Gravy iOS app, a live host will unveil the product users can buy. Currently, there’s a rotating selection of hosts who work on a per-show contract basis, usually local comedians – not brand reps.

Players are not told how many items are available, but it’s typically anywhere from two to twenty.

Then the price starts to drop. If you buy early, you’ll have a chance to snag it at a slight discount. But the longer you wait, the higher the percentage off will become. However, you don’t know who else could snatch it up first and when. If you wait too long, the product will sell out.

Meanwhile, if you’re not interested in the product itself, you can guess when you expect it to sell out (meaning, at which price.) Those ten or so closest will receive a small cash prize – a split of maybe $200 or $300, with first place receiving the largest chunk.

At least 20 percent of sales are given away to charity – a nod, I suppose, to millennials’ interest in do-gooder style companies. But ultimately, that decision that has more to do with the fact that Gravy doesn’t aim to be a retailer – it’s not another deal-of-the-day destination like Woot!, despite the similarities around generating product excitement.

Instead, it expects brands to donate products and pay a fee for the “advertising opportunity” Gravy offers.

Brands will like Gravy because they get millennials’ attention for seven minutes or more, Wiegand says. “They love the engagement. It’s a highly engaged audience…I have a chance to buy the products, so I’m heavily engaged in thinking about that product. The recall, memorability, and all of the subsequent buzz – tweeting and all the social media that gets created because of that – is great,” he adds.

However, none of this is proven out yet – Gravy is just a couple of weeks old.

So far, around 50 percent of the products it has featured have actually been donated by brands, including 23andMe, 3D Doodler, Tapplock, and others. The rest have been subsidized by Gravy, including the bigger draws – like a DJI drone, for example.

It’s not yet charging for the ad opportunity, either, as it’s hoping to grow the audience first.

The company says that’s already underway. After alerting friends and family to the app’s launch, the games are seeing 600+ players nightly, Wiegand claims, and is growing its audience 15 percent week-over-week. Around half of those who signed up to play are returning to watch around three shows per week, he says.

While the early numbers are promising if true, and it’s clear the team likes to work in the general space of connecting brands with consumers, Gravy still feels – like much of what the founders have created before – designed primarily with the needs of brands in mind, before that of consumers.

A “Price is Right”-style app would be a lot of fun, but this isn’t it – it’s, at the end of the day, an invitation to watch an ad and shop at a discount. That’s not something consumers may want to do every day, long-term – even if you try to woo them with a small cash prize won through a guessing game.

And like Trivia HQ , which has dropped from a top 20 app to the 140’s (by App Store overall rank, the shine may eventually wear off for Gravy, too. Especially because it’s not primarily a game – and millennials, as fickle and short attention-spanned as they may be (really? the generation that binges entire TV seasons in a few days?), will know it.

He says he gets bored with trivia apps in a few weeks, but Gravy is different.

“I always shop and I always like a deal. The deal industry and the shopping industry are so much larger than the trivia space,” Wiegand insists. “And the thrill of seeing a product that you like going down into the sixties and seventies percent off is unbelievably thrilling,” he enthuses. “We are able to feature things that have the best price on the planet of first-run products…it creates this heart-pounding, exhilarating and experience like, ‘Should I buy? Oh my God, look at this price. I can’t turn it down,'” he says.

The company raised $2.1 million in seed funding from a range of investors, including the founders at the turn of the year. Around eighty percent was outside capital, led by New Capital. The under-20 person team is based in both Madison and Minneapolis.

Gravy is on the App Store here.