People really love getting their coffee more quickly. Starbucks, which has operated its own mobile payments service since 2011, is the market leader in terms of mobile payments users, beating out Apple Pay, Google Pay, and Samsung Pay, according to a new reporter from eMarketer out this morning. However, Starbucks’ lead over Apple Pay is only a small one – in 2017, it had 20.7 million U.S. users compared with Apple Pay’s 19.7 million. And that gap will remain small this year, with 23.4 million using Starbucks’ mobile payments compared with 22 million using Apple Pay.

The wide adoption of the Starbucks mobile payment service is not only due to speed and convenience that the barcode-based payment system offers – it’s also because payments are tied to loyalty, and the Starbucks app is where customers can monitor and manage their card balance and their “star rewards.” In addition, Starbucks has the benefit of being able to offer a consistent payments experience across its stores – there’s never a question in consumers’ minds as to whether they can use its mobile payments service. They know they can.

Other mobile proximity payment services don’t have the same advantage, as many retailers still don’t offer payment terminals that support the tap-to-pay services like Apple Pay and Google Pay. 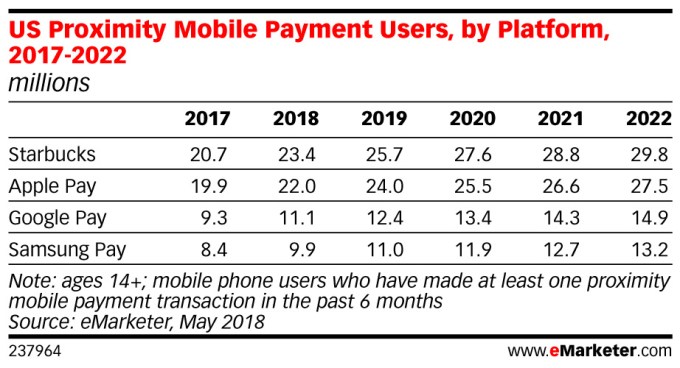 Those numbers will increase across the board through 2022, but the rankings will remain the same – with Starbucks then seeing 29.8 million users to Apple Pay’s 27.5 million.

However, this forecast appears to be discounting the impact of the recent expansion of Apple Pay, which will allow users to send payments to friends through iMessage. When you receive this money, it’s added to an Apple Pay Cash card in your iPhone’s Wallet, which can then be used in stores, in addition to in apps or online. This built-in payments service inside one of the largest messaging platforms could prompt more users to adopt Apple Pay, even if they hadn’t before.

Another note: it seems which services are more popular than others is also tied to how long they’ve been around.

Apple Pay launched before Samsung and Google Pay, and is now accepted at more than half of U.S. merchants. Google Pay isn’t as widely accepted, but is pre-installed on Android, which will help it grow. Samsung Pay, meanwhile, has the lowest adoption in terms of users, but is most accepted by merchants, says eMarketer.

The rankings of the various payment services wasn’t the only notable finding from eMarketer’s new report.

The analysts also found that this year, for the first time, more than 25 percent of U.S. smartphone users ages 14 and older, will have used a mobile payment service at least once every six months. The number of payments users will increase by 14.5 percent to reach 55 million by the end of 2018, the firm estimates. 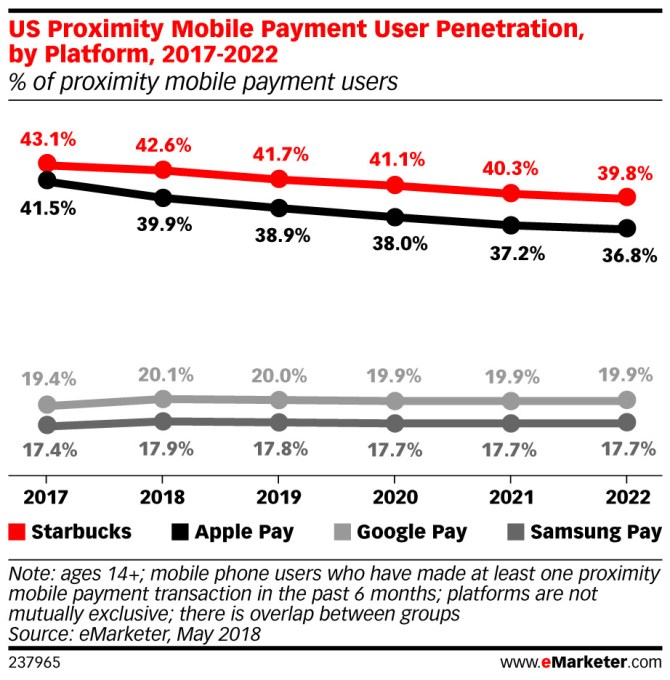 But over the next several years, these top four services will see their share of the mobile payments drop, even as their user numbers grow. That’s because they’ll face increased competition from other new payment apps, including those from merchants themselves.

“Retailers are increasingly creating their own payment apps, which allow them to capture valuable data about their users. They can also build in rewards and perks to boost customer loyalty,” eMarketer forecasting analyst Cindy Liu says.

eMarketer’s forecast (paywalled) is based on an analysis of third-party data, including Forrester, Juniper Research, and Crone Consulting’s data on U.S. mobile payments users.

Note: Updated after publication to clarify the data is focused on U.S. mobile users