A “dating app for teachers” is an odd but useful way to describe the startup Selected, which has just closed on $1.2 million in seed funding for its recruiting platform for educators. And, in all fairness, Selected said it first. The startup’s own website describes itself (a bit tongue-in-cheek) as a “dating app for job-seeking teachers and hiring schools.”

Before you roll your eyes at the shorthand being used here, let’s skip ahead to the main point. And that is – like dating apps – Selected takes advantage of profile-matching technology in order to help teachers find good jobs they’ll want to keep.

With Selected, this involves connecting candidates to schools based on mutual fit in terms of personal preferences, school culture, and teaching methods, among other things.

The dating app comparison didn’t just come out of nowhere, though.

The company began as a tutoring app in New York City, during which time it had teachers building out profiles where they would details their certifications and expertise. But the team found that it was schools who had interest in this app, not parents. In fact, the schools asked if they could reach out to the tutors and offer them jobs.

Seeing an opportunity, Selected pivoted to work on a teacher-to-schools matching app instead, instead of one for tutors.

Another reason for the comparison is that early employee, COO Eric Kim, was formerly a senior product manager at the dating app OKCupid.

“We started talking to him early on as we were thinking about how matching should be designed,” explains Selected co-founder and CEO Waine Tam, a Princeton grad whose own background is in software engineering and education.”[Selected is] similar to a dating app-type interface where you answer a couple of questions about what you’re looking for,” he adds.

However, Tam cautions that – also like dating apps – matches often don’t click until teachers and those hiring them meet in real life.

But Selected can at least get the process started by asking teachers to answer questions that help schools determine if they’re a fit – things like “how much do you value progressive education?” or “do you prefer inquiry-based learning over explicit instruction?,” for example. 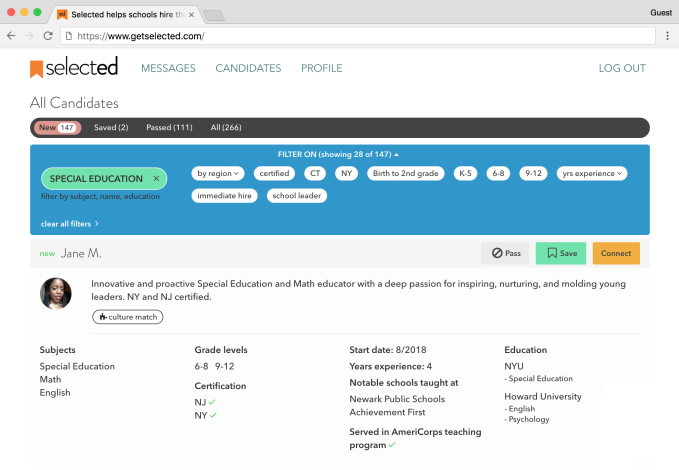 This is combined with the collection of more objective data schools need to know, like teachers’ certifications or where they want to work.

The company has only been through one school year cycle since its launch in May 2016, and it placed around 100 teachers through the service that was then live only in New York.

It’s since expanded to reach 10,000 teachers and over 500 pre-K-12 public and private schools. The schools signed up on its platform are largely spread across the Northeast in urban metros like NYC, Boston, Newark/Trenton/Camden, N.J., Bridgeport/New Haven, Connecticut; Philadelphia, and D.C.

The startup’s long-term goal is to help teachers find jobs they like in order to reduce turnover in the U.S. educational system.

Today, there are over 3.8 million teachers in the U.S., the company notes, making teaching one of the largest professions in the U.S. But every year, over 500,000 teachers turn over nationally – something Selected sees as an opportunity to make better matches, in the hopes of keeping teachers long-term.

One of the issues is that teachers have trouble finding jobs despite high demand because they apply to schools that have different requirements than what they bring to the table. Other times, they don’t end up in the right jobs, because the hiring process doesn’t offer a lot of transparency around critical topics, like school culture.

“The number one driver of teacher retention, or on the other side – attrition – is a poor culture match,” Tam points out. 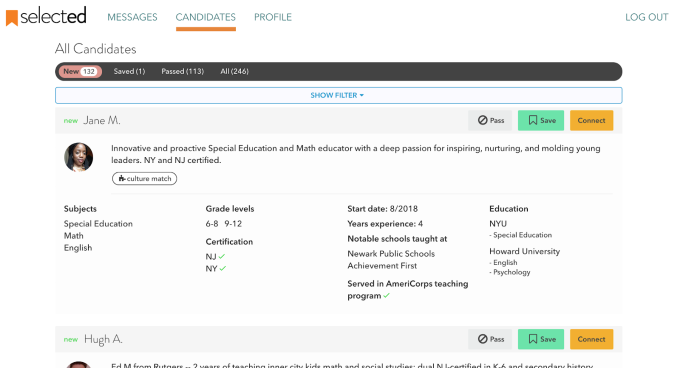 After teachers sign up on Selected, they’re screened for certifications before being approved. Selected then helps applicants with their resumé, and offers coaching.

The teachers then just sit back and wait for schools to reach out with offers. In their first week, they receive around 5 matches, and average around 15 in total. It’s too soon to say if Selected’s hypothesis around improving teacher retention is paying off. That won’t be known for several years still.

Schools are charged a fixed fee when a teacher is hired, which is currently the only source of revenue for the company.

Propel Capital led the seed round, which included participation from Kapor Capital and other investors.

With the seed funding, Selected will continue to develop its business in the NE U.S., and, later, the rest of the country.

New York-based Selected is currently a team of four full-time and four part-time, including co-founder and CTO Luis Pazmiño.