On Thursday, Democrats on the House Intelligence Committee released a massive new trove of Russian government-funded Facebook political ads targeted at American voters. While we’d seen a cross section of the ads before through prior releases from the committee, the breadth of ideological manipulation is on full display across the more than 3,500 newly released ads — and that doesn’t even count still unreleased unpaid content that shared the same divisive aims.

Russia sought to weaponize social media to drive a wedge between Americans, and in an attempt to sway the 2016 election. They created fake accounts, pages and communities to push divisive online content and videos, and to mobilize real Americans.

After viewing the ads, which stretch from 2015 to late 2017, some clear trends emerged.

Many, many of these ads targeted black Americans. From the fairly large sample of ads that we reviewed, black Americans were clearly of particular interest, likely in an effort to escalate latent racial tensions.

Many of these ads appeared as memorials for black Americans killed by police officers. Others simply intended to stir up black pride, like one featuring an Angela Davis quote. One ad posted by “Black Matters” was targeted at Ferguson, Missouri residents in June 2015 and only featured the lyrics to Tupac’s “California Love.” Around this time, many ads targeted black Facebook users in Baltimore and the St. Louis area. 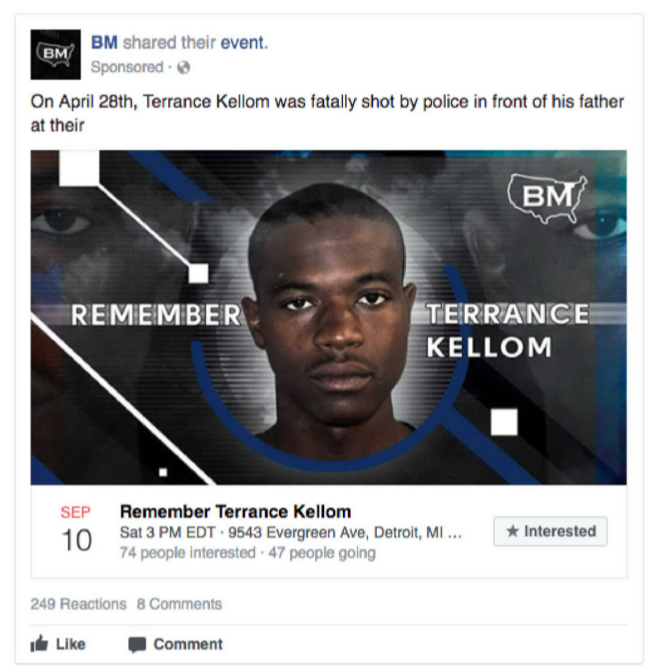 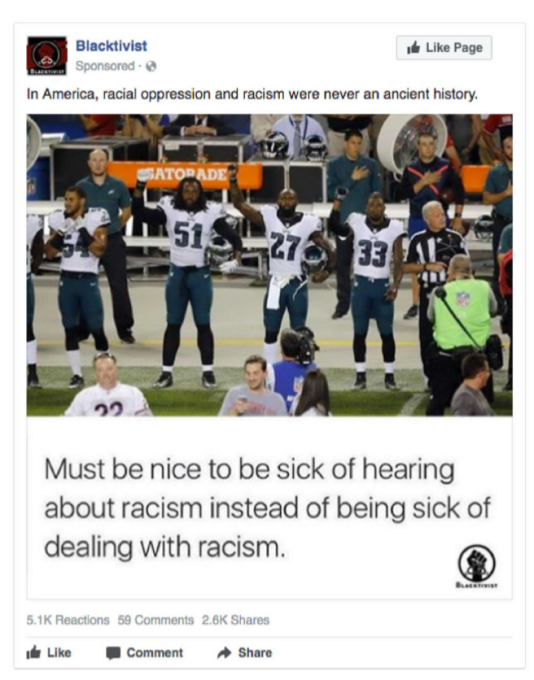 Not all posts were divisive (though most were)

While most ads played into obvious ideological agendas, those posts were occasionally punctuated by more neutral content. The less controversial or call-to-action style posts were likely designed to buffer the politically divisive content, helping to build out and grow an account over time.

For accounts that grew over the course of multiple years, some “neutral” posts were likely useful for making them appear legitimate and build trust among followers. Some posts targeting LGBT users and other identity-based groups just shared positive messages specific to those communities. 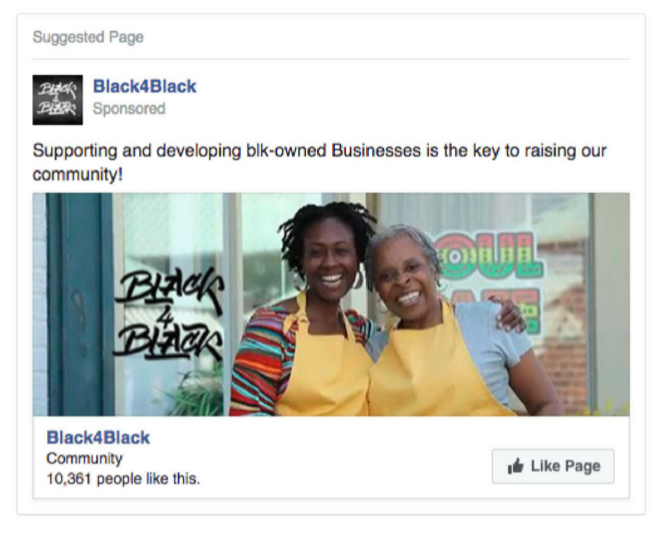 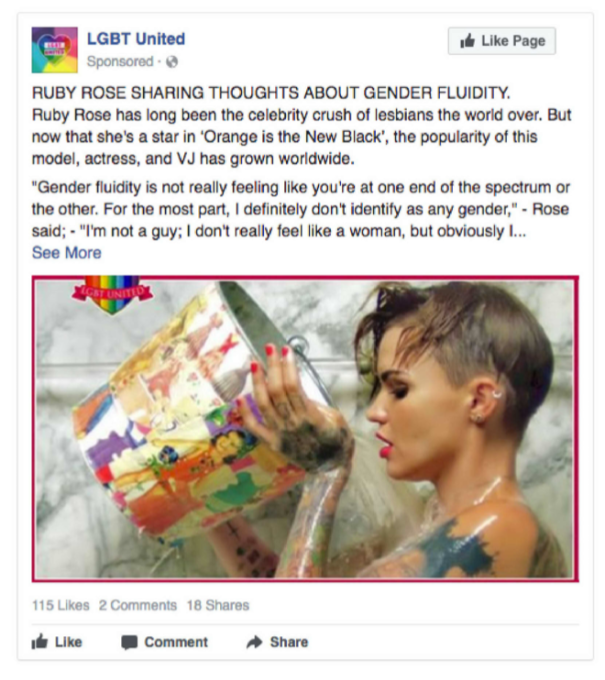 Some ads we came across targeted Buzzfeed readers, though they were inexplicably more meme-oriented and not political in nature. Others focused on Facebook users that liked the Huffington Post’s Black Voices section or Sean Hannity. 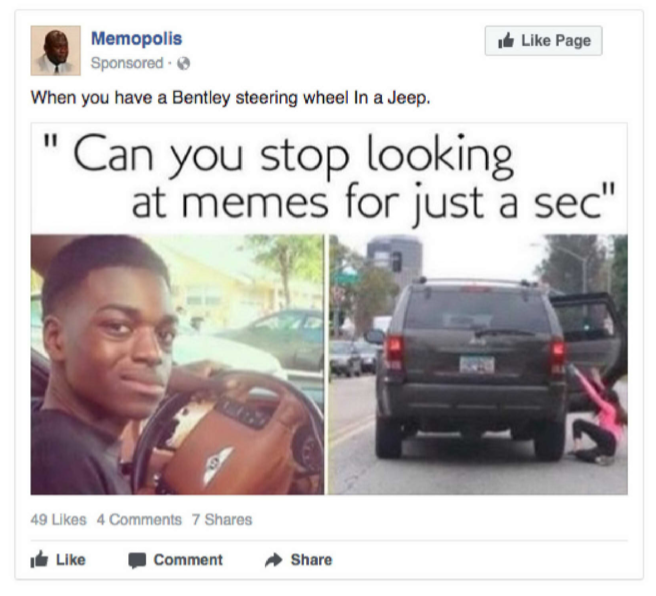 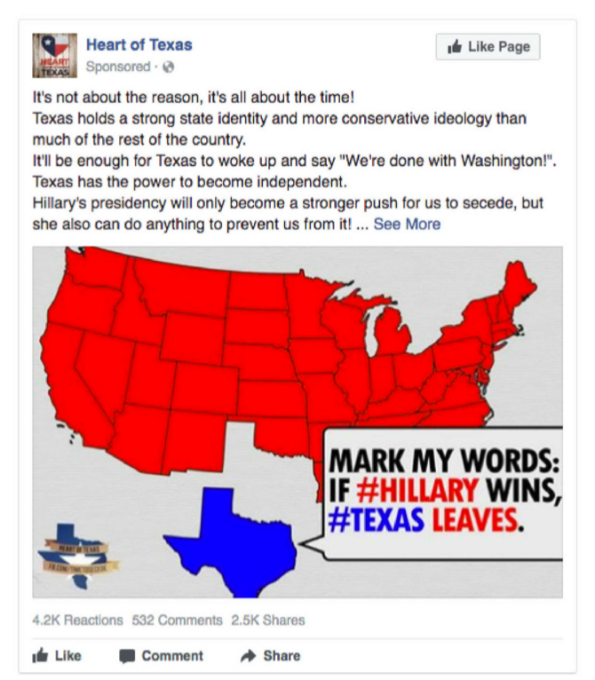 Conservatives were targeted on many issues

We already knew this from the ad previews, but the new collection of ads makes it clear that conservative Americans across a number of interest groups were regularly targeted. This targeting concentrated on stirring up patriotic and sometimes nationalist sentiment with anti-Clinton, gun rights, anti-immigrant and religious stances. Some custom-made accounts spoke directly to veterans and conservative Christians. Libertarians were also separately targeted. 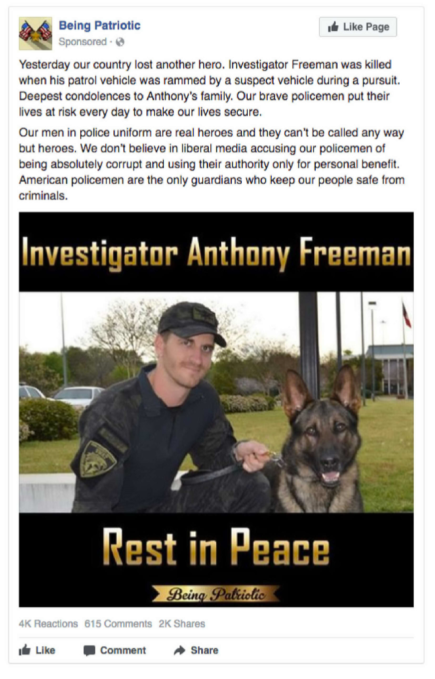 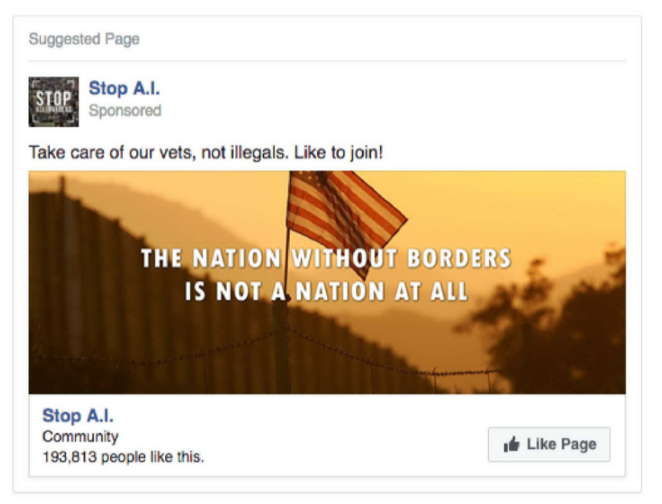 Among the Russian-bought ads, event-based posts became fairly frequent in 2016. The day after the election, an event called for an anti-Trump rally in Union Square even as another ad called for Trump supporters to rally outside Trump tower. In another instance, the ads promoted both a pro-Beyoncé and anti-Beyoncé event in New York City. 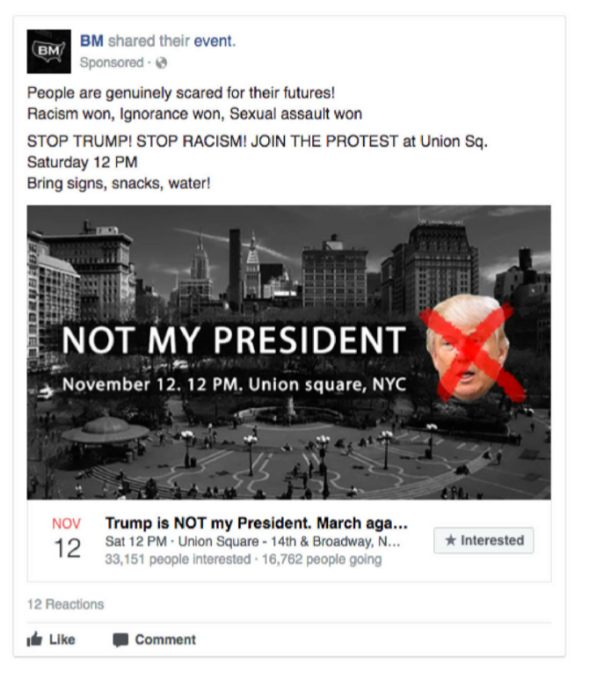 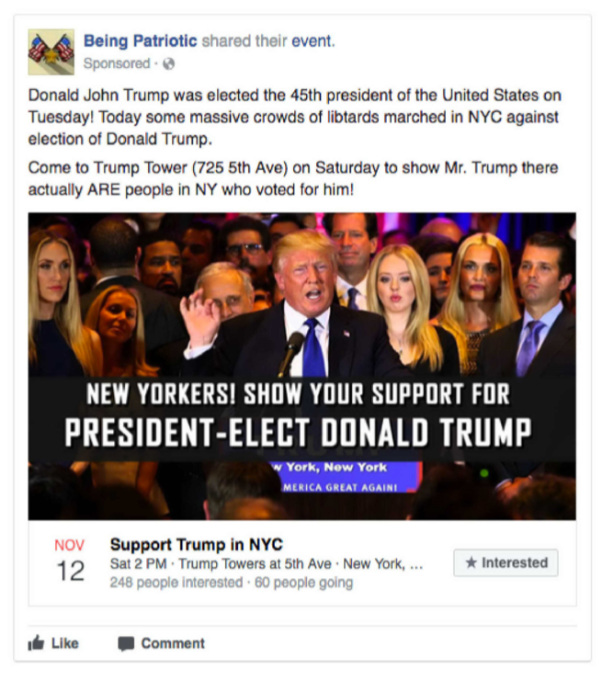 Consistent with the intelligence community’s assessment of Russia’s intentions during the 2016 U.S. election, among the candidates, posts slamming Hillary Clinton seemed to prevail. Pro-Trump ads were fairly common, though other ads stirred up anti-Trump sentiment too. Few ads seemed to oppose Bernie Sanders and some rallied support for Sanders even after Clinton had won the nomination. One ad in August 2016 from account Williams&Kalvin denounced both presidential candidates and potentially in an effort to discourage turnout among black voters. In this case and others, posts called for voters to ignore the election outright. 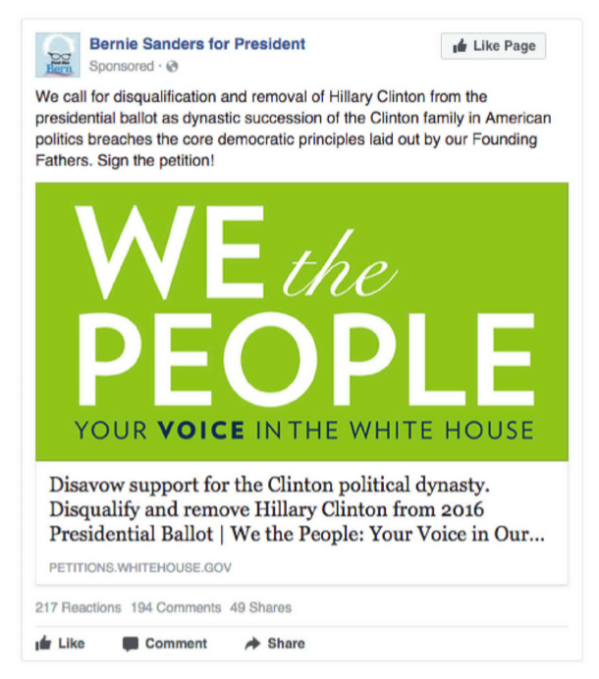 While efforts like the Honest Ads Act are mounting to combat foreign-paid social media influence in U.S. politics, the scope and variety of today’s House Intel release makes it clear that Americans would be well served to pause before engaging with provocative, partisan ideological content on social platforms — at least when it comes from unknown sources.