Facebook is adding support for in-app purchases to its Instant Games platform, the company announced during a session on gaming at its F8 developer conference this afternoon. The feature will allow game developers to add another form of monetization beyond advertising to their games on select platforms, but not on iOS.

Instead, support for in-app purchases will be available to Instant Games on Android and on Facebook.com on the web.

First launched in 2016, Facebook opened up Instant Games to all developers last month. The platform allows developers to build mobile-friendly games using HTML5 that work across both Facebook and Messenger. The idea is to give game developers access to another sizable platform for their work, in addition to the existing app stores run by Apple and Google.

Facebook has had in-app purchases on its roadmap for Instant Games for some time, and began testing the feature with select developers around six months ago. 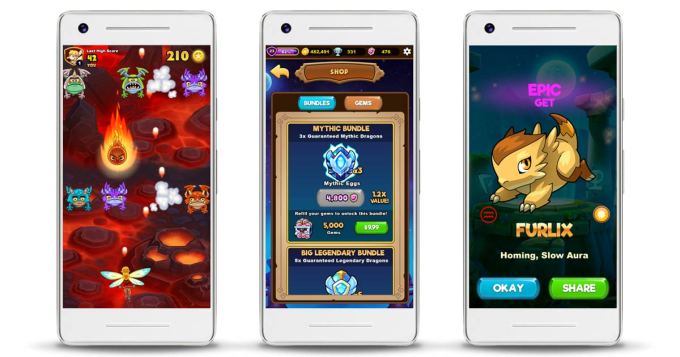 Similar to the app stores, the revenue share model for Instant Games is 70/30 on Facebook.com. However, on mobile, the games will follow the in-app billing terms from each platform, the company notes. That means purchases made in games running on Android devices, the 30 percent revenue share will apply after the standard mobile platform revenue share — aka Google’s own 70/30 cut.

That’s not ideal, of course. And all the hands in the pie may lead to game developers pricing their in-app purchases higher, as a result.

Facebook seems to acknowledge this concern in its blog post announcement, saying: “Our primary goal is to build [in-app purchases] in a way so that our developer partners can sustain and grow, and we’ll continue to evaluate rev/share with that goal in mind.”

Facebook wouldn’t confirm if or when support for in-app purchases is coming to iOS.

In addition to helping developers generate revenue outside of using ads in their games, in-app purchases in games could prove beneficial to Facebook as well. The company’s payment revenue has dwindled over the years, with things like Messenger payments never really seeing significant attention. Plus, Facebook made it possible for third-parties like PayPal to operate over Messenger, which signaled its disinterest in the payments space in general.

In-app purchases in games turns things around, a bit.

The submission process for in-app purchases will open up to developers on May 7, allowing them to implement the monetization features on Android and the web. In the meantime, Facebook is offering documentation about the feature here.