The buzz or chime of a push notification on your phone is, at best, a distraction, and at worst, a source of stress and anxiety. A new app called Aloe Bud wants to make those push notifications into something more welcome: gentle reminders to take care of yourself and your own needs. With its configurable reminders, Aloe Bud will encourage you to take a break, drink water, move your body, rest, breathe, and more.

The app is the latest to enter the booming “self-care” market, which caters to a largely younger demographic who are better handling the pressures of modern-day life by carving out time for themselves to mediate, relax, and practice other mindfulness techniques. Some older folks have scoffed at the movement, claiming millennials are too self-involved – or they just scratch their head in confusion. (“Mindfulness?”)

But there’s real demand for these self-care applications and services – in the first quarter of the year, the top ten self-care apps pulled in $15 million in revenue. Now who’s scoffing?

However, most of the self-care apps today are focused on meditation and calming techniques, not on the day-to-day aspects of self-care.

That’s where Aloe Bud comes in.

Even cynics will have to admit the app is kind of adorable with its soft color scheme and its original, retro-ish pixel art icons.

It’s also simple to use – there’s no sign-up process where you have to give your name, email or phone number. No “friend-finding” function, nor the competitive pressures of joining yet another social network, where people can track your activity and judge you accordingly. Instead, the app launches you right into a simple screen where you tap icons like “hydrate,” “breathe,” or “motivate” to set up when and how you want to be reminded. You can choose to use Aloe Bud without reminders by just checking in to those activities, if you prefer, and you can use it for journaling, too.

If you plan on using Aloe Bud long-term, you’ll probably want to pop for the $4.99 expansion pack which includes different versions of the reminder texts so your notifications’ messaging doesn’t become too routine. However, the app itself is free to use. 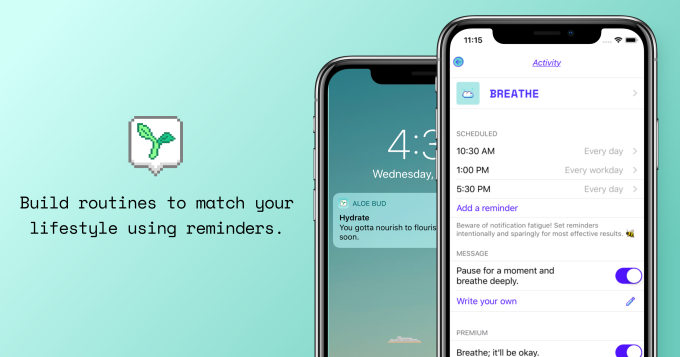 The idea for Aloe Bud – whose name is meant to invoke the soothing qualities of the Aloe plant – comes from Amber Discko.

Discko’s background in community, social, and development led to a number of opportunities over the years, including running social media for the popular Denny’s Twitter account, working as a creative strategist at Tumblr, founding the online publication and community Femsplain, and working on the digital organizing team for the Hillary for America campaign.

When the election was over, Discko needed to recover, and turned to self-care apps.

“I found myself destroyed mentally afterwards. I wasn’t leaving the house at all. I needed to find a way to get myself back to a grounded normal state,” they said.

Discko then tried a number of other self-care apps, but didn’t feel any of them did the trick.

“I didn’t find myself really keeping with it. I either forgot about the app, or I felt like they were shaming me, so I deleted them right away,” Discko said. “I couldn’t find one that felt like it worked for my personal needs – I’m a sensitive person. I work best with positive, encouraging reinforcement,” they added.

Aloe Bud was born of these frustrations, but originally as an online community where people could check in with their self-care routines. However, there was growing demand to turn the self-care system into an app. To raise the funds for the app’s development, Discko ran a Kickstarter campaign, which led to 1,538 backers donating over $50,000 to the cause.

The app went up on the Apple App Store this week, and was pre-ordered by 1,000 people. By day one, it had already gained 5,000 downloads.

Aloe Bud is deceptively simple. A lot of care and research actually went into its making, as it turns out.

Discko worked with a mental health researcher to help craft the app, and referenced other research in the space, as well. They even carefully selected language in the app so it wouldn’t be triggering – for example, the reminders to eat aren’t referenced as “food,” which people have hang-ups about (or possibly even eating disorders). Instead, it’s referenced as “fuel.” 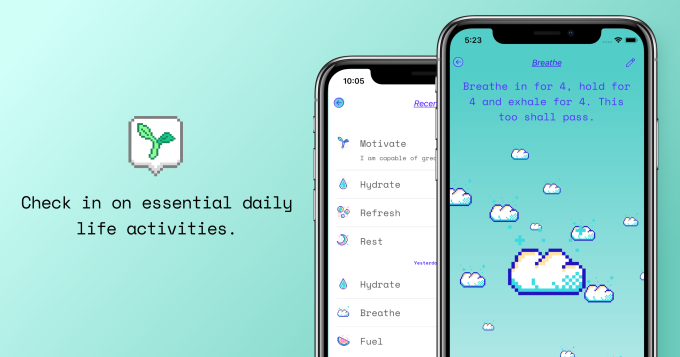 Aloe Bud is not for everyone, but it will make sense for those who appreciate little reminders to take care of ourselves – like those in Apple Watch, which now alerts you to stand and to breathe, for example.

And it could be especially useful for those who work online, or who face ongoing harassment because of their work – something Discko is familiar with, too.

“I was getting toxic push notifications and it was really destroying my sanity for a while. I deleted Twitter off my phone and replaced it with Aloe Bud,” said Discko. “I encourage a lot of people to do that.”