Hooch, the subscription startup that allows members to claim one free drink per day from hundreds of different bars and restaurants, is adding a new membership level called Hooch Black.

Signing up for Hooch Black will cost you significantly more than the regular subscription — instead of $9.99 per month, it’s $295 per year. And you don’t just get in automatically; you actually need to fill out an application.

But in exchange for that money and work, Hooch Black members get access to a variety of perks (on top of the standard drink-a-day option), including deals at more than 100,000 hotels worldwide — co-founder and CEO Lin Dai said that because they’re only visible to members, Hooch gets access to lower “unpublished” prices that you won’t find elsewhere online, with discounts as high as 60 percent.

It also offers preferred reservations, discounts and free champagne at select restaurants. And there are other giveaways, too — in New York City, the launch offerings include Hamilton and Governor’s Ball tickets.

Dai suggested that Hooch has always been meant as an antidote to apps that “facilitate a couch economy” — instead of delivering stuff to your home, Hooch convinces you to go out to bars. Dai said Hooch Black “continues the concept” with all additional perks tied to real-world experiences. (There’s some couch-centric stuff too, like a $100 Postmates credit.) 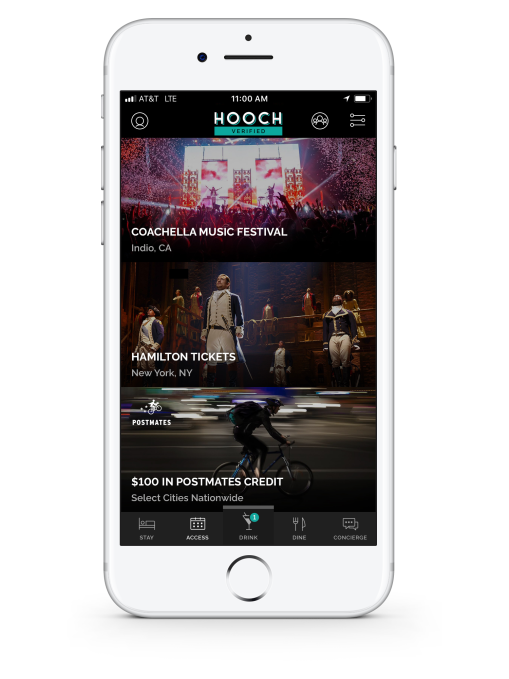 In addition, Hooch Black members will get access to what Dai described as a “concierge who can make travel arrangements and dining reservations for you.” (Those reservations don’t have to be with Hooch partners, by the way.) He compared the experience to an American Express concierge, but with the advantage that the communication is handled in the Hooch app: “No one wants to pick up the phone anymore.”

About that application: Dai said he wants to limit the initial membership to around 295 people in the three launch cities of New York, San Francisco and Los Angeles. [Update: While those three cities are the initial target markets for members, Dai said the perks can be used “by almost anyone no matter where you live.”] He hopes to bring in more people eventually, but at first, having thousands of members would “dilute the experience,” particularly since some of the benefits (like access to celeb-hosted parties) don’t really scale.

At the same time, Dai said the application is “not about income or job title.” Instead, he sees the service as appealing to the same audience of “young professionals or millennial hustlers” as Hooch itself. So the application is focused on your bigger ambitions and “how hard you want to work to get there.”

Dai also noted that Hooch’s current membership is roughly even between men and women, something he’s hoping to continue with Hooch Black.

“We want to build a very inclusive community,” he added. “The primary criteria is, I would say, aspiration. We’re not just catering to a specific income level or race or gender.”