Alphabet, Google’s parent company, reported another pretty solid beat this afternoon for its first quarter as it more or less has continued to keep its business growing substantially — and is growing even faster than it was a year ago today.

Once again, Alphabet’s “other bets” — its fringe projects like autonomous vehicles and balloons — showed some additional health as that revenue grew while the losses shrank. That’s a good sign as it looks to explore options beyond search, but in the end it still represents a tiny fraction of Google’s overall business. This was also the first quarter that Google is reporting its results following a settlement with Uber, where it received a slice of the company as it ended a spat between its Waymo self-driving division and Uber.

In the end, it’s a beat compared to what Wall Street wanted, and it’s getting a very Google-y response. Investors were looking for earnings of $9.35 per share on $30.36 billion in revenue. Google’s stock is up around 2% in extended trading, which for Google is adding more than $10 billion in value as it races alongside Microsoft and Amazon to chase Apple as the most valuable company in the world by market cap. Google jumped as much as 5% in extended trading, though it’s flattened out

Google’s traffic acquisition cost, or TAC, appears to also remain stable as a percentage of its revenue. This is a little bit of a sticking point for observers for the company and a potential negative signal for investors as more and more web browsing shifts to mobile. It’s ticked up very slowly over the past several years, but is now sitting at around 24% of its total revenue. 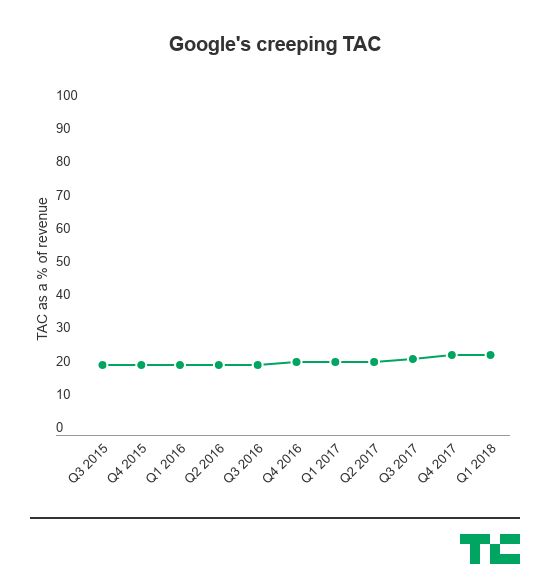 Google, at its core, is an advertising company that is going to make money off its billions of users across all of its properties. But as everything goes to mobile devices, the actual value of those ads is going to drop off over time simply because mobile browsing has a different set of behaviors. Google’s business has always been to offset that cost-per-click with a growing number of impressions — and, indeed, it seems like the status quo is sticking around for this one. 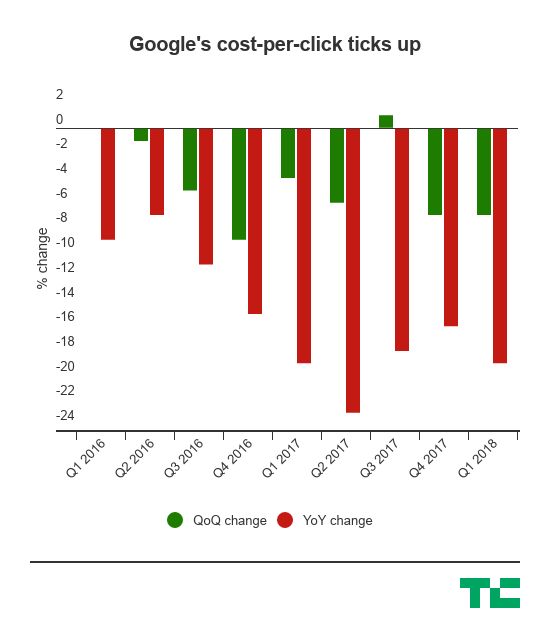 While Google’s advertising business continues to chug along, that diversification of revenue streams is going to be increasingly important for the company as a hedge against any potential threats to its advertising income. Already there is some chaos when it comes to what’s happening with user data following a massive scandal where information on as many as 87 million Facebook users ended up with a political research firm, Cambridge Analytica. That backlash centered around user privacy may end up tapping Google, which dominates most of how information travels across the web with Gmail and Search among its other products.

But that still comes at a pretty significant cost. It’s made major investments into tools like Google Cloud (or GCP), but tucked into the earnings report is a line item that shows its “purchases of property and equipment” more than doubled year-over-year to around $7.3 billion, up from $2.5 billion in the first quarter this year. Of course this can encompass a ton of things, but Google still has to actually buy servers if it’s going to run a cloud platform that can compete with AWS or Microsoft’s Azure.

All that feeds into its “other income” stream, which grew from $3.2 billion in Q1 last year to $4.35 billion in the first quarter this year. Amazon’s cloud business is already more than a $10 billion business annually, and that first-mover advantage has served it well as it began a huge shift to how businesses operate on cloud servers. But it also exposed a massive business opportunity for Google, which continues to invest in that.