Watchmaker Jaquet Droz announced its Signing Machine — a mechanical device that will sign your name for you using a series of miniature gears and springs — in 2014. Four years later, the company is ready to ship their miraculous contraption just in time for you to ink the deal you’ve made with Cybereus, lord of the digital underworld.

This exquisitely baroque gadget is essentially a little cartridge full of clockwork. You wind it up, stick a pencil in its tiny retractable claw, and let it go. The gears and levers recreate your signature with a series of flowing strokes generated by the movement of the gears.

Droz, an 18th century watchmaker and automaton manufacturer, was famous for his miraculous contraptions, including a Draughtsman and Writer, two human-shaped robots that could draw and write, along with his beautiful singing birds that used tiny pipes and bellows to recreate birdsong.

The Signing Machine is activated after you enter your four-digit code into the the device, and each unit is individually decorated for the owner.

How much does this bit of titanium jimcrackery cost? It starts at $367,500 and goes up depending on your signature. Too much? Just remember: Making deals with the cryptodemons of the digital underworld isn’t cheap. You’ll need something like this oddly tactical piece of metal to truly widen their hooded, red-shining eyes. 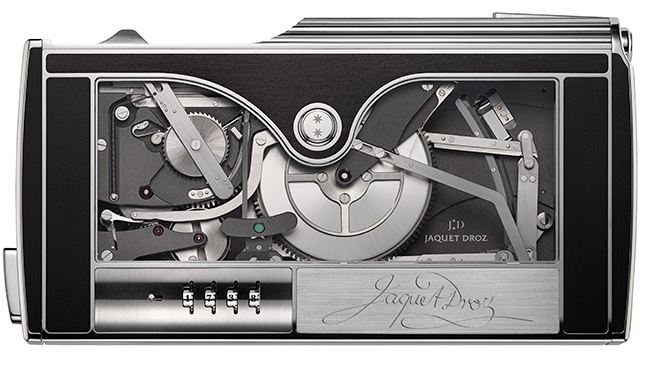