At a time when web users are becoming more concerned about their online privacy and personal data, Mozilla today is launching a new version of its Firefox for iOS web browser that includes Tracking Protection turned on by default. That means when you use the browser, websites won’t be able to track your activity and capture your personal information, unless you explicitly allow a given site to have that ability.

The feature was previously available in Firefox for iOS, but users would have to turn it on for themselves. Now, it’s on by default, Mozilla says, whether the browser is used in Regular mode or set to Private Browsing mode. The latter is the even more private mode which includes both automatic ad and content blocking, and doesn’t keep a history of visited sites.

Firefox’s Tracking Protection is based on the same technology that blocks ads, analytics and social media tracking that’s also used by th Firefox Focus content blocker on Android and iOS, as well as in Firefox for Desktop and Firefox for Android. And its rules about trackers are based on the Disconnect blocklist, which has a specific definition of tracking that’s aimed at protecting individual users’ data from being collection across multiple websites and then retained. 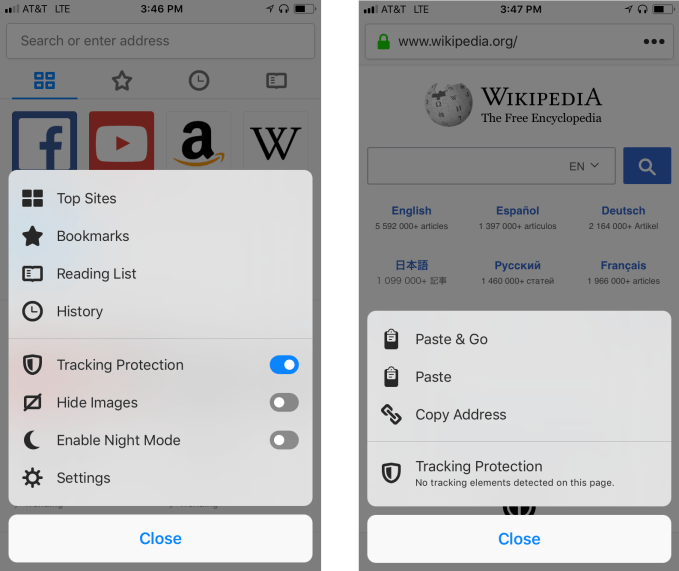 Mozilla says it made the decision to make Tracking Protection the default in response to users’ increased concerns over data privacy.

“At Mozilla we’ve always believed it’s important to respect people’s’ privacy and give them the control to decide which information they want to share, and what information they don’t. Now more than ever consumers are demanding this from the companies with whom they share their data,” says Mozilla, in its announcement about the launch.

Of course, turning on Tracking Protection has another benefit, too. When websites aren’t bogged down with tracking scripts, they tend to load faster. And with better-performing, faster-loading websites, users will also save on mobile data and not drain their battery as quickly.

The change to Tracking Protection is the most notable feature arriving in the latest version of Firefox for iOS, but it’s not the only one. The browser will now also allow iPad users to re-order their tabs, introduces more keyboard shortcuts, and supports drag-and-drop of links between Firefox and other apps.

While Mozilla says the updated version of the Firefox for iOS app is rolling out today, we downloaded the app to a new device and found that Tracking Protection wasn’t yet enabled by default. That’s likely because the updated app is still propagating its way across the App Store, given Mozilla only announced the news about the launch an hour ago.

To see if you’ve got the option switched on, just visit the app’s Settings.

You can download the updated Firefox for iOS here.