You’ll soon be able to draw on the world around you and shoot back-and-forth Instagram Boomerang GIFs with the Facebook Camera. Bringing additional creative tools to the Facebook Camera could make it a more popular place to shoot content and help the company compete with Snapchat.

“We wanted to give people an easy way to create with augmented reality and draw in the world around them” says John Barnett, a Facebook Camera Product Manager about the feature it calls “3D drawing”. It’s rolling out to users over the coming weeks. Matt Navarra first spotted the features.

With AR drawing, you can scribble on the world around you, then move your camera and see the markings stay in place. It’s a fun way to add graffiti that only exists inside your screen. You can add the drawings before or while you’re recording, allowing you to draw on something out of frame, then pan or unzoom to reveal it. Facebook will eventually add more brushes beyond the pastel gradient colors seen here.

Facebook tells me the technology understands the corners and objects in the room to create a 3D spec. Facebook could that use that to detect surfaces like walls and tables to wrap the drawing onto them. Currently, it only does that when it’s confident about the object recognition, such as in optimal light conditions.

Since drawing is a universal language, the feature could make AR easy to use for younger users and Internet novices. Facebook launched its AR effects at F8 last April, and has recently added AR tracker target experiences that are triggered by real-world posters or QR codes. It all started with the company acquiring fledgling AR masks startup MSQRD in 2016. 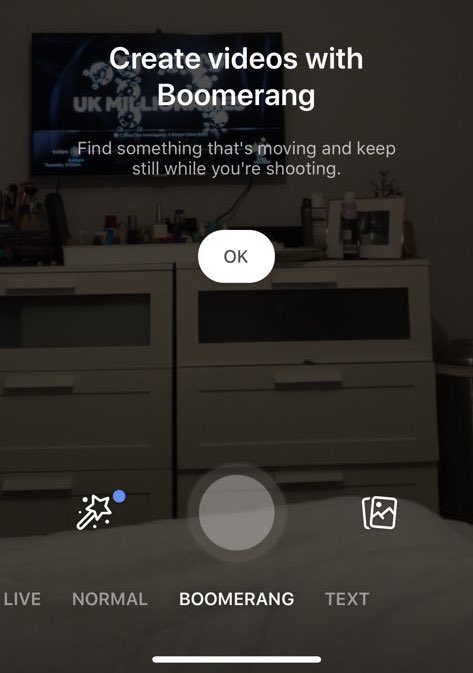 Facebook added looping GIF creation to the Facebook Camera a year ago, but those can feel a bit jarring since they start back at the beginning once they end. Some users no longer have that GIF option, so it’s potentially being replaced by Boomerang’s established brand and more silky back-and-forth animated video clips. Facebook confirms that this feature is now rolling out to the Facebook Camera.

As we reported last week, Facebook is determined to make Stories work. Despite the criticism of it being a rip-off of Snapchat and redundant given Instagram Stories, Facebook is trying new ways to make Stories more popular an accessible. That includes tests of Stories as the default destination for content shot with the Facebook Camera, showing bigger tiles with previews of Stories atop the News Feed, and showing a camera and camera roll preview window when you open the status composer. Those, combined with these new features, could give Facebook Stories a boost in utility and visibility.

Facebook believes social media is on an inevitable journey from text to photos to videos to Stories equipped with augmented reality. Since Snapchat refused its acquisition offers, Facebook is now on a quest to evolve into an AR company rather than having to buy a big one. It remains to be seen whether users think AR is a novelty or a core utility, but Facebook won’t wait to find out.

3 tests show Facebook is determined to make Stories the default