Entrepreneurs have it rough in Africa, India, Pakistan — places where VC cash doesn’t fall from the sky and necessary infrastructure like reliable banking and broadband can be hard to come by. But companies grow and thrive nevertheless in these rugged environments, and DFS Lab is an incubator focused on connecting them with the resources they need to go global.

The company was founded, and funded, on the back of a $4.8 million grant from the Gates Foundation, which of course is deeply concerned with tech-based solutions for well-being all over the world. Its name, Digital Financial Services Lab, indicates its area of focus: fintech. And anyone can tell you that sub-Saharan Africa is one of the most interesting places in the world for that.

This week DFS Lab is announcing a handful of new investments — modest ones on the scale companies are used to in Silicon Valley, but the money is only a small part of the equation. Investment comes at the end of a longer process, the most valuable of which may be the week-long sprint DFS Lab does on the ground, helping solidify ideas into products, or niche products into products at scale.

The relative lack of VCs and angel investors puts early-stage companies at risk and can discourage the most motivated entrepreneur, so the program is aimed at getting them over the hump and connected to a network of peers.

The latest round puts a total of $200,000 into four startups, each touching on a different aspect of a region or vertical’s financial needs. All, however, are largely driven by the massive growth of mobile money in Africa over the last decade and the more recent, ongoing transition to modern smartphones and the app/data landscape familiar to the U.S. and Europe.

The fourth company is choosing to remain in stealth mode for now, but you see the general theme here.

For one reason or another there are major gaps in everyday services that many of us take for granted — the ability to prove one’s identity, for example, is critical but commonly absent. I talked with Paul Damalie, founder of a DFS-funded company called Inclusive that helps address that particular shortcoming.

Basic ID verification can be difficult when you remove many of the things we take for granted. So when, for example, someone wanted to get a loan, a savings account, or some other basic financial service, “Originally you’d have to literally walk into the bank to do it,” Damalie said. Needless to say that isn’t always convenient, and banks as well as users want better options.

“We’ve been collecting existing databases and building a layer of rich access around it,” he continued. “Now we can use facial recognition to check those details. Once you have the ID, you need to check it with the government records” — which Inclusive also does. A range of other data creates a confidence score in the person’s identity, helping avoid identity fraud. 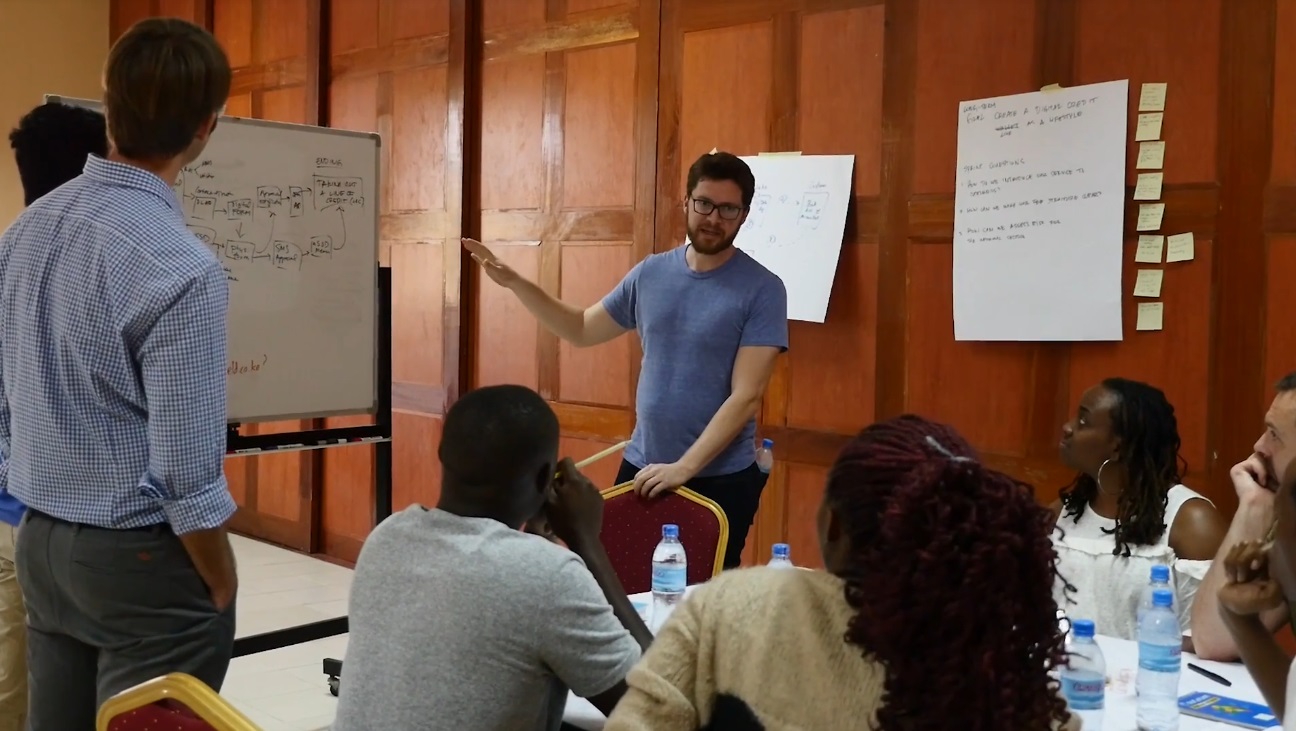 Another opportunity arises not from these gaps but from the unique ways in which the African ecosystem has evolved. USSD, which I mentioned before, is probably unknown to many of our readers — it certainly was to me. But it’s become a standard tool used regularly by millions for important tasks in Africa; if you want to work in that market, you have to deal with USSD one way or another.

The problem is that, as you might guess from Nala trying to deprecate it, USSD is a technology dating back to the ’90s, a text-based interface that’s rudimentary but, much like SMS, universally accepted and intelligible. The importance of cross-platform compatibility in mobile markets as fragmented as these can’t be overstated.

So bridging the gap between USSD and a “traditional” (as we might call it) payment app is a unique opportunity, and one a company called Hover (also in the DFS Lab portfolio) is addressing. Its tech acts as a sort of translation layer between USSD and smartphone app interfaces, allowing for modern app design but also deep back-compatibility. It’s an opportunity specific to this time and this area of the world, but nevertheless one that may end up touching millions.

And from the narrowness of its vision that DFS Lab derives its effectiveness.

“They’re one of the most specialized accelerators in the world,” said Damalie. “It goes beyond just funding — it involves having the right kind of network: access to partners, data, sources across the continent. They had context-relevant fellows, people who had very specific challenges.”

“The grant was useful and let us build a proof of concept, and of course the Gates Foundation gives us credibility. But they were taking bets on us as individuals.”

Although DFS Lab has heretofore been funded by the Gates infusion, that well will run dry soon. Jake Kendall, DFS Lab’s executive director, indicated that the plan is to move towards a more traditional investor fund. They already focus on profitability and the potential for growth to the continental stage or beyond; this isn’t a charity but tactical investment in such a way that social good is a necessary byproduct.

“The best way to have a global impact is to be self-sustaining,” he said.