As part of Twitter’s efforts to rid its platform of abuse and hate, the company is teaming up with researchers Susan Benesch, a faculty associate at the Berkman Klein Center for Internet & Society at Harvard University, and J. Nathan Matias, a post-doc research associate at Princeton University, to study online abuse. Today, Twitter is going to start testing an idea that if it shows people its rules, behavior will improve. 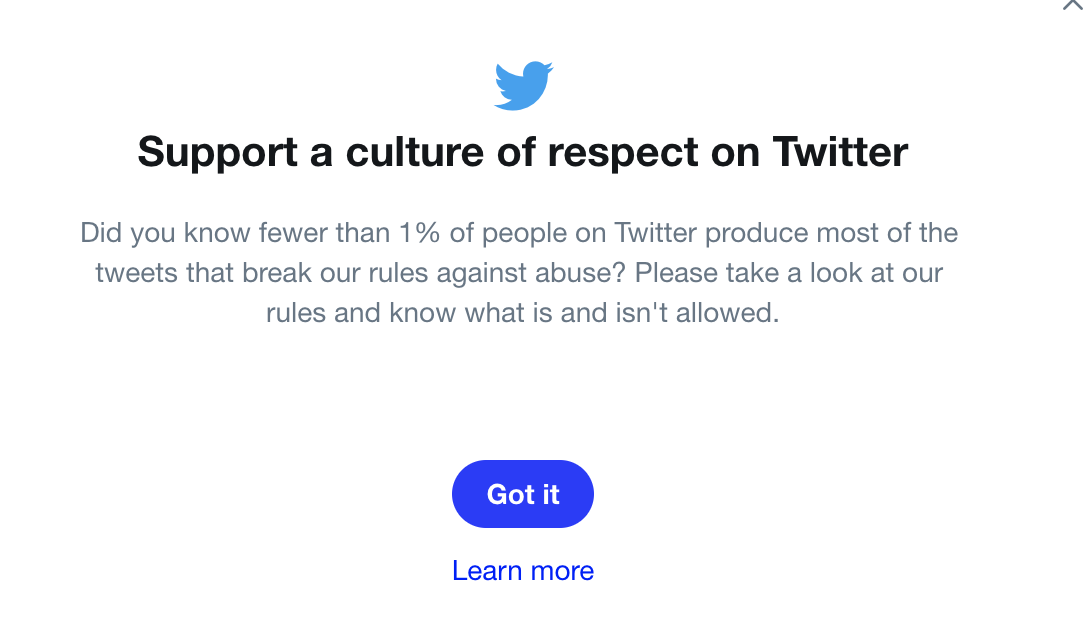 Via TechCrunch. This appeared at the top of one user’s Notifications tab.

“In an experiment starting today, Twitter is publicizing its rules, to test whether this improves civility,” Benesch and Matias wrote on Medium. “We proposed this idea to Twitter and designed an experiment to evaluate it.”

The idea is that by showing people the rules, their behavior will improve on the platform. The researchers point to evidence of when institutions clearly publish rules, people are more likely to follow them.

Launching a new study today with @SusanBenesch and @dangerousspeech to help diminish abuse on Twitter. It’s a simple idea, and we have an open and accountable way to share the findings. https://t.co/aH2KCWJiRd

“Since we will not receive identifying information on any individual person or Twitter account, we cannot and will not mention anyone or their Tweets in our publications,” the researchers wrote.

Last month, Twitter began soliciting proposals from the public to help the social network capture, measure and evaluate healthy interactions on the platform. This was part of Twitter’s commitment “to help increase the collective health, openness, and civility of public conversation,” Twitter CEO Jack Dorsey said in a tweet.

It’s not clear how widespread the test will be, but it seems that the company won’t be releasing specifics.

Hi Megan, thanks for asking! This study is in the U.S.. To preserve the integrity of the results, we can't yet disclose the number until afterward. We did do statistics to minimize the number of people involved, and our ethics boards reviewed that number.

“We’re collaborating with a group of academic researchers and scholars led by Susan Benesch, J. Nathan Matias, and Derek Ruths on an initiative to remind people of the Twitter Rules, to evaluate whether increased awareness of our policies results in improved behavior and more respect on Twitter,” a Twitter spokesperson said in a statement.