No matter what cloud you build on, if you want to build something that’s highly available, you’re always going to opt to put your applications and data in at least two physically separated regions. Otherwise, if a region goes down, your app goes down, too. All of the big clouds also offer a concept called ‘availability zones’ in their regions to offer developers the option to host their applications in two separate data centers in the same zone for a bit of extra resilience. All big clouds, that is, except for Azure, which is only launching its availability zones feature into general availability today after first announcing a beta last September.

Ahead of today’s launch, Julia White, Microsoft’s corporate VP for Azure, told me that the company’s design philosophy behind its data center network was always about servicing commercial customers with the widest possible range of regions to allow them to be close to their customers and to comply with local data sovereignty and privacy laws. That’s one of the reasons why Azure today offers more regions than any of its competitors, with 38 generally available regions and 12 announced ones. 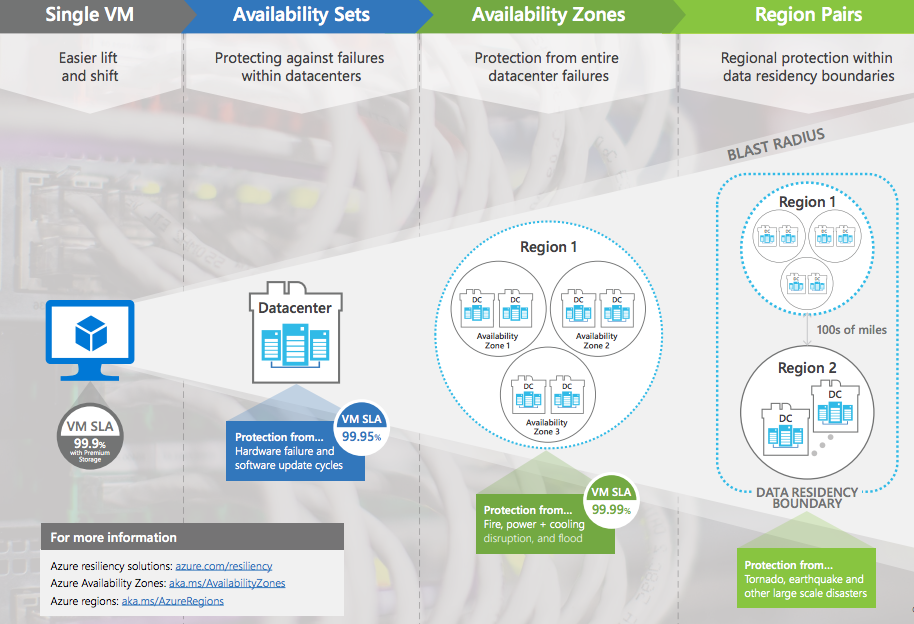 “Microsoft started its infrastructure approach focused on enterprise organizations and built lots of regions because of that,” White said. “We didn’t pick this regional approach because it’s easy or because it’s simple, but because we believe this is what our customers really want.”

Every availability zone has its own network connection and power backup, so if one zone in a region goes down, the others should remain unaffected. A regional disaster could shut down all of the zones in a single region, though, so most business will surely want to keep their data in at least one additional region.