For most companies, the Ionic would have felt like a disappointment. For Fitbit, it was something more. It wasn’t just a fully realized piece of hardware running undercooked software, it was the basket into which the company seemed to have placed all of its eggs.

The company’s first official smartwatch was the product of a startup shopping spree that included Pebble, Coin and Vector, and CEO James Park exuded confidence that it would be precisely what the company needed to get back on track after a few years of financial fumbling. It was a lot to put on a single product, and perhaps the whole thing just buckled under the weight.

When the company revealed the Versa last week, I called the device “the smartwatch the Ionic should have been.” After several days and nights of wearing on my wrist, I stand by that comment. It’s still far from perfect, and the company clearly has some important mountains to climb before the company has any real shot of challenging the Apple Watch’s throne, but the Versa feels like a welcome do-over, and is exactly the kind of watch the company ought to have released in the first place. 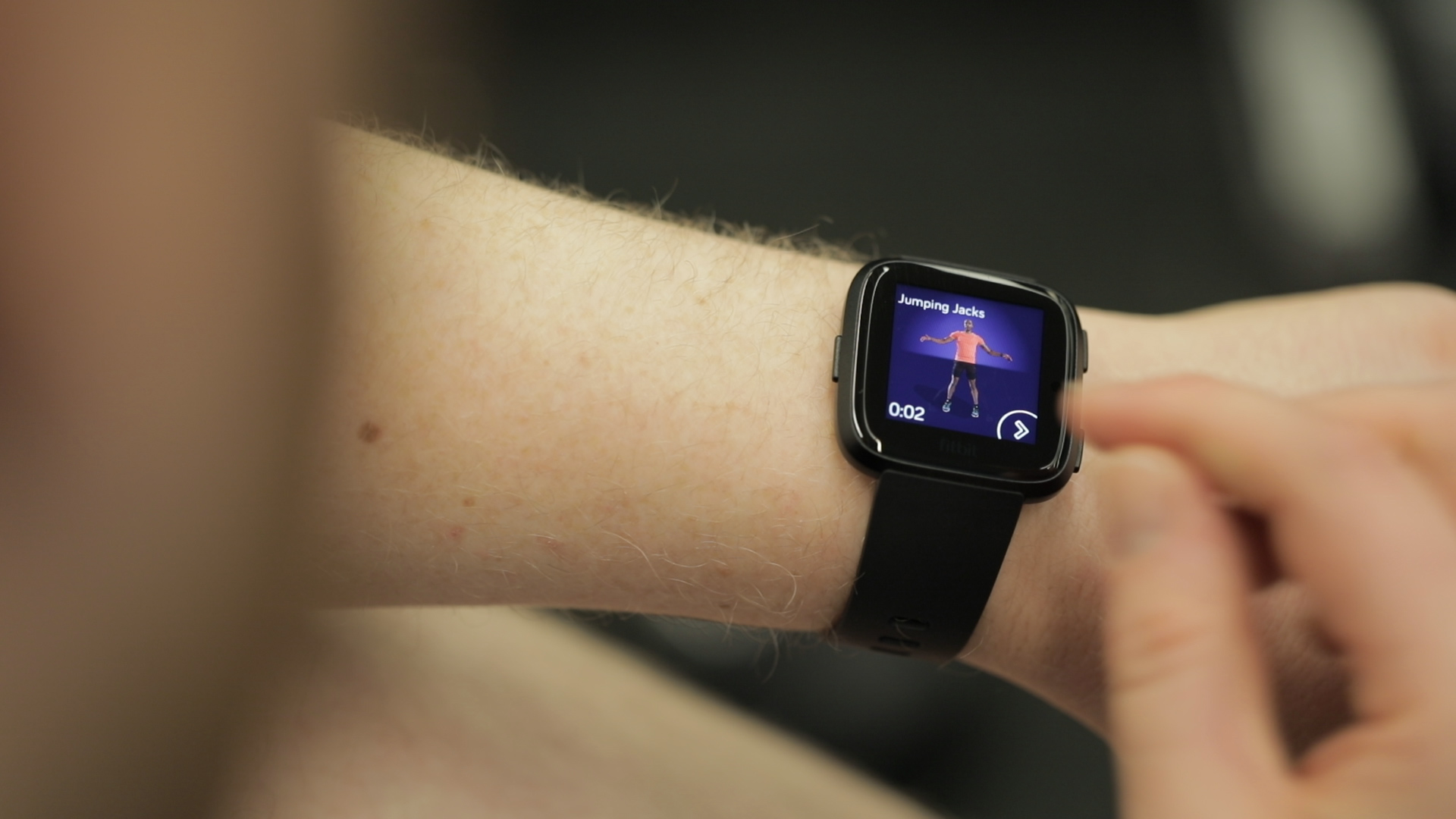 It never ceases to amaze how little thought some companies appear to put into the wearability of their wearables. I mean, it’s right there in the name folks, product designed to be worn on the human body all day — and, in many cases, all night. That the Ionic was big and ugly was baffling for any number of reasons, not the least of which is the fact that the company bought Pebble.

Sure, Fitbit’s been making its own hardware for years now, and I can totally empathize with the desire to put one’s own stamp on the product, in an attempt to differentiate it right out of the gate. But Pebble was one of the most important innovators in the smartwatch space, and the company delivered consistently interesting product design, generation after generation.

Shortly before the Ionic was announced, Park told me that the company had essentially acquired Pebble so Fitbit could build its own smartwatch app store. The company, it seemed, had no interest in the hardware side of things — that much seemed clear with one look at the Ionic. I recognize that the Versa has been in the works for some time now, but the watch really does feel like a response to all of those who wondered aloud why the company didn’t take design cues from the company it required. 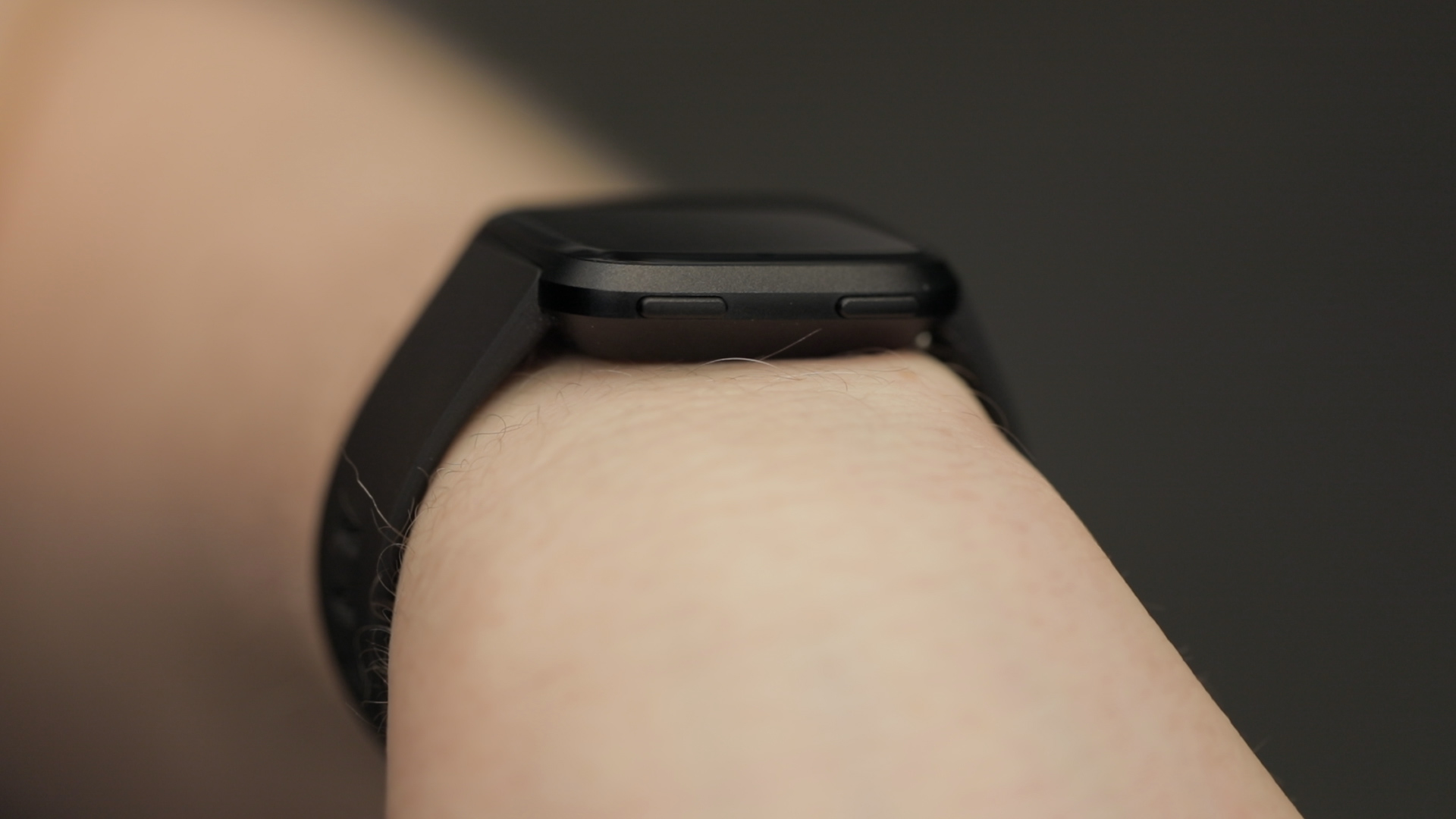 From a pure hardware design perspective, the Versa really does feel like the smartwatch Pebble would have made in 2018. When the company showed us the product for the first time at an event in New York, they went into the design philosophy around why the product ended up in the shape it did. I’ll spare you the specifics, but the long and short of it is that round watches are a relic of analog time keeping. The display is square more or the less for the same reason your laptop and tablet have a square (okay, fine, rectangular) display.

The company calls the shape of case design a “squircle” — which, I was actually surprised to find, is apparently a legitimate geometric term. The case is thin and light, as advertised — notably when placed up against the Apple Watch. It’s made of metal, but it’s light enough to fool you into believing it isn’t, which means it doesn’t have quite as much of a premium feel as Apple’s device.

The front also sports some pretty massive bezels, seemingly another holdover from the Pebble days. The case is shorter, but significantly wider than the larger Apple Watch model. That means it will fit on a lot more wrists than its predecessors — a smart move on Fitbit’s part, given how the company blocked out a wide potential user base the last time around. Even so, the company may want to consider moving toward two sizes for the next generation product. Choice would go a long way as the company works to appeal to a broader range of users.

The interface is basically unchanged since the Ionic. No surprise there — the Versa arrives about half a year after the Ionic. Fitbit’s watch OS is pretty bare-bones, from a design perspective, but that’s fine. The icons are big and bright, laid out on a grid, four per screen. It’s all very utilitarian — though it does require a lot of swiping or button pressing, given that there’s no spinning crown or watch bezel for navigation like you find on Apple and Samsung offerings, respectively.

While the Versa is quite as fitness-centric as the Ionic, it’s still a centerpiece. No surprise there, of course — even Apple has readily admitted that fitness is the primary driver in purchasing the company’s wearable, and Fitbit certainly has the right foundation to deliver on that front. The default watch face offers your step count for the day, along with easy access to your heart rate and calories burned.

A swipe up from there shows your daily numbers in a row, along with some fitness tips, while a swipe to the left shows the first row of app icons, with Exercise out front. Clicking that little running guy will pop up a series of pre-programmed exercises for more accurate activity tracking.

The first page also features Coach, which offers up a handful of quick (five to 15 minute) workouts for strengthening your abs and such. The workouts feature a simple animation of a person performing the exercise, but given the small, low-res screen, you’re really better off using the company’s guided coaching on your phone. 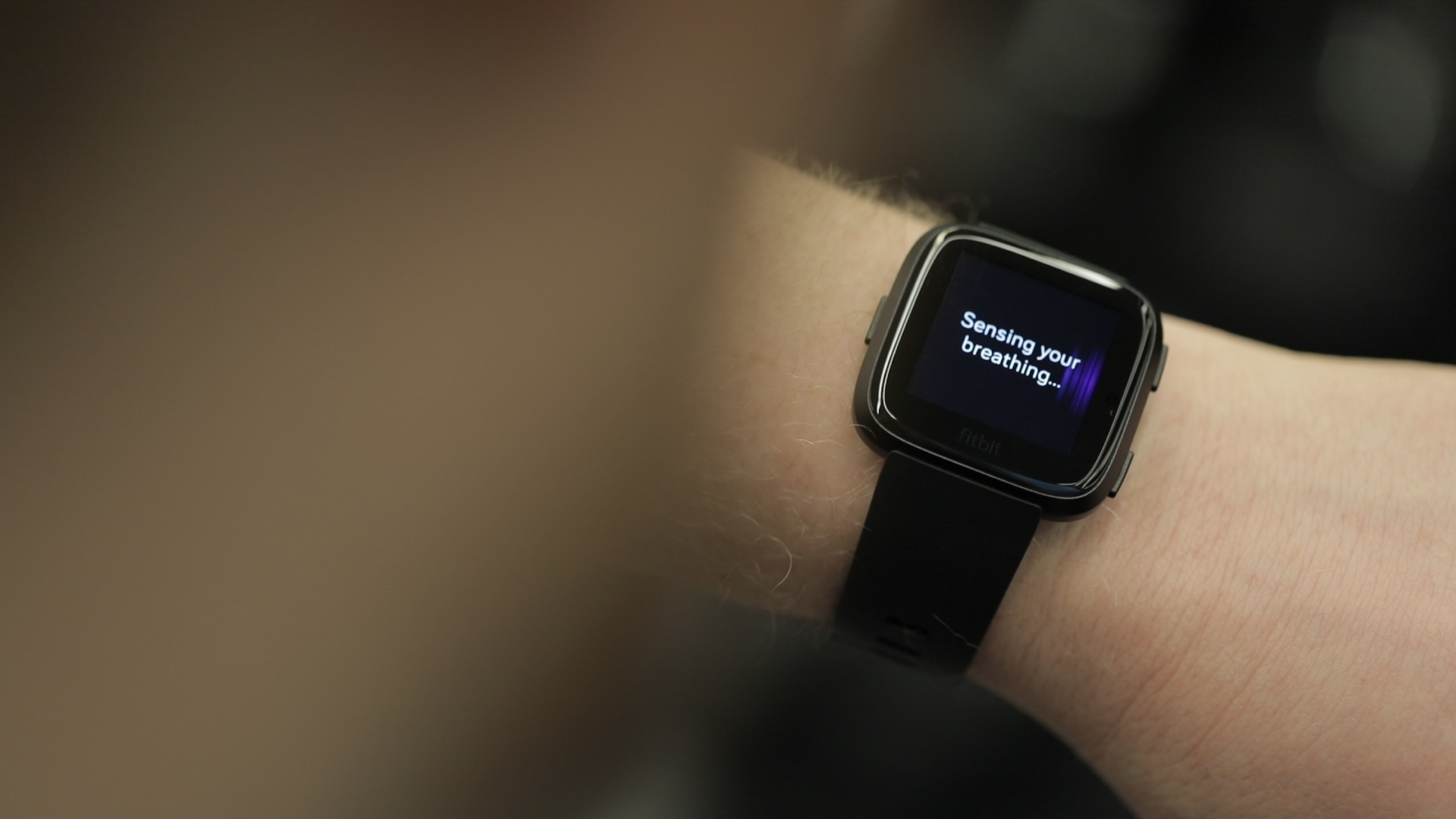 The biggest update on the software side, however, is the addition of some friggin’ apps. For all the talk of buying Pebble for app store and development purposes, that was a mile-wide blindspot for the Ionic. After all, the inclusion of third-party apps is the thing that officially made the product a smartwatch. A few months after the Ionic’s release, Fitbit announced 60 additional apps for the device and a boatload of watch faces.

Of course, there’s still a lot of catching up to do with the competition, but it’s a start. Some, like Uber/Lyft and The New York Times, are genuinely useful. For music, the company has Pandora and Deezer — both of which have their user base, but they ultimately make the lack of a Spotify offering that much more glaring. At the very least, Fitbit’s proven it’s committed to growing the selection, going forward.

The not special edition 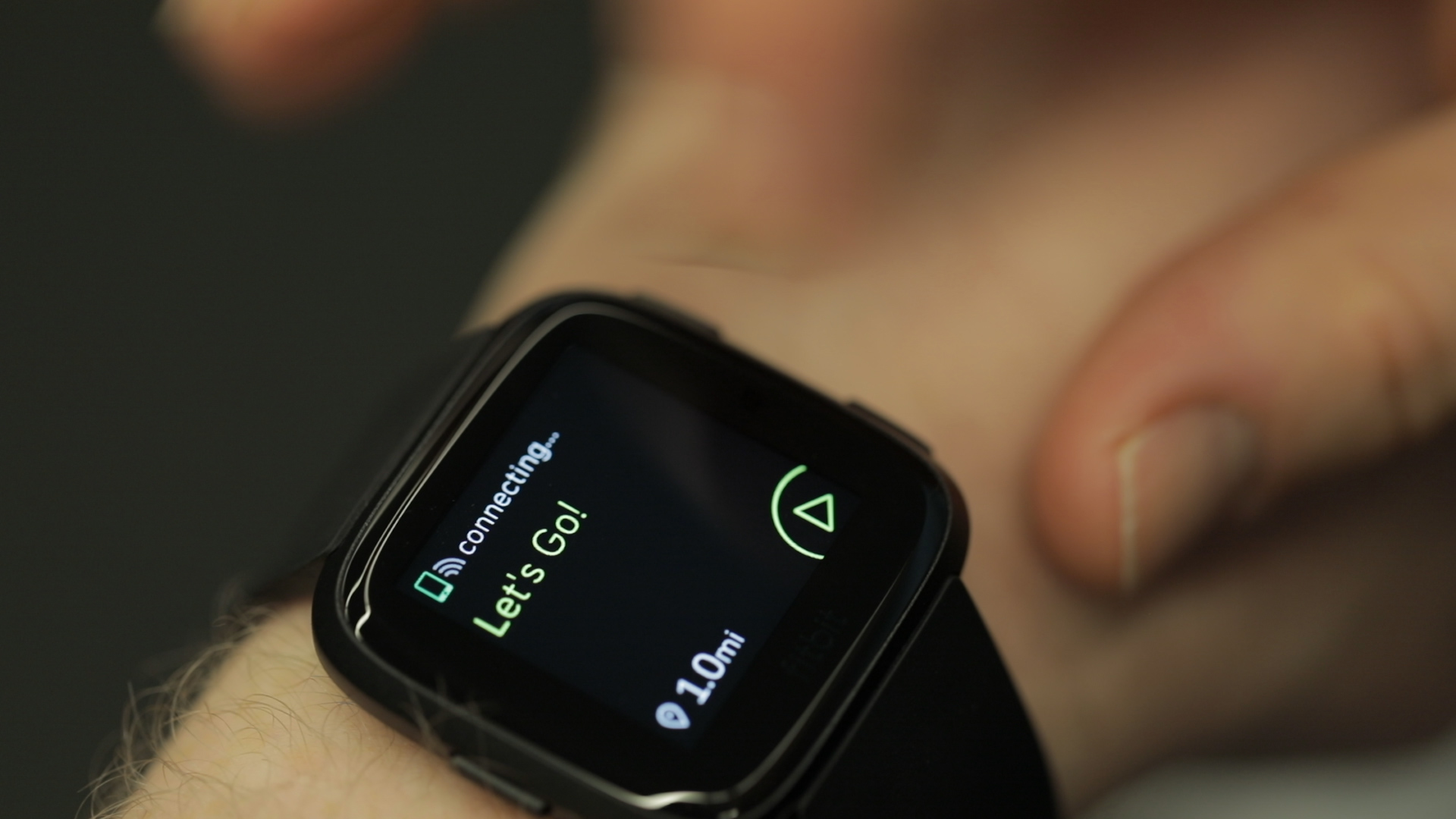 And, of course, there’s the Starbucks app — though anything that uses direct payment is a bit of a moot point, since there’s no NFC on the standard Versa model here in the States. That was clearly a cost-cutting measure, but if paying with your wrist is important to you, you can shell out the additional $30 for the “special edition.”

The other key feature missing from the Versa is GPS. You can still do tracking when hooked up to the GPS on your handset, but dropping it from Versa hardware means the watch is less appealing as a standalone tracker. Ditto for NFC.

There is so storage for music (only 2.5GB of the on-board 4GB, mind), but on a whole, this isn’t the device for people who want to go on a run without their phone. That, Fitbit, will happily tell you, is a job for the Ionic — assuming, of course you want to pay $100 more for the privilege. 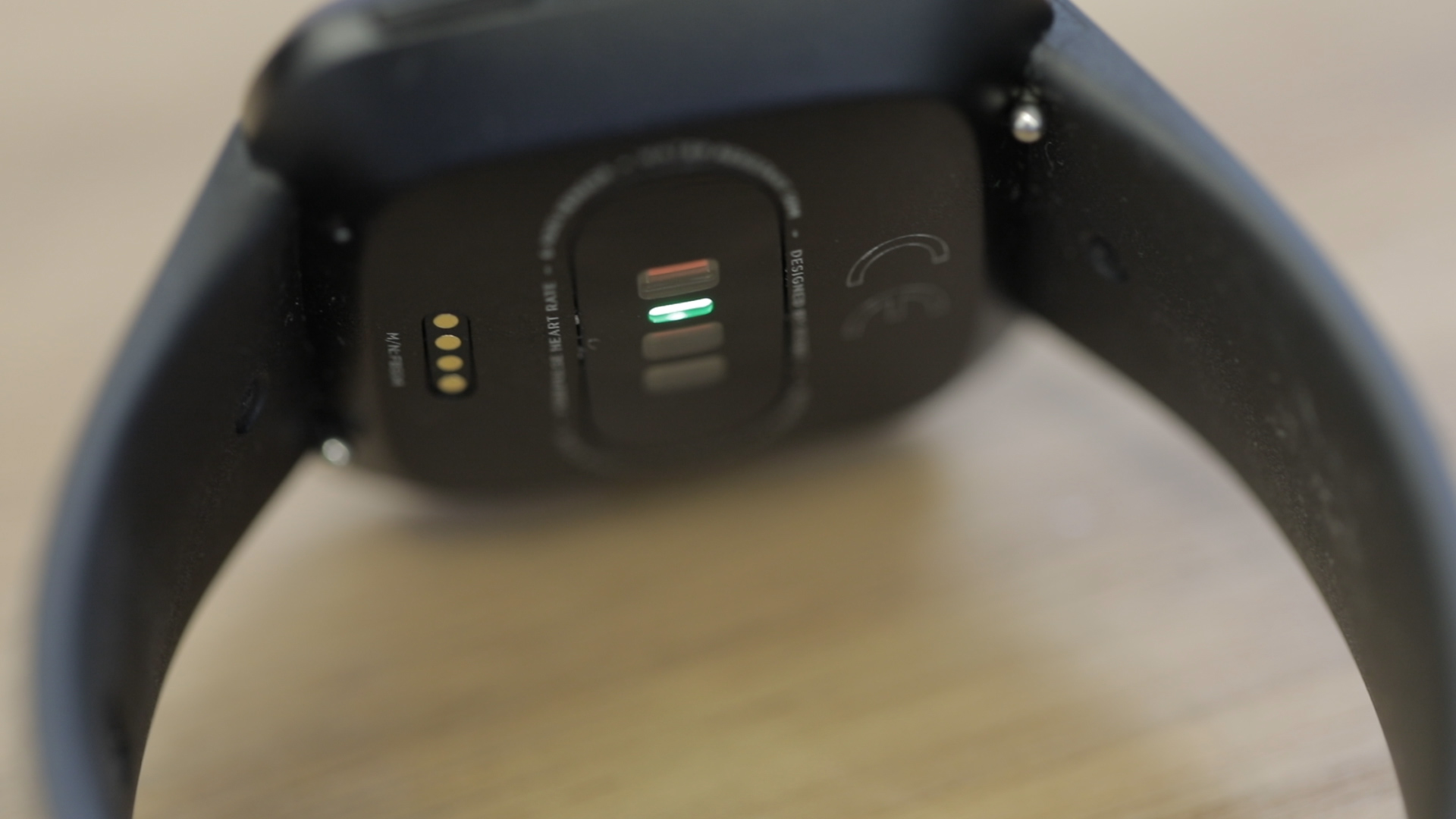 In our interview ahead of the Versa announcement, Park was very candid about the fact that the Ionic didn’t sell as well as the company had hoped. Perhaps the Versa simple wasn’t ready in time, but this device really ought to have been the one Fitbit lead with. It’s imperfect, but it addresses a number of the key issues many, myself included, had with the Ionic. It fits and looks better, has a more robust app selection and, at $199, it’s pretty nicely priced.

Like the Ionic, this isn’t the device that’s going to turn around Fitbit’s fortunes once and for all — a fact the company seems keenly aware of as it pivots a big chunk of its business to the professional health sector. But it does feel like precisely the kind of smartwatch Fitbit should have made all along.