Online gamers love to talk a big game, but how willing are they to put their money with their mouth is? Players Lounge is a home for gamers looking to make friendly wagers with strangers and friends in head-to-head matches.

When we first covered the startup back in 2015, the team was getting people together at bars in New York for one-off FIFA tournaments on slow nights. Since then, Players Lounge has moved towards greater scalability, though their niche has still centered heavily on sports titles like FIFA and Madden. The company is launching out of Y Combinator’s latest class with some new funding and some new plans to capture gamers’ attention.

The company is already expanding beyond its console sports roots, and has added support for titles like Fortnite and Call of Duty, though there’s still a lot of room for the company to flex on PC which hosts some of the most devoted gamers.

After connecting their gaming accounts, users load cash onto the platform via credit card, PayPal or Bitcoin and can use the funds to enter into head-to-head wagers. The company takes 10 percent of wagers. Bets can range from $2.50 to $500. When it comes to legality, because eSports are considered a game of skill in most states, Players Lounge can operate without a hitch. A few states still don’t allow it though, so if players are in Arizona, Iowa, Louisiana or North Dakota, they won’t be able to make wagers on the site. 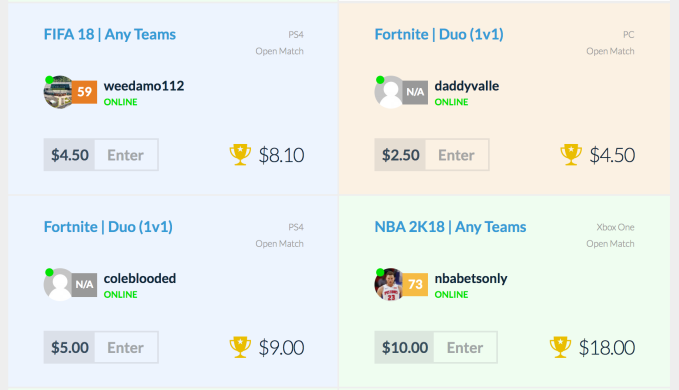 One of the biggest issues with online gameplay is matching users of similar skillsets to each other. No one wants to get thrown into a match with a professional eSports player when they barely know what they’re doing. Players Lounge has its own rating system to independently determine someone’s skills as a gamer on a 100-point scale so that users can match themselves up for head-to-head battles accordingly before they pony up a wager.

When money comes into play, gaming can understandably turn ugly. Add in the largely anonymous quality that comes from just knowing someone by their user name and you’re left with a platform ripe for abuse. Players Lounge hasn’t been shy about bringing down the ban hammer on users trying to game the system. In the future, it’s looking to mandate the use of anti-cheating software for anyone on the platform.

The company is looking to add support for larger groups to go at it against each other rather than the current 1v1 wagers. As the company has added support to new titles, its revenues have grown 100 percent month-over-month for the past four months on an annualized run rate of $2 million, the company says. Users are also sticking around, the company says that 30 percent of users play another match within 12 weeks of playing their first game on the service.