It looks like someone found a practical use case for AR that’s not about trying on makeup or catching Pokémon. Ebay today introduced a new AR-powered feature that helps sellers figure out the best box to use for shipping their items to buyers. The technology works with a range of products, the company says, including everything from backpacks to kitchenware to automotive parts. It’s meant to help sellers save time by pointing them to the correct USPS Flat Rate shipping box for their items.

Ebay says this technology will helps seller skip a trip to their local post office looking for the right-sized box, and will provide real-time calculation of shipping costs.

The feature is one of the first to be built using Google’s new ARCore platform, and currently runs only on ARCore-enabled Android devices.

ARCore, which is Google’s answer to Apple’s ARKit, was publicly released in February, and is now available in its 1.0 release to over 100 million Android devices, including top smartphones like Pixel, Pixel XL, Pixel 2, Pixel 2 XL, Galaxy S8, S8+, Note8, S7 and S7 edge, LGE’s V30, V30+ (Android O only), ASUS Zenfone AR, OnePlus’s OnePlus 5, and others.

Ebay’s AR shipping feature also takes advantage of concurrent odometry and mapping to understand the phone’s position, and sensors for movement and orientation, the company notes. 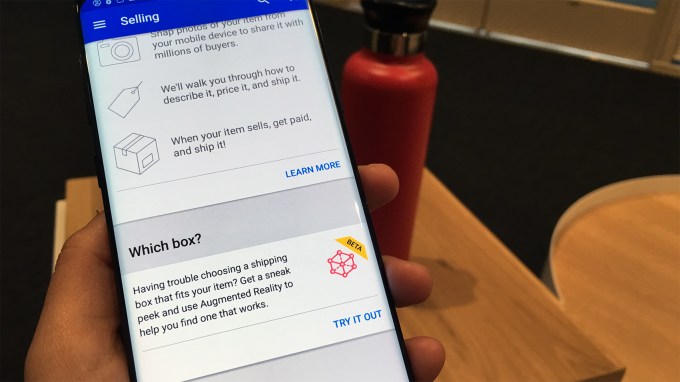 To use the feature in the eBay mobile app for Android, you open the app and tap “Selling” followed by “Which Box?” The app will instruct you to place the item on a non-reflective flat surface, like a table or floor. You then “try on” virtual boxes around the item, to see which one fits best – leaving room for extra padding if the item is fragile, of course.

With the box overlaid on the item, you can change to the angle to look down on the box from the top, look on the sides and the back to see if the item is fitting all the way around.

Ebay says the AR shipping feature, which was built during the company’s annual hack week, is only one of several new AR experiences it has in the works this year. We’re told that an iOS version of this feature is also in the works, but the timing and feature set is still to be determined. 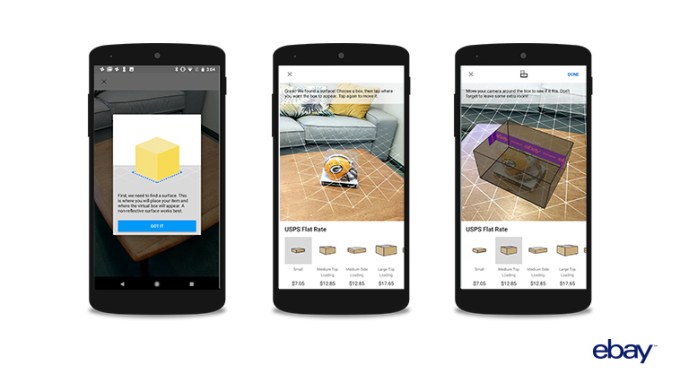