Funding for Southeast Asia’s car trading platforms is like buses. After a long wait without news, a third startup has raised funding in the space of a month.

Carsome, a Malaysia-based company that also operates in Singapore, Indonesia and Thailand, announced today it has raised a $19 million Series B round just weeks after smaller rivals BeliMobilGue and Rocket Internet’s Carmudi also grabbed money from investors.

This new Carsome raise is matched only by iCar Asia, an Australia-listed company started by Malaysia venture builder Catcha which raised $19 million last year, however Carsome’s model is different because it only sells to professional car dealers rather than facilitating consumer-to-consumer trades.

CEO Eric Cheng told TechCrunch that the startup was original a price comparison site for autos when it launched in 2015, but within six months it switched it focused to enabling consumers to easily sell their vehicle and dealers to pick up used-vehicles via the web. Carsome uses an online auction model to conduct sales, with prospective cars typically listed the day after they are submitted by consumers following a check-up conducted by the company’s staff.

That approach allows dealers to check in at a set time each day to look over the cars on offer, while the focus on vetting autos quickly — Carsome can dispatch vehicle checkers directly to a prospective seller’s home — means that consumers can quickly get a sale. The auction model adds competition and the potential for a seller to make more money than they originally anticipated. That’s a dynamic that is tricky to replicate in other static sale models, Cheng pointed out.

With dealers spread out across countries, especially in Indonesia, Cheng said services like Carsome can give more remote-based professionals an opportunity to add to their inventory without the inconvenience and cost of travel. 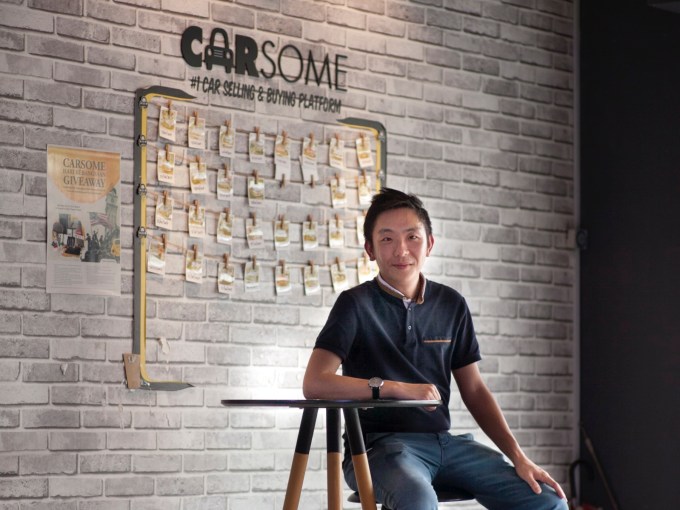 The new Series B funding was led by Burda Principal Investments, the VC arm of the German media firm that formally entered Southeast Asia last year, alongside existing backers Gobi Partners, InnoVen Capital and Lumia Capital. Cheng said the money will be deployed to grow the business in its existing markets with new hires and marketing pushes, but there are no plans for expansion at this point.

“In Malaysia, we are top on transaction volume, and we believe our numbers elsewhere are on par with the competition,” he said, declining to provide more specific information or business numbers.

Cheng said he estimates the used car business in Southeast Asia, which has a cumulative population of over 600 million people, to be worth some $30 billion per year despite immense fragmentation. With its new raise, Carsome will be hoping to zoom into pole position as the market becomes increasingly digital.

The startup had raised just over $8 million prior to today’s news, but Cheng said that recent news developments including SoftBank’s Vision Fund investment in Germany’s Auto1, and deals in China from Alibaba, Tencent and Didi Chuxing have helped put his industry on the map for investors.

“During the last three funding rounds, it was very hard to convince people that the used car industry is sexy, so thanks to SoftBank and [growing companies in] China,” he joked. “We have touch points with people in those communities and we can see that Southeast Asia is the next destination for some of these investors.”