RedDoorz, a budget hotel startup focused on Southeast Asia, has closed $11 million in new funding to expand its presence.

The three-year-old startup is a number offers a network of hotels that are grouped together under a single brand. The goal is a happy combination that marries the ubiquity of (typically) unorganized local guesthouse-style rooms with the more organized and efficient (but pricier) hotel option.

The result is a collection of rooms at various hotels that all adhere to a brand (in this case, RedDoorz) standard. If you’ve ever traveled in places like Southeast Asia, or found Airbnb’s quality to be lacking, then you’ll understand why guarantees around clean sheets, towels, reliable internet and breakfast are important. Likewise, the system also lets smaller guesthouses use the internet — RedDoorz’ website and app — to get new customers.

The concept was initially pioneered by India’s OYO Rooms, which is backed by SoftBank’s Vision Fund, but RedDoorz is one of half a dozen or so venture-backed efforts bringing the model to Southeast Asia. And, at this point, RedDoorz is probably the best funded of that Southeast Asia-based bunch.

The round is described as being pre-Series A and it comes from existing investors Sushquehanna International Group (SIG), World Bank’s IFC, InnoVen Capital and Jungle Ventures, with new investors DeepSky Capital, FengHe Group and Hendale Capital joining.

It’s a little tricky to track just how much money the startup has raised because a lot of it hasn’t been announced — CEO Amit Saberwal told TechCrunch he prefers to build a business rather than talk about doing so — but the company has also disclosed that it closed a $5 million Series A at the end of 2016. Initially, it closed a $1.4 million seed round and it added $1 million in venture debt last year.

Saberwal said this round is aimed at driving growth ahead of RedDoorz planned Series B, which he expects to close before the end of this year and to be anywhere from $25-$35 million. The company already has some impressive investors in Asia, so Saberwal is looking to see what kind of interest and experience it can attract from other parts of the world, mainly the U.S.. (That also explains why the embargo for this story was set to midnight Singapore time — hello, Silicon Valley 💸 .)

RedDoorz started out with a focus on Indonesia, Southeast Asia’s largest economy and the world’s fourth largest country with a population of over 250 million people. Saberwal said that was very deliberate.

“For the first 1.5 years we did nothing but focus on three cities in one market,” he explained. “When we go to know about the customers, how they tick, and what makes our partners happy, then we began expanding.”

The company then moved to the Philippines and Singapore and, in the case of the latter, it has recently opened its first leased property. So, while it works with existing hotel owners to essentially take over their property in terms of branding and marketing, the ‘RedDoorz’ hotel in Marine Parade Singapore gives it “full reign over the day-to-day operations.”

“Now it makes sense to go up the value chain and leasing our own property,” Saberwal told TechCrunch. “This will be our template to expand this model across the region. There are 65 rooms per day and, if we get this right, we will replicate it across the region.” 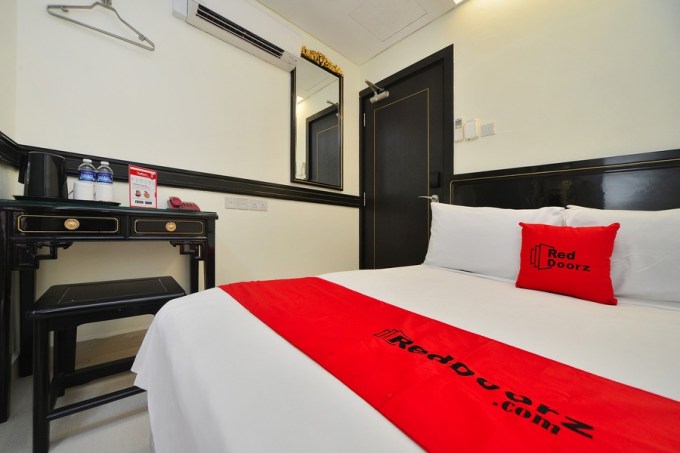 A promotional image from the fully-leased RedDoorz hotel in Singapore

That’s not to say that it will dispense with the existing model of taking over a third party hotel’s inventory, but this new approach offers a different price point to hit a new kind of customer.

As it stands in Indonesia, where RedDoorz has been the longest and where it has most of its 500 properties — it claims to offer 3,000 rooms across 16 cities — the vast majority of customers are local and using the company’s Android app, rather than the tourist crowd. That crowd is roughly split between those on business and on leisure.

Saberwal said that typically 80 percent are made in a 72-hour window before check-in, with some 65-70 percent of bookings on a given day coming from returning customers. That means that the bulk of business is very hyperlocal and on the spot, meaning that RedDoorz focuses on advertising at railways stations and airports, rather than relying on Facebook as seemingly so many startups in Southeast Asia do for user acquisition.

With this new money banked, the company plans to go deeper in its existing markets to reach new cities, and move into Thailand, too. The company will also double down on tech, which is handled out of India, and in particular its AI-based pricing system that helps hotel owners manage dynamic pricing based on demand, inventory and time of day.

Zen Rooms, a competitor backed by Rocket Internet, is on the ropes and being shopped around for an acquisition, multiple industry sources told TechCrunch. Outside of hotels, the best shot at an acquirer might be India where OYO, fresh from raising $250 million, is keen to expand its Southeast Asia presence and rival Treebo is also casting eyes on the region, but RedDoorz itself could boost its business by merging with its rival.

“We’re happy to explore all options when they came along,” is all that Saberwal would say when TechCrunch put the question of a deal to him.

What’s more certain is that the company is bringing on senior hires that will make it “Series B ready,” to use the words of its CEO.