Restaurant delivery service DoorDash is joining the unicorn club with its latest round of funding.

The company is announcing that it’s raised $535 million in a Series D round. And while it’s not saying anything about valuation, a source close to DoorDash told us that the new funding values the company at $1.4 billion (post-money).

DoorDash had previously raised around $186 million, according to CrunchBase, most recently at a valuation of more than $700 million.

Asked whether that level of funding means that DoorDash is starting to think about an IPO, CEO Tony Xu said, “It doesn’t really change anything for us. Instead, we’re saying it adds more flexibility, giving us the optionality in terms of where we want to invest and how we want to think about financing for the company.”

The round was led by SoftBank Group, with participation from Sequoia Capital, GIC and Wellcome Trust. SoftBank’s Jeffrey Housenbold and GIC’s Jeremy Kranz are joining Sequoia’s Alfred Lin and Kleiner Perkins Caufield & Byers’ John Doerr on the company’s board of directors.

“DoorDash’s technology advantages, exceptional management team and relentless merchant focus are reflected in their stunning growth and impressive unit economics,” Housenbold said in the funding announcement. “Food delivery is just the first chapter. Tony and team have a bold vision to create the world’s best logistics company, and we’re thrilled to partner with them to help accelerate their progress.”

The company says it’s now working with almost 90 percent of the top 100 restaurant brands in the U.S., including Wendy’s, IHOP, and The Cheesecake Factory.

Perhaps even more impressive: Xu said the company became “contribution margin positive” in the last year, which means that it’s profitable on a per-order basis. In fact, DoorDash has become profitable in its earliest markets. 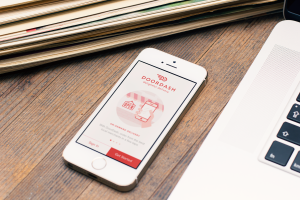 All of that might seem like an obvious necessity for a delivery business, but it addresses concerns that on-demand models only work when they’re subsidized by venture capital. Xu has said in the past that DoorDash’s logistics platform is sophisticated enough to make the business sustainable, and the latest numbers seem to bear that out.

“That really was the driving force for this financing,” he said. “We figured out that our thesis was proven out. Now is the time to take this operating playbook and accelerate growth.”

Those growth plans include expanding from 600 to 1,600 cities (DoorDash is still focused on the U.S. and Canada), as well as hiring 250 more people.

Xu said DoorDash will be making big investments in its Drive platform, which allows restaurants to offer DoorDash-powered deliveries through their own websites and apps, so they can serve “all of their customers in all of their channels.”

And, as Xu has long hinted, he also wants to turn Drive into a platform that serves a broader range of businesses, not just restaurants. He declined to get specific about those plans, except to say that we can “expect to see a few of those deliveries this year.”