Twitter today is publicly launching its “Bookmarks” feature, which has been in testing since late last year, following the company’s HackWeek project dubbed #SaveForLater. A desire to save content for later reading is something people have asked for because of how much news circulates across Twitter, often including links to longer articles you don’t have time to read in the moment, and an increased desire for privacy around their saves.

Twitter users sometimes found it uncomfortable to use the Favorite button for saving tweets because of the nature of the tweet’s content.

Shaped like a heart, the button indicates a positive sentiment – and that’s not always the case. There are often times when you need to later return to a tweet, without signaling that you like or support the content it includes.

Facebook, too, had grappled with a similar problem around its “Like” button. Though users asked for a Dislike option, the social network instead eventually rolled out emoticons for other sentiments, like anger, sadness, laughter, and love, to complement the “Like.”

Twitter, of course, doesn’t need to complicate its product with sentiment buttons, but it did need a way to save things you don’t “love.”

Another issue with using Twitter’s Favorite button is that the action is made public.

Twitter users have worked around the problem of not having a way to privately save tweets by doing things like DM’ing tweets to themselves, saving them in Notepad, emailing them, opening them in a new tab, and other tricks.

Starting today, they’ll no longer need to resort to this hacks, because bookmarked tweets are only saved privately. 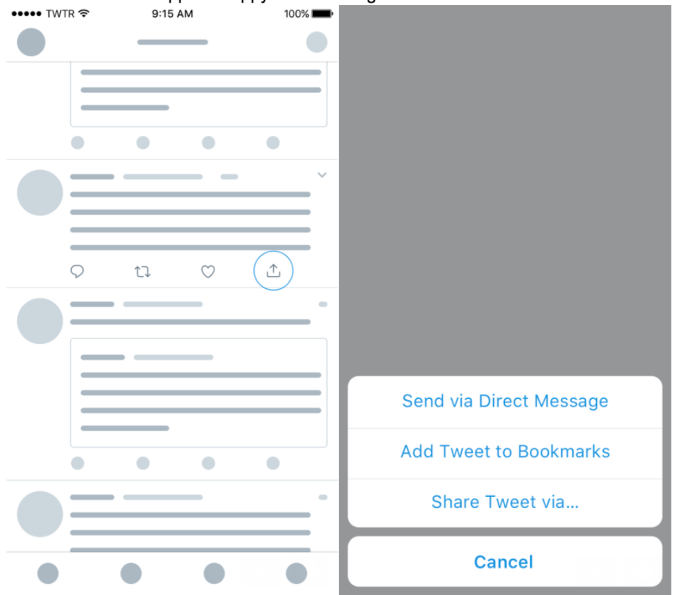 To use the feature, you’ll click on a new “share” icon that’s found to the right of the Favorite (heart) button. From here, you’ll have the option to share the tweet in a variety of ways – including by bookmarking it, DM’ing it, or via other methods – as had been previously available through the top-right dropdown menu.

When you want to view your saved tweets, you’ll tap your Profile icon to reveal the menu where the Bookmarks list will be found alongside other options like Twitter Lists and Moments.