Fitbit, which has increasingly had to fend off competition from devices like the Apple Watch and is increasingly making moves in the healthcare space, still hasn’t seemed to nail things down quite yet as it posted weaker-than-expected financial results for its fourth quarter.

The quarter was more or less a complete whiff, falling short of Wall Street estimates for earnings, revenue generated, and also the company’s outlook for the first quarter next year. That may be just a factor of the difficulty wearable device companies face going forward, as even though they can come out with new products and find niches, it’s not clear if users are going to continue adopting them. That explains some of the moves from Fitbit to further get into health care, but it looks like there’s still some ways to go as investors recalibrate their expectations.

The stock price, as a result, is crashing this afternoon after the company posted its results. It’s down more than 10% following the report, sending its shares back below $5. 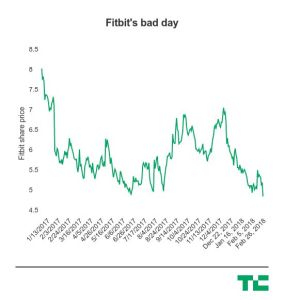 Fitbit, for example, recently said it would acquire Twine Health, a cloud-based health management platform. As Apple looks to increasingly lock up the general consumer market — and also make its own moves into healthcare — Fitbit has had to try to make some aggressive moves in order to justify its existence in a wearable space that’s getting more and more crowded with Android devices and the Apple Watch. It can do that by finding more niches to exploit, though it still releases products like the Fitbit Ionic watch.

A report like this does have a lot of implications, and not just for Fitbit. We’ve increasingly seen that the wearable market is a tough one, with Fitbit eventually acquiring Pebble and soon planning to cut off support for the watch. Some startups are going after niches, like Proof, a wearable that will track your blood alcohol content. All these niches may make more and more sense in a more general device, but given the efforts from companies like Apple, it’s not clear if there’s room for a more general device to exist right now without a whole suite of health application.