What if instead of blasting cargo into space on a rocket, we could fling it into space using a catapult? That’s the big, possibly crazy, possibly genius idea behind SpinLaunch. It was secretly founded in 2014 by Jonathan Yaney, who worked on his brother’s solar-powered drone startup Titan Aerospace that sold to Google. Now TechCrunch has learned from three sources that SpinLaunch is raising a massive $30 million Series A to develop its catapult technology. And we’ve scored an interview with the founder after four years in stealth.

Sources who’ve spoken to the SpinLaunch team tell me the idea is to create a much cheaper and sustainable way to get things like satellites from earth into space without chemical propellant. Using a catapult would sidestep the heavy fuel and expensive booster rockets used by companies like SpaceX and Blue Origin.

SpinLaunch plans to use a centrifuge spinning at an incredible rate. All that momentum is then harnessed to catapult a payload into space at speeds one source said could be around 3000 miles per hour. With enough momentum, objects could be flung into space on their own. Alternatively, the catapult could provide some of the power needed with cargo being equipped with supplemental rockets necessary to leave earth’s atmosphere.

After some hesitation about emerging from stealth, Yaney agreed to talk to TechCrunch about his secretive startup, and show us the image of SpinLaunch’s hangar seen above. “Since the dawn of space exploration, rockets have been the only way to access space. Yet in 70 years, the technology has only made small incremental advances” Yaney tells me. “To truly commercialize and industrialize space, we need 10x tech improvement.” 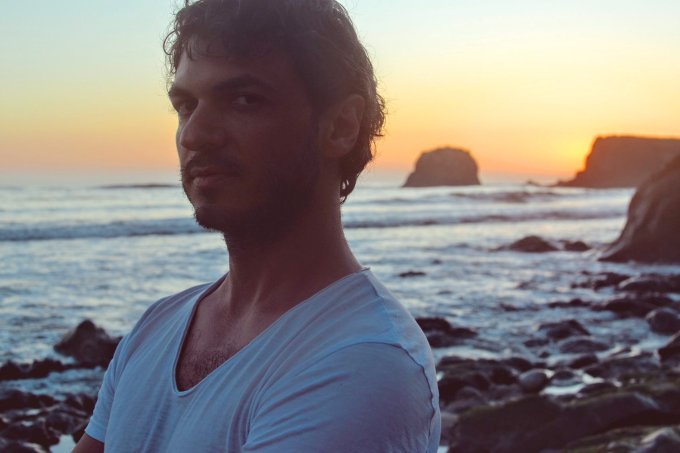 Until recently, few details about SpinLaunch have been available. SpinLaunch’s website is password-protected, and some Sunnyvale, CA job listings merely refer to it as a “rapidly growing space launch startup”. But last month, a bill was proposed in the Hawaii state senate to issue $25 million in bonds to assist SpinLaunch with “constructing a portion of its electrical small satellite launch system”. Hawaii hopes to gain construction contracts and jobs, and meet government goals for expanding space accessibility by helping SpinLaunch.

SEC documents show that Yaney raised $1 million in equity in 2014, the year SpinLaunch was founded, $2.9 million in equity in 2015, $2.2 million in debt in mid-2017, and another $2 million in debt in late 2017. Now Yaney confirms SpinLaunch has raised a total of $10 million to date, and that he’s personally an investor. As for the next $30 million, he says “The current status of our series A raise is that we are still taking meetings with potential investors and have not yet received an executed offer.” Yaney has been co-founding startups since 2000, including TriVance and Moretti Designs. But a passion for aeronautics led him to become a 1000+ hour pilot, and joined communications and imaging solar drone startup Titan Aerospace as a founding team member. It sold to Google in 2014 after receiving acquisition interest from Facebook, and Yaney began work on SpinLaunch to huck satellites into orbit.

NASA has investigated the possibility of catapult-assisted launches that fire off a track instead of a centrifuge, but none have become cost-effective enough to be successfully used to commercially launch things into space. 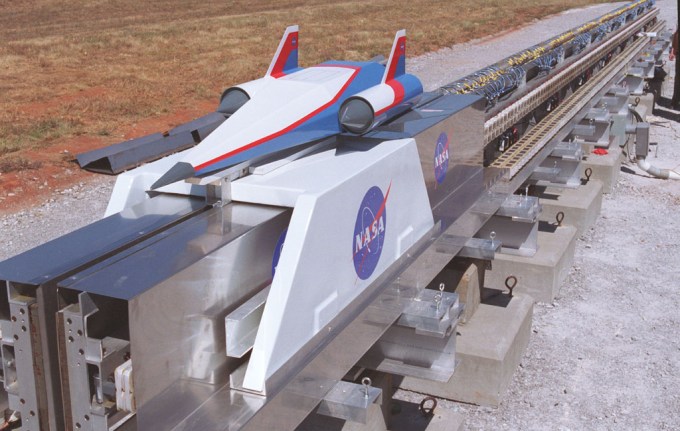 NASA has researched catapult-based space launchers that fire cargo off a track.

Yaney’s method is different. He says “SpinLaunch employs a rotational acceleration method, harnessing angular momentum to gradually accelerate the vehicle to hypersonic speeds. This approach employs a dramatically lower cost architecture with much lower power.” SpinLaunch is targeting a per launch price of less than $500,000, while Yaney says “all existing rocket based companies cost between $5 million and $100 million per launch.” 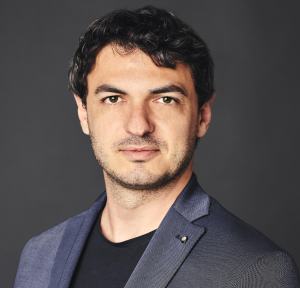 Two sources says physicists who’ve looked into the company said a potential challenge could be air resistance upon the cargo when the catapult fires. Earth’s atmosphere is so dense that it could be like the cargo was hitting a brick wall upon ejection. Any electronics or other sensitive materials in the cargo might have to be engineered to withstand intense G-forces. This all explains the pointy, aerodynamic launch vehicle shown in the photo up top.

Now it’s a question of getting that ship into space. “During the last three years, the core technology has been developed, prototyped, tested, and most of the tech risk retired” Yaney proclaims. “The remaining challenges are in the construction and associated areas that all very large hardware development and construction projects face.” Touching the heavens isn’t cheap, so SpinLaunch is talking to big institutional  VC firms that could afford to fund successive rounds.

If SpinLaunch can overcome the technical barriers, it could democratize access to space by lowering launch costs. That could accelerate a new era of zero-gravity innovation, from space travel to mining to what we once thought of as mere science fiction