Broadcasting app Anchor, which helps anyone record and share audio, is relaunching its app today with a new focus on serving the larger podcaster community. While in the past, Anchor was carving out a niche for itself in the short-form, social audio space, the new version – Anchor 3.0 – aims to be everything you need to record, edit, host, publish, and distribute a podcast of any length, as well as track how well the podcast is performing.

The changes follow Anchor’s close of a $10 million Series A from Google Ventures and Accel last fall, and arrive at a time when interest in podcasts is continuing to grow. Half of U.S. homes are now podcast fans, Nielsen has said, and 22 percent consider themselves “avid” fans. In addition, the rise of smart speakers with voice assistants has made it more convenient to listen to audio recordings in the home, helping to boost adoption further.

Anchor’s general belief has been that anyone should be able to easily record and share audio without the need for special tools or technical know-how. The new product represents a doubling-down on that belief, as it aims to remove the many obstacles that would-be podcasters face, from hosting fees, to the needs for special editing software, and the lack of insight into how well podcasts are being received by listeners, among other things.

Though Anchor had been targeting short-form audio, professional podcasters began using its app in greater numbers last year to take advantage of several of its tools. This included Anchor videos, which turns audio into shareable, video clips (which will be re-added to the new app in a later release), as well as a “call-ins” feature which allows them to receive voice messages from listeners that could be later integrated into a new episode.

But most of all, they were using the one-touch podcast feature that lets anyone record and distribute audio with a tap of a button.

“That’s when the floodgates opened, and we saw all this interest around podcasting, specifically using Anchor tools,” explains Anchor CEO Mike Mignano.

He says the team then looked to see how they could better serve their podcaster user base, and found that it was still surprisingly hard to create a podcast today.

“It seemed crazy how difficult it was to make an actual podcast. There’s the expensive microphone you have to buy, the difficult software you have to manage on your computer and learn. And there’s the process of uploading and paying to host your audio files,” he says. There’s also dealing with the podcast’s RSS feed, which not everyone understands.

The new app will now drop users straight into a podcast creation screen, with color-coded buttons for using Anchor’s various features in addition to the big, red “Record” button.

There are buttons for recording with friends; for call-ins (now called voice messages, meant for direct, private conversations); for adding music from Apple or Spotify; and for adding transitions from Anchor’s built-in library of sounds.

As you create and use these components, they appear as drag-and-drop modules in a visual editor on the screen, so you can move them around to create your podcast episode.

This all color-coded as well, as is a bar at the top of the screen showing the length of each audio piece you’ve assembled. And Anchor has dropped the 5-minute limit on recording your voice, too. 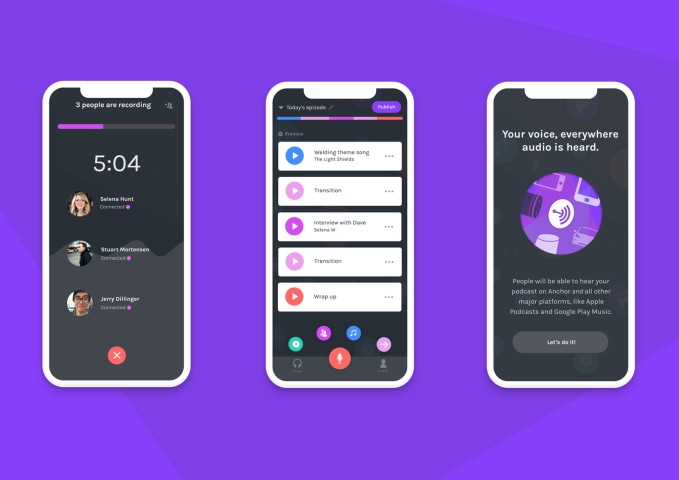 Anchor will also now host your podcasts for free, and allow you to easily import your back catalog if you want to make a switch from your current hosting provider. There are no limitations on who can use this feature.

“In 2018, this is just the way it should be – there shouldn’t be hosting fees holding people back from this,” says Mignano. 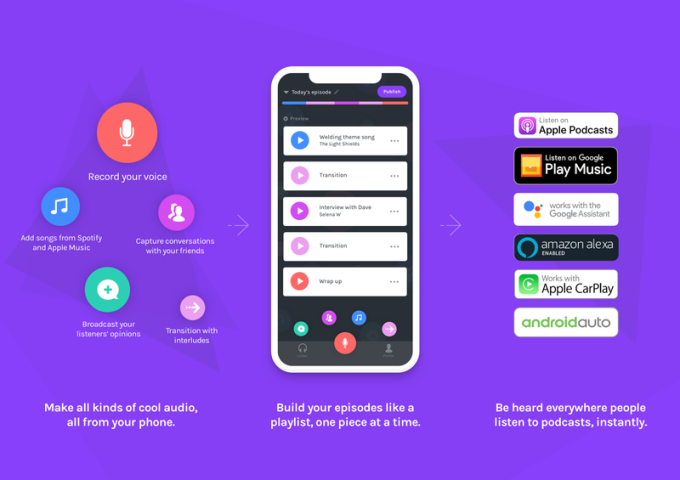 Also in the new app, and to a greater extent on the web, Anchor now offers podcast analytics which show things like plays per episode, total plays, downloads, and more. On the web, these are available as charts and graphs, and there’s a section showing which platforms listeners are coming from, too.

The web version offers a more advanced editor with the ability to upload audio files from your computer and re-use recordings from your Anchor history. 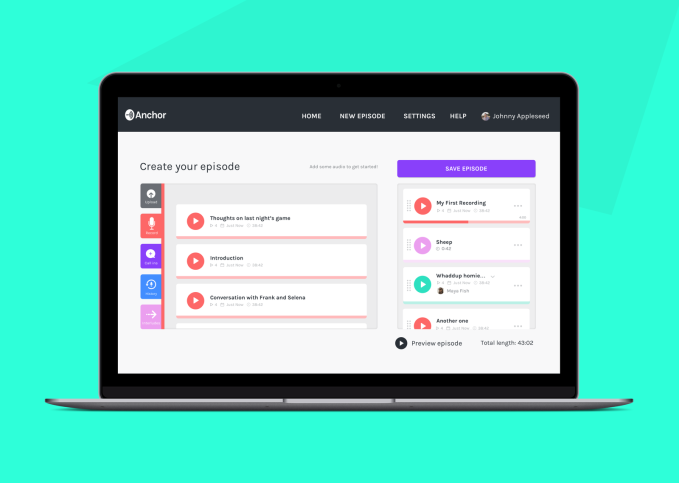 Of course, there is one concern for professional podcasters migrating to Anchor’s platform – and that’s whether it will be around in the long-term.

For now, the company isn’t generating revenue – it’s living off its funding. Podcasters who pay for hosting or self-host don’t generally have to worry with whether they’ll one day have to quickly migrate elsewhere because the company is shutting down or being acquired – and that’s always a concern with startups.

Mignano says Anchor’s plan is to eventually introduce monetization tools for podcasters, which will play a role in Anchor’s business model. (Specifics were not available, but Anchor would likely take a cut of the revenue it helped to generate, as is standard.) This seems like a good bet, especially considering how popular the format has become.

Along with hosting, every podcaster gets their own custom URL for their show, which includes buttons to subscribe anywhere its hosted – like Apple Podcasts, Google Play, etc. 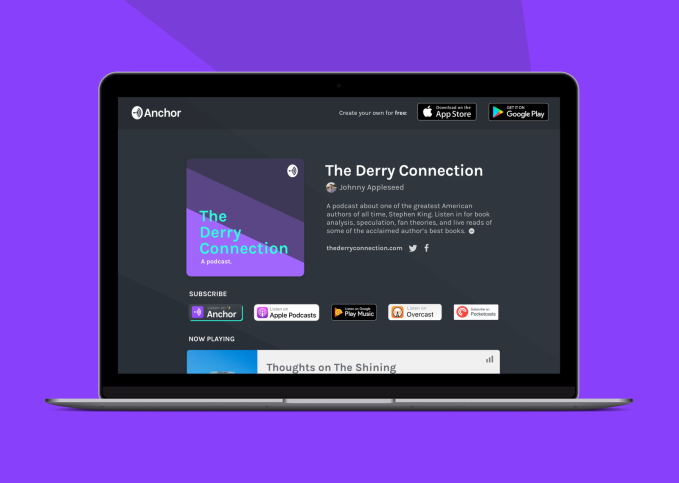 Partners, and other Anchor broadcasters, will continue to see their work featured within the app, as before, but in a redesigned “browse” section that has more of an iTunes-like look-and-feel.

Anchor 3.0 is rolling out to iOS and Android, and on the web, starting today.