Eight years after Amazon snatched up the daily deals site Woot!, the retailer is now leveraging the site to serve as another perk for Prime members. Woot! this morning announced that it will begin offering free shipping on purchases from its site to all Amazon Prime members.

Woot!, which was founded in 2003, is no longer the household name it used to be back when Amazon acquired it in 2010 for $110 million. At the time, the site had gained popularity for its gimmick of “one deal per day,” which drove engagement, traffic and, of course sales, as quantities were limited. 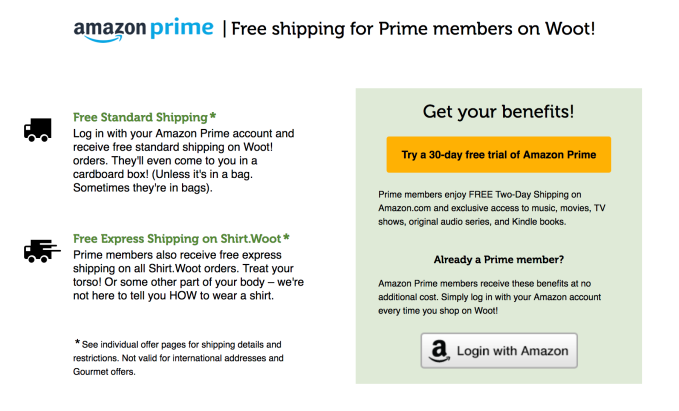 Woot! was also well-known for its sense of humor, which continues today with its announcement of the Prime deal. In it, the company writes: “YEP. YOU’RE WELCOME,” and then proceeds to quote its monkey mascot, Mortimer.

In the years following Amazon’s acquisition, Woot! distanced itself from the one-deal-a-day format, and now features a variety of special deals, including several limited-time offers across categories like computers, electronics, home and sporting goods, and more.

However, it makes sense that Amazon would bring Woot! into the fold, given that roughly a third of Woot!’s traffic comes from Amazon.com, according to data from SimilarWeb, which also claims the site saw 16.8 million visits in January, 2018.

This is not the first time Amazon has brought one of its subsidiaries into the Prime membership program. In September 2016, Amazon added free audiobooks and podcasts from Audible to its list of Prime perks, and a variety of upgrades and special features for gamers with the launch of Twitch Prime.